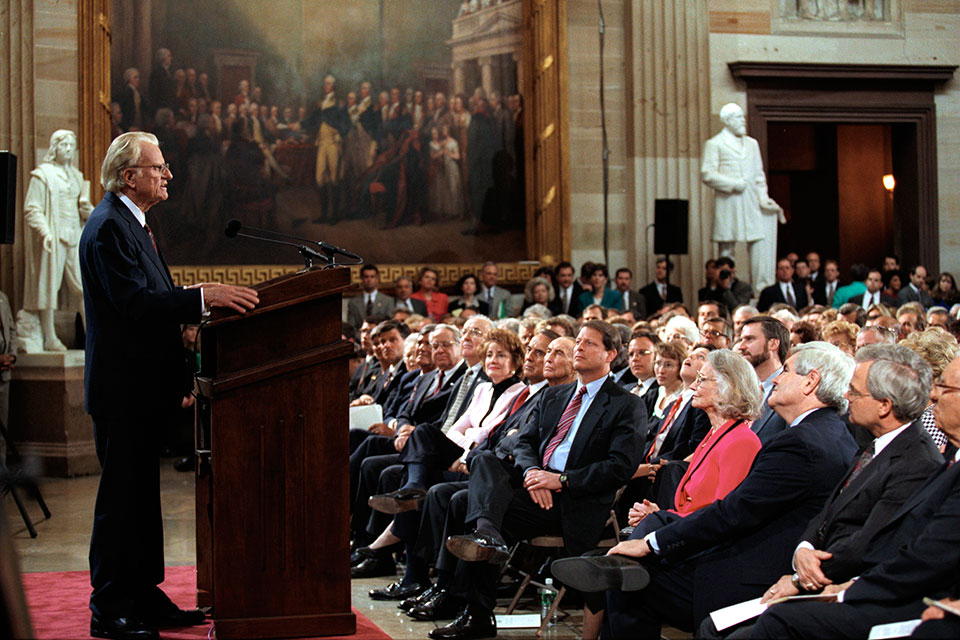 “My one purpose in life is to help people find a personal relationship with God, which I believe, comes through knowing Christ.” (Billy Graham)

1. William Franklin Graham Jr. was born on November 7, 1918 near Charlotte, North Carolina and died on February 21, 2018. He converted and gave his life to Christ in 1934 at the age of 15 during a revival. He studied at Bob Jones College, Florida Bible Institute (now Trinity College of Florida) and Wheaton College, where he met his wife, Ruth.

2. Graham was a member of the Southern Baptist Convention and began his work as a traveling speaker for Youth for Christ. He held his inaugural crusade event in 1947 and received national attention at the Los Angeles crusade of 1949, where hundreds of thousands of people attended over the span of eight weeks. He traveled the world and held large evangelistic events that reached millions in places as diverse as Ethiopia, Russia, and New Zealand—nearly 100 countries total. His ministry spanned several mediums, including radio, television, and print. His most famous program was “The Hour of Decision,” featured on radio and television.

3. The Billy Graham Evangelistic Association claims that that 3.2 million people made personal faith decisions as a result of his preaching. He reached a total audience of 2.2 billion through radio and television, books, and events. He led over 400 crusades across the world.

4. Graham held traditional Baptist theological positions, including belief in the divine inspiration and infallibility of Scripture and the importance of having a personal relationship with Jesus Christ. He broke with many in his denomination in affirming inclusivism—the conviction that one does not necessarily have to explicitly hear or believe the gospel in order to be saved. His revivalism and “easy decisionism” put him at odds with other theological leaders, including Karl Barth, whom he met on several occasions.

5. Graham held several controversial views which singled him out in American culture. He once made an anti-Semitic remark to President Nixon, which he later renounced. He broke with the dominant Southern culture by increasingly supporting civil rights and desegregation, and enjoyed a warm friendship with Martin Luther King Jr. He also championed what became known as the “Billy Graham Rule,” an attempt to maintain sexual integrity by not being alone with any woman other than his wife. As can be expected, he held traditional views on marriage and sexuality.

6. Graham had friendships with people of high social rank and occasionally had them testify at his crusades. He met with Queen Elizabeth II several times and even preached at Windsor Chapel. George W. Bush credits Graham for his own spiritual renewal. Although a spiritual advisor to every president from Harry Truman to Barack Obama, he tended to stay away from politics and distanced himself from the campaigns of the Religious Right. Graham claims that meetings with people of celebrity were at their request, not his.

7. Graham’s legacy centers on his passion for evangelism which led to his renown crusades and revivals. He was the founder of Christianity Today (with Carl F. Henry), a leading Christian journalism magazine, and the Lausane Movement, which originally met as the International Congress on World Evangelization. The Billy Graham Evangelistic Association today employs some 500 people.