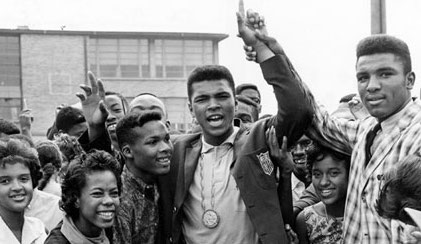 2. Ali changed his name to Muhammad Ali in 1964, leaving behind what he considered to be a “slave name,” and joined the the Nation of Islam (NOI) during the 1960s and advocated for black equality during the US era of segregation.

3. Ali won three World Heavyweight Champion titles, fought 61 times, and won 56 of those, including 37 knock-outs. He also won an Olympic gold medal in Rome. He was named “Sports Personality of the Century” by BBC.

4. Citing his religious beliefs, Ali refused to serve in the Vietnam War in 1967 as a conscientious objector. He was found guilty of draft evasion but the ruling was later overturned by Clay v. United States when the case was taken to the US Supreme Court.

5. The international community celebrated Ali’s activism as he worked to help developing nations. The United Nations named him a Messenger of Peace, and he was awarded the Presidential Medal of Freedom, as well as Amnesty International’s Lifetime Achievement Award.

7. Ali was diagnosed with Parkinson’s Syndrome, and died at age 74 in Phoenix, Arizona from Septic Shock.