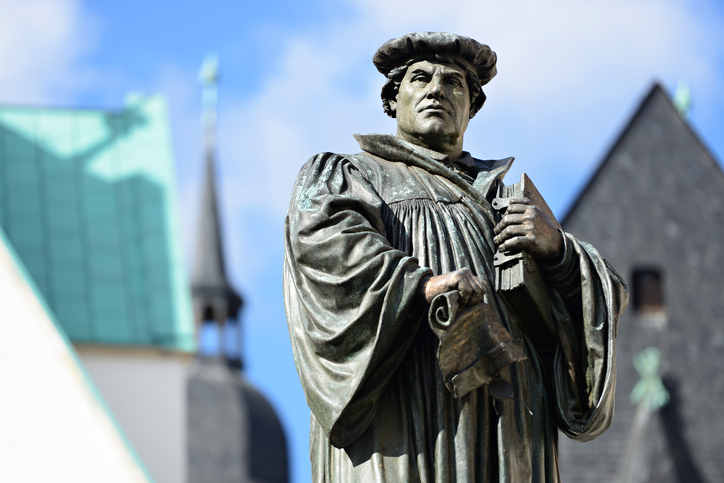 On October 31 in 1517, Martin Luther nailed his 95 Theses (read the document, also known as “Disputation of Doctor Martin Luther on the Power and Efficacy of Indulgences”) to the door of Castle Church in Wittenberg. As a result, many observe October 31st as Reformation Day. The year 2017 marks the 500th anniversary of the Reformation.

1. Jan Hus, Peter Waldo, and John Wycliffe are just three of several church leaders who preceded Martin Luther and the 16th century Reformation by working to reform the church on such matters as the accessibility of Scripture, free preaching, and papal reform in the 15th century. Unfortunately, they suffered as martyrs for their faith and their movements never spread.

3. The Protestant Reformation helped propel the spread of literacy, since one of its emphases was personal piety and appropriation of Scripture, including the use of catechisms for children. In Germany, literacy rates ranged between only 5-30% before the Reformation (source).

4. The Anabaptist tradition, also known as the Radical Reformation, emphasized the role and calling of the Holy Spirit on the life of the believer, and therefore welcomed women as ministers, including in preaching roles. Leaders such as Agnes Linck, Ursula of Essen, and Maria of Monjou were persecuted and even martyred for their roles in their faith communities.

5. Part of the Roman Catholic church’s attempt to curb the spread and influence of the Reformation (known as the Counter-Reformation) was increasing the complexity and exuberance of its art, music, and architecture. It hoped that this would draw the public away from the duller approach of Protestants to worship, art, and liturgy.

6. The Reformation resulted in many socio-political conflicts that culminated in the 30 Years War (1618-1648) between a Roman Catholic royal family and Protestant princes, which killed 25-40% of Germany’s population.

7. The Council of Trent was summoned in 1545 as a response to the Reformation, and attempted to refute the movement’s theological moorings. It confirmed the Roman Catholic church’s teaching on purgatory, the affirmation of the Apocrypha, church tradition as a supplemental source of authority for Christian teaching, and the use of induldgences, though it sought to reform the practice.