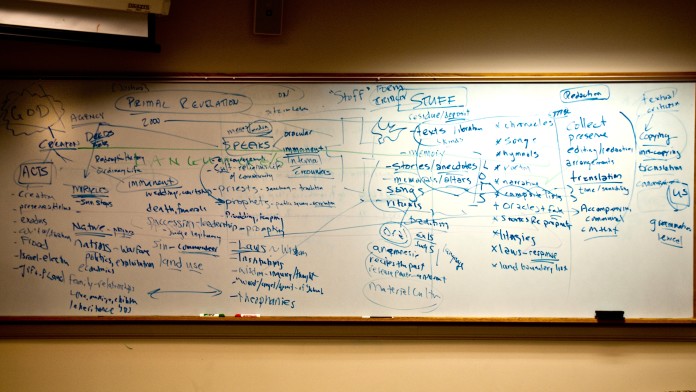 No doubt about it. The most worn out and frequent cliché in the realm of biblical study and teaching is the cry to “Make it Relevant!” One one level, of course, truth lurks in the cliché, which is how it got to be a cliché in the first place. The truth is the obvious one to believers, namely that the Bible exists not for our information but for our transformation. God’s word came not to make us smarter, but to make us holy. Jesus calls us to be followers, not just fans. So… let me stipulate at the start, I get that.

Otherwise, so much is wrong with this cliché it’s hard to start. Like the proverbial mosquito in a nudist colony. I know what to do but it’s hard to see where to start! Forgive me if I dive in at the deep end!

The main idea here is that somehow the Bible is not, itself, relevant to contemporary life until the teacher, preacher, scholar bestows or imparts “relevance.” The imperative implies this is not just a good thing, but something that, if it doesn’t happen, leaves the whole enterprise barren and void, at best. So somehow, coming to new insights, new information about scripture, a better understanding of its background and content,  is a failure unless we can point to a “bottom line” or immediate “pay-off.”

The assumption that the Bible isn’t relevant on its own until  we “make” it relevant actually positions the teacher as rescuing the poor Bible from being doomed to obscurity and loss, when in fact this is far from true. Sadly this view makes the interpreter of the Bible the hero rather than the God of the Bible! The Bible has a peculiar quality of perennial relevance that has both a divine origin and a human mechanism.

The divine origin is what we confess when we say we believe it is the “Word of God writ,” that it is “inspired by God.” Face it. We have no idea what this actually means, except that we know it means this collection of writings as a whole, and in its details, stands as the definitive, God-given source and criterion for faith. This divine origin means that relevance is rooted in the eternal address of God to a lost world and his quest for a rebellious humanity.

More profoundly though, the Bible’s “relevance” is bigger even than our redemption. Eternally, in the three-in-one reality of God’s being, the Father “begets” the Son, who proceeds from the Father not merely as Son, but as the Word, the Word that was “with God from the beginning” and was, in fact, God himself, a second time. The Uttering and Uttered

God, Utterly God. So it’s built into God’s being eternally to give expression as the Father and be expressed perfectly as the Son…  Wired into the very DNA of the Bible is this eternal divine self-giving via the Word. This is bigger than our redemption because it is before, eternally “before” our redemption, and will still be true once the plan and story of redemption have reached their culmination.

The Bible’s eternal relevance as God’s speech within the godhead, and as God’s saving speech to unworthy, unlistening rebels, has a peculiarly human face in the scriptures. This has to do with how the Bible actually came to us.

I love to start my exegesis classes each semester with a fun exercise. On the board, I put a triangle in the upper left, representing God, and a silly little face with a book in the lower right corner. I then ask the students a question. They have already had their OT and NT Introduction courses, a beginning Hebrew course, and probably also a basic

introduction to the “text craft” of biblical studies. I ask them this: What did God do to get his word of truth out from behind his eyeballs and into the space behind our eyeballs? What was the actual media or method of God’s workflow in getting his word into written form and in our hands, heads and hearts?

The remaining 70 minutes are always fun. We talk about all the ways God expressed himself to humanity as evidenced in scripture itself, but also as learned in the study of OT and NT introduction and history: miracles, “wonders” (natural stuff happening in creepy and unnatural ways), providence, creation, calling people to follow, etc. We talk about the creation of a distinct people, Israel, and their history as family, clan, people, tribal alliance, monarchic state, rival kingdoms, exiles, colonists, subjects of the Roman empire… you get it. We then talk about all the institutions, life contexts and the various forms of expression that arose from these: stories, songs, prayers, poems,

Of course, there are very few clear “stages” in all this. It’s not a tidy evolution or unfolding, phase by phase. It’s organic, it all happens at the same time, interactively and inter-reactively. There isn’t an “oral” stage and then a “written” stage and then “canonization.” It’s all intertwined, recursive. And God keeps acting even as his people listen, respond, screw up, wipe out, try again. So then they retell the story with a layer of insight from their sin and suffering. Things get lost, found, framed and reframed. Rinse, repeat.

This mass of expression arising from Israel’s passionate lovers-quarrel with a God who won’t just leave them alone keeps growing. The mass includes points, counterpoints, faith and doubt, ritual lovers and ritual haters,  people who feel this life is the end-all, people who look beyond. Some think we build the city of God, others say the New Jerusalem will come down out of the sky, straight from God. It’s all there. The mass of stuff (scholars use the oh-so proper word “tradition”) grows like a tree, new layers of wood forming over the old layers, layer on top of layer, except that it’s language, so it’s transparent. All the layers can be seen from the surface, though some are barely visible, all are refracted, reflected, focused or blurred, by the surrounding network of scriptural voices. All voices still speak, even though in concert with other, often contrasting voices. At each point, this mass of expression is in urgent contact with the real

crises and needs of ancient Israel and Judah. It is always faithful to convey God’s past actions, but always pertinent to the age in which it is remembered, re-experienced, re-applied, and re-expressed. It’s the past, but the past with a punch.

Over time, this mass of material achieved a critical mass. Intuitively, those who reflected on it stopped adding directly to it increasing the mass of the tradition itself, but instead start writing commentary and notes, or pulling excerpts and blending them in self-consciously secondary, derivative compositions, collages of scriptural allusion. The text, by its own trajectory and inner dynamics, attains a place as the touchstone for all thinking about the faith: we call that the “canon.” Canonicity isn’t about councils and votes, excluded or included books. It’s about a mass of expression arising out of a divine-human dialogue over centuries, arriving at a point of maximum capacity to shape faith.

The text itself is not “timeless” in the sense of fixed, eternal, abstract, like the axioms of geometry. It has been pertinent to every age it has passed through, so now it has within itself the capacity to speak to any age. It is not timeless… it is ever timely. Of course, it has emerged from an interaction with the eternal God and the changing fortunes of his human community. The divine origin, the human mechanism. Embodied truth, captured in a unique textual form.

And that is the text that sleeps so quietly between the covers over our Bibles. It is not a “book” properly so-called. It is a gaggle of preachers, poets, singers, kings and pundits, arguing with God, arguing with each other, and we get to listen in on their ages-long passionate dialogue with God, a dialogue that we “over-hear” and in hearing what God said to them so long ago, we find ourselves hearing God speak to us as well.

So really, the problem is not how to “make the Bible relevant.” The problem is… what has happened, what has made us so sick, so inept, so dull, that we can actually force all this life and urgency back into the box, snap the lock shut, and not be completely unmade by it every time we read it?

Note: The images in this post are photos I’ve taken of the board after sessions of this particular class time  for the last 15 or so years.