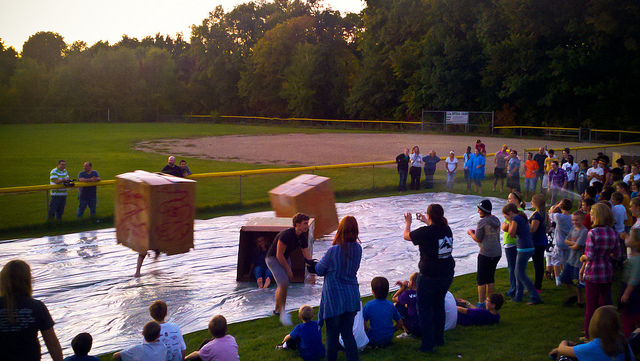 A team relay game where students run down a slippery tarp while covered in a moving box! My most requested student game EVER!

Place the box over the first person in line. Yes, they can’t really see.  Yes, they can hardly move due to the big box.  Yes, they are “running” and can’t see the person coming at them.

On “GO”, the person needs to make their way across the tarp (soapy and wet) to their teammate waiting on the other end.  Teams can yell and encourage helping the boxed teammate find their way. If players run into each other, which they will, they just get up and keep going.  (which if its slippery may take a few tries)  Honestly, this is the best part of the game!

Once the player reaches their teammate, they take off the box and place it on the next teammate.  Repeat.

First team through all their players wins.  (Note: the box will begin to fall apart as you play.)

Note:  Game is really wet, gets messy, and usually turns into chaos …which means it’s the perfect game!

Check out the youth at Dunwoody UMC playing Box Wars: