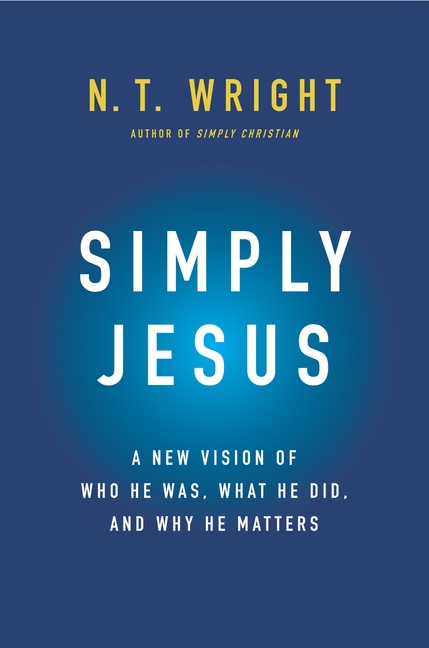 Books on Jesus abound—why the need for another one? Aren’t the four Gospels and subsequent letters of the New Testament sufficient for us to understand him? Well, not necessarily so, claims New Testament scholar N. T. Wright in his book Simply Jesus: A New Vision of Who He Was, What He Did, and Why He Matters (HarperCollins, 2011).

“Jesus was not simple in his own time and he is not simple now.” (xi) The reason being, our own cultural lenses often color our reading of Jesus in a way that skews his identity and vocation. Through informed, historical reading, Wright attempts to place Jesus squarely in his first-century context and subsequently reveal what portrait makes sense of the evidence available to us.

For those who are familiar with Wright’s scholarly work, nothing in this book will be surprising. It is essentially a popular-level summary of his work on Jesus, particularly, Jesus and the Victory of God. He divides this work into three sections: identifying the important questions pertaining to Jesus, overviewing what Jesus was trying to accomplish, and answering why this all matters.

The questions raised by the person of Jesus pertain to his world, his God, and his behavior. Wright contends that any accurate portrait of Jesus needs to make sense of two, great first-century phenomena converging into the “perfect storm.” They were, 1) the Roman storm—an evil empire bent on violence with Caesars claiming divine status and universal rule, and 2) the Jewish storm—the anticipation of a new exodus and delivery from captivity by the hand of a Messiah figure. In the person of Jesus “was where the hurricane of divine love met the cold might of empire and the overheated aspiration of Israel.” (39)

In part 2, Wright overviews the ministry of Jesus, answering, “What was he trying to accomplish and how?” Wright suggests that what God promised to do in the Old Testament, namely, deliver Israel from captivity and bring his justice to earth (a new exodus), Jesus believed was happening in his ministry. According to Jewish Scripture, God was to be king, and Jesus was announcing the inauguration of this kingdom in and through himself.

So what was so unique about this claim? Well, if Jesus must be understood in his historical context, Wright provides just that—a long exposition of key figures and themes in ancient Roman and Jewish history. The important points to notice here are that Jesus’ ministry ran contrary to nationalistic claims to messiahship by Jews (ranging from 164 BC – 135 AD) and parallel to claims of lordship by Roman Caesars. But unlike any other figure, Jesus uniquely combined elements from the Old Testament narrative of the coming of God’s kingdom (Isa. 52:7-12) with the suffering servant (Isa. 52:13–52:12). (173)

Jesus was announcing the coming kingdom of God, but redefining it as a subversive, inaugurated kingdom that was centered on the kind of people and values that the ancient world considered to be weak and shameful. God’s kingship and rescue was coming through weakness and death. But the signs were there, and the vision was cast—healings, forgiveness, and deliverance from demons. This is what the kingdom, fully realized, will look like.

Also, Jesus redefined where God dwells. Whereas the Temple used to be the special merging place between heaven and earth, Jesus spoke as if he were the new Temple, in person. Both of these claims of kingdom and worship would certainly gain the attention of Jewish religious leaders and Roman rulers appointed to manage the Roman empire.

In part 3, Wright attempts to make sense of it all for the 21st century world. His basic suggestion is that God always wanted to rule through people, and in the New Testament, this means his Church. The Church must inhabit the kingdom by reflecting the lordship of Jesus in ways modeled by his earthly ministry: “When God wants to change the world, he doesn’t send in the tanks. He sends in the meek, the mourners, those who are hungry and thirsty for God’s justice, the peacemakers, and so on.” (218). The way of the kingdom is love, no coercive power. Among those models as saints are William Wilberforce, Desmond Tutu, and Cicely Saunders.

Simply Jesus accomplishes its task of painting a portrait of Jesus that is both coherent and compelling (notwithstanding he doesn’t provide a method for his history, which may be a defect in our skeptical age, and which is criticism he’s received from scholar-colleagues). Nonetheless, the kingship theme offers a coherent explanation of the literary sources, as well as the high irony that is missed in so many contemporary readings of Jesus’ vocation, both religious and secular.

The historical reading Wright provides also undercuts certain beliefs especially popular in North America. This is the “new” part of his proposal. For example, several times in the book Wright tries to move his readers away from mere piety and personal fulfillment so common in evangelicalism, suggesting instead that ultimately the gospel is about the person of Jesus and his kingdom. In this way the gospel must remain firmly christological.

Also, it questions certain apologetic readings of the Gospels which understands them as attempts to prove Jesus’ divinity. “The Gospels are not about ‘how Jesus turned out to be God.’ They are about how God became king on earth as in heaven” (149). Finally, Simply Jesus challenges the common dualistic and Deistic thinking that conceives of heaven as “out there” and earth as the place Christians are trying to escape. Wright claims that Rapture theology, for example, is entirely unfounded and misses the historical contexts of passages referencing Jesus’ return (Matthew 24, 1 Thessalonians 4, Revelation). He urges readers, “You’re not supposed to be able to draw the scene in a sketch-pad” (200).

This book succeeds in offering a fresh vision of Jesus that is grounded in God’s acts in history, not detached, “spiritual” piety. Also, though the details can be cumbersome to read, his style is winsome and has a good measure of evangelistic appeal in our skeptical culture. Wright often appeals to non-Christians asking them to “suppose,” or “imagine,” what God would be like if he did exist. This approach seems promising.