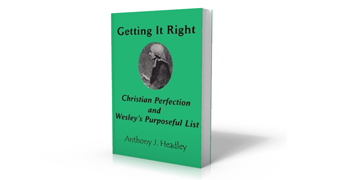 What’s with this title Getting it Right? Isn’t it rather gaudy and pretentious? Doesn’t it appear the invention of some egomaniac who thinks he possesses the ultimate answers about Christian perfection? Perhaps you had similar questions when you first saw the title. I wouldn’t blame you. It does sound a bit grandiose and pretentious. However, the title simply tries to capture John Wesley’s characteristic way of speaking about Christian perfection that I try to capture in the book.

For Wesley, Christian perfection always began with the right heart. He saw the right heart as that purified and dominated by the love of God. In close connection, he typically referred to right thinking, synonymous with having the mind of Christ. These inward dynamics of holiness found expression in outward holiness made visible in right words and right actions. One might consider this path Wesley laid out as a kind of order salutis, though not in the classic sense of the word.

I first detected this pattern while reading A Plain Account of Christian Perfection. Though previously read, I had not detected this intentional ordering of words. But on this occasion I could hardly miss the oft-repeated list. Its recurrence suggested to me that it was not accidental but intentional. It represented a purposeful list Wesley deliberately crafted to communicate his inside out understanding of holiness. A poem in the book provided a good example:

O grant that nothing in my soul

May dwell, but thy pure love alone!

O may thy love possess me whole,

My joy, my treasure, and my crown!

My every act, word, thought, be love!

One quickly observes the centrality of love in the poem. This was quite fitting given its emphasis in Wesley’s concept of Christian perfection. At the end of the stanza, one finds the other elements of his purposeful list. However, the list comes in reverse form. Doubtless, love at the end comes as an instance of poetic effect; that is, it serves as a rhyme with the word remove in the previous line. But Wesley preserved the normal sequence of his purposeful list in reverse. The poem and the revamped order intentionally preserved his notion that God’s love was the foundational element in holiness and the spring of all transformed inner dispositions and outward behavior.

This deliberate ordering of the holy life appeared in other places besides A Plain Account of Christian Perfection. In fact, once one detects this purposeful list, the pattern is easily observed across Wesley’s writings. It is veritably ubiquitous. Moreover, Wesley applied the ordered language even to non-Christians. He often described them as having evil hearts and thoughts and engaged in evil words and works.

What was Wesley’s source for this purposeful order? In chapter two of the book I described several possible sources. These included the Church Fathers and the influence of Catholic and Anglican writers including William Law. However, I argue that Wesley supremely drew his purposeful order of Christian transformation from the Scriptures, especially from Jesus’ Sermon on the Mount. The order appears in the Beatitudes where one finds the inward elements of transformation eventuating in the pure heart. But one also finds emphasis upon the outward expressions of inward transformation. Not surprisingly, Wesley devoted thirteen sermons to the Sermon on the Mount, all interpreted in the light of holiness. As might be expected, they come replete with many instances of the purposeful list.

For Wesley, such transformation was never static but dynamic. One could be made perfect in an instant, but continued growth was absolutely important. How does this happen? For Wesley, it meant participation in both the institutional and prudential means of grace God provided. These and other ideas form the critical elements in Getting it Right. In a nutshell, these elements form a critical hub in Wesley’s view of Christian Perfection.