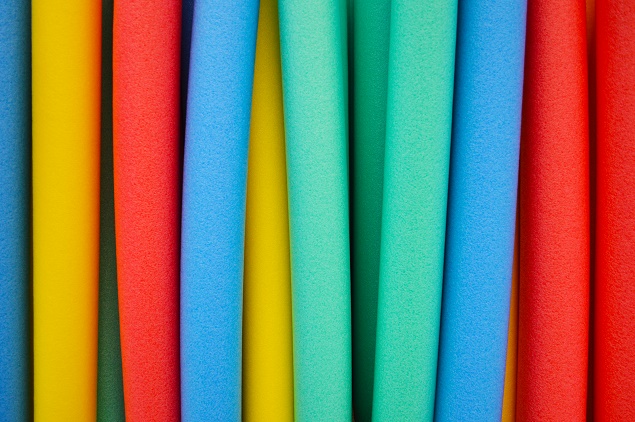 Leave a noodle lying out in any facility or park and fun will eventually rust.  Their bright colors and ability to be thrown, slung, stomped and thrust without any damage to the other people involved mean that these are the only inspiration you need to some incredibly fun games. Now, take the same noodles and cut them in half.  What do you have?  Twice the fun! Here are five great games using our favorite game tool!

Have everyone stand in a circle and share their name.  Invite one player, or whomever’s birthday is closest to the day you are playing, stand in the center of the circle, holding the half noodles in each hand.

They can not call the name of the person who called them, or the players to their immediate right or left, and can not move or dodge the noodles.

If a player who’s name is called gets hit, calls out an incorrect name, or moves, they go in the middle with the pool noodle and the prior center  person calls out the first name, to begin a new round.

Ridiculous Option: Have the middle person close their eyes or be blindfolded.

Have several 3-D shapes in mind, depending on the number of participants and degree of difficulty you want to impart.

Game: Challenge the students to create 3-D shapes – Cube, cuboid, square-based pyramid, tetrahedron, triangular prism, hexagonal prism, etc. You can adjust the game with giving a time period, set teams against each other, or have them see how many they can create.

Ridiculous Option: Blindfold the participants or only allow one of your more quieter students the ability to speak. You can also make the stipulation that edges have to be equivalent to a full noodle, forcing them to figure out a way to support the half noodles.

Place the trash can (or other object) in the center of the playing area.

The participants get into a circle around the trashcan and hold a noodle between each participant.  If a player touches the trash can in any way, they are out.  Also, if a player break their grip on one another, they are both out.  Play pauses after elimination, giving a time for players to reconnect.

Ridiculous Option: As players are eliminated, scatter their noodles between the circle and trash can,

and players are eliminated if they touch either the trash can or noodles.

Set clear boundaries for the playing area. Determine what is the appropriate bodily area that players can be tagged in. Determine who will be the first tagger by who has the longest hair.

Game: Just like tag, but must be tagged with the noodles inside the boundaries and in the correct bodily area.

Ridiculous Option: Have multiple taggers to start, or as people are tagged, they receive noodles of their own and become taggers

Arrange the noodles in a circle in the center of the playing area. Deal four cards to each player, and once all are dealt, players can look at them.

The dealer (person that last consumed pasta noodles) picks up a card off the top of the deck to have five cards.  They remove one and pass it, face down, to their right.  Each player discards to the person on their right, face down.  The last player, sitting to the left of the dealer, places the cards on a trash pile.  Cards are picked up and passed quickly, until someone gets four of a kind and takes a noodle from the center.  Once the player takes a noodle, anyone else can take a noodle. The player who does not pick up a noodle receives the next letter in the word S-P-O-O-D-L-E. Spell it and you’re out.

Players can reach for noodles in a variety of ways. A sneaky pull shows who is focused on their cards, a quick grab can create a frenzy.  Instead of placing the noodles in the center of the game, place them on the other side of the gym, down a narrow hallway, or have a non-player hide them in a nearby space, out of view.