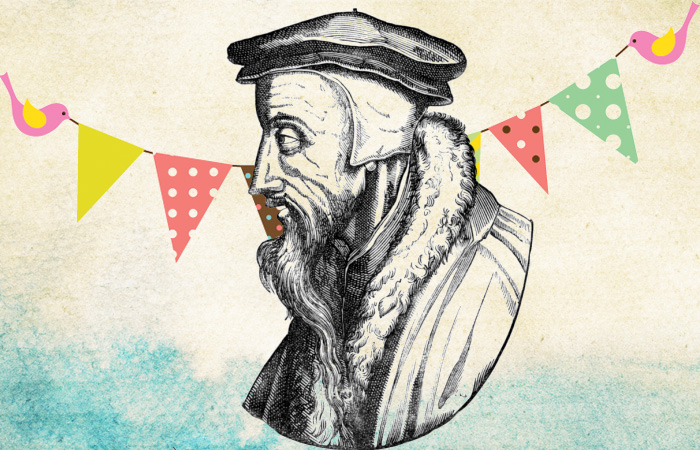 1. Calvin was a lawyer by training and a scholar in the humanist tradition, meaning he believed in the value of human solidarity and studying the classical disciplines,  including linguistic mastery over Greek and Latin (following the renaissance mantra ad fontes, “return to the sources”).

2. It is debated whether Calvin ever had an evangelical conversion experience. He does claim that after a certain point early in his ministry he was struck by an intense desire to pursue true godliness.

3. While still in France, Calvin became a fugitive when his friend, Nicholas Cop, delivered an address to the College Royal advocating reform in the Catholic Church.

4. In 1536, Calvin intended to stay in Geneva, Switzerland for just one night on his way to Strasbourg, France, a safe-haven for reformers. His Genevan friend, William Farel, insisted with divine authority that he stay in Geneva for a time. Calvin, intimidated by Farel’s furious insistence, reluctantly agreed.

5. Worship in Calvin’s Genevan church excluded the use of instruments and singing was limited to the Psalms.

6. Calvin authored two catechisms: Instruction in Faith and the Geneva Catechism. He wrote the latter after he realized the first one was too complex for the general reader.

7. Calvin remained lifelong friends with numerous reformers, including Philipp Melanchton and Heinrich Bullinger. Calvin’s Consensus of Zurich, a document expressing unity regarding the nature of the sacraments, aimed for Lutheran-Calvinist unity. While it was initially well-received, the document ultimately proved unsuccessful.

8. Though hardly remembered for it, Calvin was very concerned with the spiritual development of children.

9. Calvin affirmed that Christ was “spiritually present” in the eucharistic elements, a mediating position between the Lutheran view of real presence and the Zwinglian view of symbolic presence.

10. Of the 80 chapters found in Calvin’s Institutes of the Christian Religion, Calvin only devotes 4 to explaining predestination.