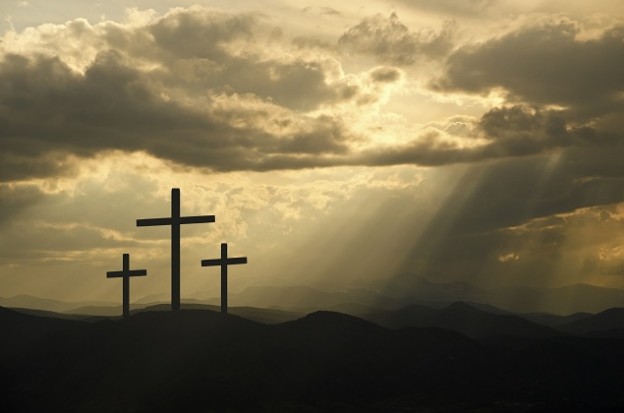 Holy Saturday is one of the most ambivalent days on the Christian calendar, sitting between the pain and sorrow of Good Friday and the joy of Easter Sunday. Biblically speaking,the Gospels infer nothing happens on that original Holy Saturday–Jesus is in the tomb and the disciples and women were no doubt grieving through a very quiet Sabbath, hidden away from the authorities whom they no doubt thought would be at the door first thing Sunday morning (Sunday being the first century Jewish equivalent of Monday for us).

Some traditions begin the Easter vigil on Saturday, looking toward Sunday, while others simply wait quietly for the Easter dawn. The Eastern Orthodox tradition, however, takes a more active theological viewpoint–that Jesus not only is in the grave but that he also descends into Hades or hell to liberate those who have died before his pivotal “victory” at the cross–a belief taken from references like 1 Peter 3:18-20. Some versions of the Apostle’s Creed reference this belief when we say, “he descended into hell” (which is not quite the same as “he descended to the dead”).

Biblical scholars are not in agreement on what “preaching to the spirits in prison” really means and whether it is the same as the harrowing of hell. We could debate that for a long time.

Suffice it to say that, on Holy Saturday, the disciples of Jesus surely descended into their own kind of hell–one to which anyone who has lost a loved one to death can relate. The finality and wrenching silence of death strikes fear in us. The silence of Holy Saturday reminds us powerfully that death isn’t something to be circumvented or avoided. Death ends our relationships, ends our humanity, and ends our ability to “be.” Unlike the popular Platonist notions of the immortality of the soul, the Bible’s overwhelming witness is that our created-ness and humanity is tied to our embodied-ness. That’s why death is such a fearsome adversary.

At our church, we do a brief Holy Saturday vigil at sunset outside the church beside the three crosses we have set up on a hill above the parking lot. Standing around a warming fire, we use the Easter Vigil liturgy found in the United Methodist Hymnal and I offer a message that addresses the reality of death and the need for resurrection. The message stresses that we need to go through a Saturday of death, recognizing its power, before we can realize the power of a Sunday of resurrection, when Death is defeated.

Holy Saturday is a day for us to remember those who have died, recognizing the pain of death that separates us. But we do so, always, with an eye toward Sunday and the promise of life! Jesus’ resurrection is, as Paul says, the “first fruits” of our own. May we come together in Easter’s dawn hopeful and joyful that it is Sunday, and not Saturday, that holds our future.