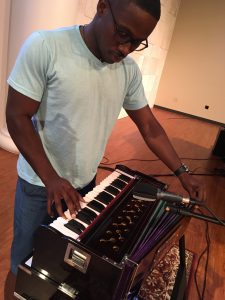 “What’s that you’re playing?” It’s a common question asked of many of my church’s music volunteers who have recently learned to play the Harmonium. The Harmonium is a keyboard instrument in the aerophone family which uses air traveling past different sized (tuned) metal reeds to create sounds; think pump organ or accordion. It became popular in the West in the 19th and 20th centuries because it was cheaper than a pipe organ and was easier to transport for missionaries heading east. In fact, many Harmoniums today are made in a case with a lid and handle—just take the top off your suitcase and there sits an organ!

Over the past century the Harmonium has seemed to find its home in India, even after a period of nationalistic resistance to Western culture. It has become a frequently used instrument in many Indian ensembles. So, why have over 15 people at my midsized church in the Midwest learned this instrument? There are many reasons, some weighted differently than others depending on the type of instrument you might choose to incorporate into your church. For the sake of illustration, I’ll continue to use the harmonium as an example. 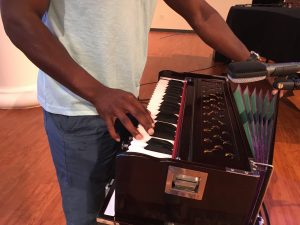 When it comes to music we use in worship, contemporary culture oftentimes prescribes the songs we should use, the type of people we should use, and the style we should use.   Expanding the types of instruments we use can be a means of freeing us. Worship is not prescribed by contemporary culture, but our culture should be prescribed by our worship. As worship leaders we are called to tell the story of God and facilitate a response to that story, involving as many people as we can from our local churches while leaning into the beautiful diversity of the global Church. When we include different instruments, we’re teaching our congregations that worship is more than a musical style and that it is a place for belonging—belonging to the story of God. Age, race, gender, and cultural—it all has value, so value it on your platform! Diversifying your instrumentation is a great place to start.