Is Anyone Thirsty? - Seedbed
close
Menu 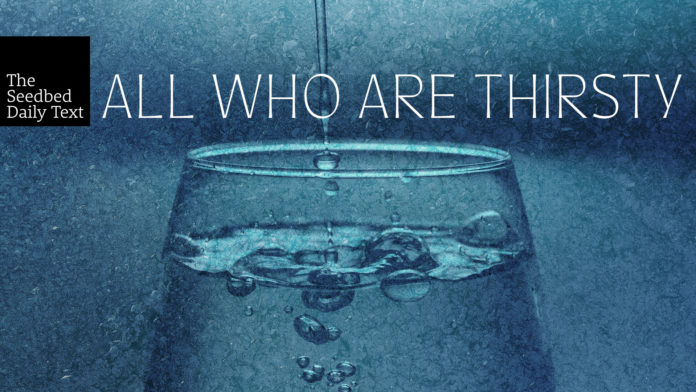 On the last and greatest day of the festival, Jesus stood and said in a loud voice, “Let anyone who is thirsty come to me and drink. Whoever believes in me, as Scripture has said, rivers of living water will flow from within them.” By this he meant the Spirit, whom those who believed in him were later to receive. Up to that time the Spirit had not been given, since Jesus had not yet been glorified.

Let’s regain our bearings. But didn’t I say yesterday and so many times before that Jesus is our bearings? Okay, yes. I mean to say, let’s remember where we are standing on this day after the day of Pentecost.

He jumped to his feet and began to walk. Then he went with them into the temple courts, walking and jumping, and praising God (Acts 3:8).

We have passed through the gate and are now in the temple courts. The courts are the areas within the temple complex surrounding the temple itself. The gate called Beautiful opened into a part of the courts called Solomon’s Colonnade or Porch. (aka King’s Porch). King Jesus did a lot of teaching here. Of course, you are seeing the supreme irony here. Jesus Messiah, the one of whom John said, “The Word became flesh and made his dwelling [more precisely—tabernacled] among us,” came to his temple. It’s like one of those stories where the CEO shows up at headquarters in disguise.

So today, we watch this beggar lame from birth. (Mind you, he is not nameless. We just don’t know his name yet). As he dances around I want us to re-member Jesus, perhaps a year earlier or even a few months ago, standing in this same place, at the Feast of Tabernacles (no less), teaching about the Holy Spirit.

The one in whom the Spirit tabernacles beyond measure shows up at the Feast of Tabernacles to teach anyone who will listen to him about the source of life, health, wellness, healing, joy, flourishing, and all the things we thirst for most. One more bit—this festival re-membered the forty years of wandering in the wilderness, when the people lived in “tabernacles” or tents. In those fasted years they learned an extravagant dependence on God—for daily bread from Heaven, healing from disease, guidance from cloud by day and fire by night, water from rocks, indeed streams in the desert. That’s the setup.

On the last and greatest day of the festival, Jesus stood and said in a loud voice, “Let anyone who is thirsty come to me and drink.”

IS ANYONE THIRSTY? (caps signifying volume)

COME TO ME AND DRINK! (bolded caps signifying volume louder)

“Whoever believes in me, as Scripture has said, rivers of living water will flow from within them.”

This is Jesus. It’s who he is. It’s what he does. And he’s showing us how it is going to work.

By this he meant the Spirit, whom those who believed in him were later to receive. Up to that time the Spirit had not been given, since Jesus had not yet been glorified.

Is anyone thirsty?
Come to me and drink.
Rivers.

My witnesses.
My church.

God our Father, who with your son Jesus Messiah, fills us with the Holy Spirit, thank you for the miracle and the mystery of the day of Pentecost. And thank you for today, and that it is only the day after. I am thirsty, Jesus. I have drunk from so many other sources. I hear those five words, “Come to me and drink.” Jesus, I come. I feel as though I have only sipped of your Spirit and experienced trickles. I want to drink deeply. I come to you. My prayer is one word: rivers. Rivers, Jesus. Rivers, Holy Spirit. Praying in Jesus’ name, amen.

What might it mean for you to move from sipping and trickles to drinking and rivers? Might it mean letting go more rather than taking on more?

P.S. Have I mentioned how excited I am about the upcoming

And Here’s an Update on Lily from her Mom, Caroline:

Our hearts were deeply encouraged and empowered by everyone’s prayers and encouragement. The fluid imbalance issue seems to be improving. We’re going to start spacing out the dialysis cycles and see how she responds. The important numbers are doing what we want them to do, which is very encouraging. Continue to pray that her body can maintain the right fluid balance.

Remember our straight line prayers: TALITHA KOUM!! UP GIRL!! UP LILY!! and to Mom, Dad and sibs, “Do not be afraid. Only believe.” For background read this.

© Seedbed 2021
Is Anyone Thirsty?
MORE STORIES