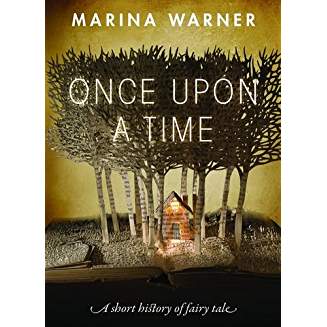 Marina Warner has written an intriguing book, Once Upon a Time: A Short History of Fairy Tale (Oxford: 2014, 201 pp.). The book plunges deep into the well of fairy tales. From various angles it explores the fascination—the strange sway—fairy tales have, not only in the English-speaking world but in many other cultures, too. The book includes sixteen apt illustrations showing the provocative power of such tales.

Warner, a student of myths and tales, is the author of Fantastic Metamorphoses, Other Worlds (2001); From the Beast to the Blonde: On Fairy Tales and their Tellers (1994); and Alone of All Her Sex: The Myth and Cult of the Virgin Mary (1976, 2013), as well as other books.

What is a fairy tale? And in fairy-tale perspective, what is the biblical gospel story, the Good News of our salvation? Where’s the difference?

Some would say there is no difference, really. You believe one fairy tale or another. Or you may view all such tales as entertaining fantasies, simply intriguing dimensions of culture, fun pastimes. Many fairy tales supposedly teach a moral lesson, but Warner points out that the moral point was often tacked on by collectors and editors. The prescribed moral lesson in fact varies from culture to culture and age to age.

Warner views fairy tales through historical, cultural, psychoanalytical, feminist, and contemporary social-media lenses—a progression that largely tracks the ways fairy tales have been viewed over the past two or three centuries (up to and beyond Freud and Jung). She points out that many popular innocent tales have a dark underside to them. What about deadly wolves or other fearsome animals, ogres, evil imps and witches, dark, threatening forests? Red Riding Hood? Hansel and Gretel? Rumpelstiltskin?

So, what is a fairy tale? That’s a “thorny hedge,” Warner warns. But she lists six key markers.

1. A fairy tale is “a short narrative, sometimes less than a single page, sometimes running to many more,” though not a full-length novel.

2. Fairy tales are “familiar stories, either verifiably old” or so often retold that they seem to reflect ancient lore. They are “customarily anonymous and undated,” often passed on by oral tradition by common folks, not elites. (Some research suggests “Rumpelstiltskin” is actually some 4,000 years old.)

3. Fairy tales usually feature “combinations and recombinations of familiar plots and characters, devices and images” that show up repeatedly.

4. Fairy tales consist of “acts of imagination, conveyed” with familiar symbols, motifs, and characters (princesses, elves, giants; keys, mirrors, rings, and so forth).

5. Fairy tales usually involve an interweaving of wonder, magic, and some kind of supernatural agency.

6. Fairy tales take place in an “imaginary place” and time. They may “evoke every kind of violence, injustice, and mischance,” but these are needful in order to arrive at a satisfying happy ending that evokes hope. In the words of Angela Carter, fairy tales express “heroic optimism.” Others call it wishful thinking.

First, we seem to need them. They touch something deep in our imaginative, creative, and mostly unconscious selves. They connect especially with children, and with the child in each of us.

Second, in many fairy tales, creatures and the created order (especially forests) are often fearsome and dangerous. Not all creatures, of course. Some are friendly, funny, benign.

There’s a kind of realism here. Wild animals and forests can be dangerous. Yet I wonder if such tales unconsciously spoil us from seeing the beauty and inspiring glory of what we generally call “nature.” From seeing “the wisdom of God in creation,” as John Wesley put it.

Which leads to number three: Are fairy tales inherently atheistic? Fairy tales often do evoke the supernatural. But not the God of the Bible. (They are fairy tales, after all!)

Many fairy tales actually trace back to pagan or animistic roots. Many tales in the Grimm collections came out of pre-Christian Germanic or Norse tribes, it seems. That is not a criticism or condemnation, but perhaps an alert to parents and other humans. (The Grimm brothers’ Children’s and Household Tales were published [in German] in various editions between 1812 and 1857).

It’s probably a good thing that we (Christians) don’t commonly interweave fairy tales with biblical stories—even though from a literary standpoint there is considerable overlap between fairy tales, fables, legends, parables, allegories, myths, and symbol-laden metaphors which seem to transcend cultures and to some degree intertwine with the Bible. (See Northrop Frye, The Great Code: The Bible and Literature, 1982.)

A few choice quotes suggest the breadth and nuance of Warner’s book:

“Stories slipped across frontiers of culture and language as freely as birds in the air as soon as they first began appearing; fairy tales migrate on soft feet, for borders are invisible to them, no matter how ferociously they are policed by cultural purists.”

“Of all the charged, active, enchanted elements in the tales, it is the words of the story that possess charmed life.” Spells, repetition, riddles, nonsense ditties. (Does this bring back memories?!)

Here I am reminded of the 2016 movie Into the Woods, with Emily Blunt, Johnny Depp, and a creepy Meryl Streep as an enticing witch. The movie combines elements from several familiar fairy tales. Just when it appears all the nice people are going to live happily ever after, everything falls apart and unwinds. No, the woods is not safe. (The movie came out after Warner’s book was published, though Warner does have a section titled “Into the Woods.”)

This in turn brings to mind Woody Allen’s clever 2004 movie, Melinda and Melinda. Is life tragedy or comedy?

Warner shows that many fairy tales do have or hint at a dark side. She notes also that in recent decades some authors and movie producers have refocused traditional tales like “Snow White” in malicious, sadistic, or even pornographic directions. Certainly no longer tales for kids.

But what of the gospel of Jesus Christ? Is it a fairy tale (as for instance Richard Dawkins would have us believe)?

For devout Jesus followers, this is a silly question. But let’s unpack it in light of Warner’s definition of fairy tale.

1. A short narrative. Check. The Jesus story can be told simply in a few pages. The New Testament Gospels are fairly short. Yet the full story of requires the whole Bible!

Yes and no on this point. Often “the old, old story” has been passed along orally, faithfully, by unfamous people. But a key point is that the good news of Jesus Christ is not “undated.” Crucially, it is rooted in history, and not just “sacred” history. Here fairy tale and the Christian gospel diverge at right angles.

3. Warner says fairy tales recombine “familiar plots and characters, devices and images.” Again, yes and no. Yes, in the sense that the gospel seems to echo standard fairytale themes (good and bad characters, wondrous happenings, perhaps supernatural elements). But again, crucially, no. The great chasm is between fantasy tales which may reflect common aspects of human experience, on the one hand, and the actual history of God’s acts in the world, especially through Jesus Christ by the Spirit. This was C. S. Lewis’ key point in his short essay, “Myth Became Fact.”

Certainly the Jesus good news welcomes and invites our imagination. (Yes! An aspect of the image of God.) And as the Bible shows, the gospel has to be “imaged” in various ways because it transcends (not contradicts) our limited rationality.

5. Fairy tales interweave wonder, magic, and supernatural agency. OK, strike magic! The whole Bible is a polemic against magic. Magic is a key marker of pagan religion (and even sometimes of Christian faith gone bad or toxic). Faith in and obedience to Jesus Christ and belief in magic, astrology, fate, or superstition are worlds apart.

Of course the gospel is full of wonder and what the world would call “supernatural” elements. But the Bible doesn’t split reality into “natural” and “supernatural.” In fact we would do well to avoid the terms “supernatural” or even “miracle.” Gospel signs and wonders are acts of God in our lives and our world, which is God’s world.

6. Fairy tales inhabit an imaginary place and time. Yes, but not the good news of Jesus Christ, even though it transcends spacetime as we know it. Christians who know Jesus say things like: Don’t “give heed to fables” (1 Tim 1:4 KJV) or myths. The reality of Jesus Christ, John says, is something we have seen with our own eyes; handled with our own hands (1 Jn 1:1). “We have not followed cunningly devised fables, when we made known unto you the power and coming of our Lord Jesus Christ, but were eyewitnesses of his majesty” (2 Pt 1:16 KJV).

In an age when the very concept of truth is questioned and by some considered untruthful, it is useful to nail down the categorical difference between fairy tale and the good news of Jesus Christ.

This blog only scratches the surface of the depth and nuances of Warner’s “short” history of fairy tales. She touches upon C. S. Lewis, Tolkien, Hans Christian Andersen, Charles Dickens, George MacDonald (and “his friend” Lewis Carroll), Shakespeare, Franz Kafka, Walt Disney, and many others. (And of course Lewis, Tolkien, and MacDonald have written profoundly on questions of stories, tales, and fantasies.) But Warner avoids—perhaps unconsciously—any discussion of religion or the Christian faith.

I was particularly struck by the last words in Warner’s book: “We are walking through the dark forest, trying to spot the breadcrumbs and follow the path. But the birds have eaten them, and we are on our own. Now is the time when we all must become trackers and readers of signs. Fairy tales give us something to go on. It’s not much, but it’ll have to do. It is something to start with.”

Wow. Contrast that with the gospel, the message of Jesus! Clearly C. S. Lewis was on to something when he said the good news of Jesus and God’s reign is “myth become fact.”

The gospel does not reject fairy tales, really. But it gives us a broader frame within which to see, understand, and enjoy them. For the gospel is not fairy tale. It is actual truth, especially through the Word become flesh.