Every year Jesus’ parents went to Jerusalem for the Festival of the Passover. When he was twelve years old, they went up to the festival, according to the custom. After the festival was over, while his parents were returning home, the boy Jesus stayed behind in Jerusalem, but they were unaware of it. Thinking he was in their company, they traveled on for a day. Then they began looking for him among their relatives and friends. When they did not find him, they went back to Jerusalem to look for him. After three days they found him in the temple courts, sitting among the teachers, listening to them and asking them questions. Everyone who heard him was amazed at his understanding and his answers. When his parents saw him, they were astonished. His mother said to him, “Son, why have you treated us like this? Your father and I have been anxiously searching for you.”

“Why were you searching for me?” he asked. “Didn’t you know I had to be in my Father’s house?” But they did not understand what he was saying to them.

Then he went down to Nazareth with them and was obedient to them. But his mother treasured all these things in her heart. And Jesus grew in wisdom and stature, and in favor with God and man.

How’s everyone’s Lent going so far? About this time in Lent is where a lot of people tend to falter. It is not necessarily about weakness or lack of devotion – sometimes, we just get so sidetracked with life that we slip back into our old habits before we realize it. And before we know it, we have hit snooze instead of getting up for that extra half-hour of prayer in the morning; we have let the gossip runaway with us and said things we shouldn’t have; we get angry in traffic and curse; we order a soft drink at dinner without even realizing it.

That is why this passage is so comforting. The first time many people encounter this passage is in Sunday School at a young age, and it is usually couched in obedience to one’s parents, because even Jesus had a Mom and Dad. For a kid, it is a pretty insightful lesson during that time of one’s life. However, as people age out of Sunday School, that lesson seems to stay behind, as if it is something only children can learn from.

But think about this story for just a minute. Here is Almighty God, the Creator of the universe, living on the earth as a child who has to do what his parents say. Forget about the Sunday School lesson on obeying your parents – can you think of anything more tedious and mundane for the Savior of the world to have to endure during his sojourn on the earth than to grow up in the back country of some province in ancient Rome? What, did he have to have to deal with earning an income and juggling interpersonal relationships, too?

It’s almost as if part of the point of “God With Us” is that God literally endured everything we have to endure.

During Lent, much is made of the suffering of Christ as punishment for our sins. We remember that in Christ, God subjected himself to mockery, torture, and execution, on our behalf. We devote ourselves to different means of penance and devotion to grow closer to God, but how often do we stop and reflect at how close God drew to us?

We often treat the stories of Scripture like a good TV show – we see the characters doing the funny things or the interesting things. We rarely see the Action Hero in the movie pumping gas before the big chase, or the feisty, quick-witted All-American Mom paying the bills when the kids are in bed. That stuff is boring. It reminds us of our lives and that’s what we come to the movies to escape from.

But God didn’t skip that part of our experience. In this passage, we see that in the person of Jesus, God even subjected Himself to the mundane, the boring, and the frustrating. He had to obey the rules, he had to answer for his actions, he had to navigate the world minute-by-minute, day-by-day, year-by-year, just like you and I do.

As we enter the final stretch of Lent, it is often the monotony of our daily grinds that distract us and make it harder to stay devoted to Jesus. In some ways, what makes Christ’s suffering harder to get our heads around is that we know the slim likelihood of having to endure what he endured for us; we’re just trying to make it to Friday, to payday, to vacation, to whatever. Take heart, friends. Christ has been there, too. 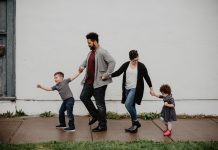