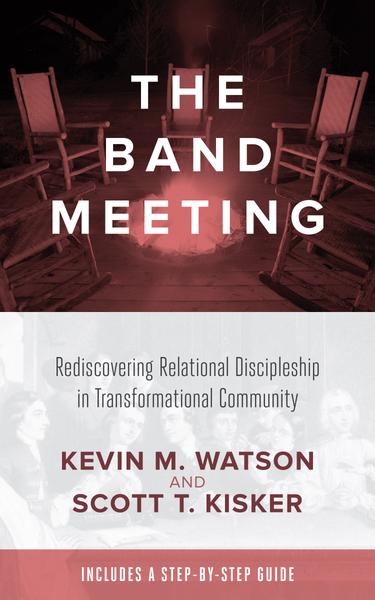 The Band Meeting by Kevin Watson and Scott Kisker is a small book, just 172 pages (Seedbed Publishing). I consider it the most significant book of 2017.

The book’s subtitle: Rediscovering Relational Discipleship in Transformational Community. Despite the big words, the message is simple. Want radical Jesus-centered disciples today? Do what John Wesley did some 280 years ago in England. Form bands of earnest Jesus-followers who obey God’s word in James 5:16—“Confess your sins to one another, and pray for one another, so that you may be healed.”

In 1980 I published The Radical Wesley and Patterns for Church Renewal. It was getting a bit out of date, so I published a “new improved” version: The Radical Wesley: The Patterns and Practices of a Movement Maker (Seedbed, 2014). The book highlights the importance of the early Methodist class meeting. After reading Watson and Kisker’s book, however, I see that till now I failed to understand the strategic role of bands in the ecology of Methodism.

Watson and Kisker rightly call the band meeting “the engine of holiness”—Wesley’s “core strategy” for turning believers into disciples who lived what Wesley called “all inward and outward holiness.”

The significance of this new book is that it builds a believable bridge between early Methodist bands and today. Contemporary Christians, even Methodists, often dismiss bands as unworkable these days, a historical anachronism. Who today will submit to such intrusive questions! I mean the five questions asked of band members at every meeting:

What known sins have you committed since our last meeting?

What temptations have you met with?

How were you delivered?

What have you thought, said, or done, of which you doubt whether it be sin or not?

Have you nothing you desire to keep secret?

Watson and Kisker argue that these are the very questions that should be asked and answered today—that for many Christians, this is precisely the shared accountability that most Christians lack. Not only that: Here is the key to the spiritual growth that many Christians long for. Bands can be the antidote to Christians struggling lonely and alone, trying to be real Christians, often failing. Or alternatively, professed believers living cheap grace that fails Jesus’ test: Obedience.

Will Christians today really submit to such accountability, such banding? The Band Meeting argues: Yes indeed. Watson and Kisker offer a wealth of personal testimonies from today, not centuries ago. Men and women, pastors and people in various walks of life, for whom bands have become the threshold into happy holy living. Walking in God’s ways, as the Bible teaches. The authors begin with their own testimonies (which they shared publicly at the New Room Conference last September in Franklin, Tennessee).

Few books combine so well the elements of historical explanation, theological analysis, and practical discipleship challenge. The nearest thing in my experience would be Wesley’s own journals and sermons. The point of almost all Wesley wrote and did was to help people experience the revolutionary love of God and show it in daily living.

The Band Meeting has a lot of scholarship behind it. Kevin Watson did his doctoral dissertation on the topic, later published as Pursuing Social Holiness: The Band Meeting in Wesley’s Thought and Popular Methodism Practice (Oxford University Press, 2014). He also published a small book on the class meeting, titled The Class Meeting: Reclaiming a Forgotten (and Essential) Small Group Experience (Seedbed, 2014). Scott Kisker has published Longing for Spring: A New Vision for Wesleyan Community, with Elaine Heath (2010), among other books.

Although this new book focuses on bands, it covers a broad sweep theologically. It thus offers a good basic introduction to Wesleyan theology. Chapters two through four deal primarily with theology and history. The remaining four chapters explain the function of early Methodist bands and how to start a band and keep it thriving.

Watson and Kisker stress the Trinitarian dimension of the community (koinonia) experienced in bands. They ask why “the church so often settles for triviality rather than the deep kind of knowing, acceptance, and mutual love that is found in the life of the Holy Trinity?” (6).

For Wesley, bands were key to experiencing social holiness. Class meetings were mandatory for all early Methodists, but bands were the place for deep spiritual change and discipleship. To really practice inward and outward holiness required taking James 5:16 seriously, literally. Few churches today can be healthy without such confession and healing, I believe.

Bands are countercultural. This is why they are needed. Bands were just as weird (to many people) in Wesley’s day. But they worked, for they catalyzed believers into disciples. Bands provided the environment for the kind of spiritual growth-to-maturity that makes a difference not only in the church but also in the world.

One can hardly read this book honestly without being touched in both heart and mind. It convinced me to join with other brothers and form a weekly band on the original Wesleyan pattern.

A year ago I wrote that The Patient Ferment of the Early Church: The Improbable Rise of Christianity in the Roman Empire by the late Alan Kreider was the most important book of 2016. The Band Meeting is quite different. But both books offer timely lessons from history: How Christians in earlier times learned to put into practice the things Jesus commanded (Mt 28:20).

Wesley was a firm believer in God’s providence. I believe that in the providence of God, The Band Meeting comes as a potential wake-up call to the church.