The Difference between Supermodels and Saints - Seedbed
close
Menu 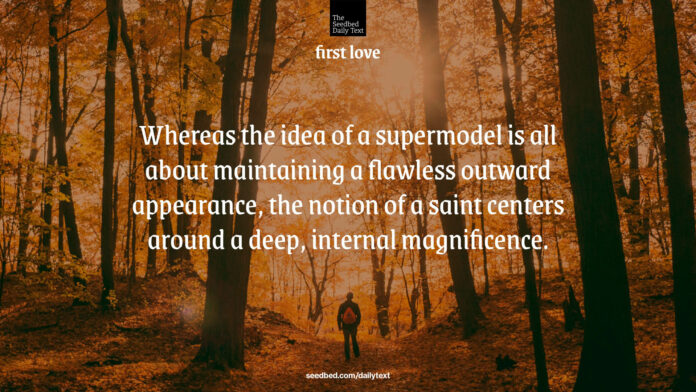 Join together in following my example, brothers and sisters, and just as you have us as a model, keep your eyes on those who live as we do. For, as I have often told you before and now tell you again even with tears, many live as enemies of the cross of Christ. Their destiny is destruction, their god is their stomach,and their glory is in their shame. Their mind is set on earthly things.

Have you ever thought of the apostle Paul as a supermodel? I haven’t either, until now. We typically think of a supermodel as tall, rail-thin, beautiful women wearing clothing made by leading fashion designers whose picture is on every fashion magazine in the world at the same time. They tend to create highly unrealistic examples for our daughters to pattern their own appearances and self-image after.

Okay, so maybe Paul wasn’t actually a supermodel after all, but he did say to follow his example. That’s what models do. They give us something to pattern after. The New Testament has a different kind of word for supermodel. The word is hagios in Greek. It means “holy one” or “saint.”

Whereas the idea of a supermodel is all about maintaining a flawless outward appearance, the notion of a saint centers around a deep internal magnificence. It manifests not through appearance but by the quality of radiance in one’s character and the depth of love in one’s relationships. When Paul calls on us to live as examples of Christ, he is talking about a way of life that points not to us, but a life through which Jesus Christ reveals himself. Paul is not talking about being religious but becoming holy.

I like the way Albert Day speaks of holiness: “True holiness is a witness  that cannot be ignored. Real sainthood is a phenomenon to which even the worldling pays tribute. The power of a life, where Christ is exalted, would arrest and subdue those who are bored to tears by our thin version of Christianity and wholly uninterested in mere churchmanship.”

We need more saints on earth, not just in heaven. We need more ordinary saints, not just the exceptional, unreachable exemplars. Why? Because there are too many counterexamples. Hear Paul’s deep grief on this point.

For, as I have often told you before and now tell you again even with tears, many live as enemies of the cross of Christ. Their destiny is destruction, their god is their stomach, and their glory is in their shame. Their mind is set on earthly things.

He is not talking about pagans here but some so-called followers of Jesus. They are compromised Christians. He is likely referencing leaders who claimed the name of Christ but defied the mind of Christ and the lifestyle of a Christian. The word indulgent comes to mind.

Then and now, Christian leaders, often well-intentioned, will compromise with the agendas of the culture and the interests of the world in the interest of preserving relationship or unity and in the name of Christian love. Such leaders become unwitting enemies of the cross of Christ. Indeed, love covers a multitude of sins (1 Peter 4:8), yet it never indulges sin. The moment love compromises with sin it ceases to be love and begins its journey toward becoming license.

It’s why we speak a lot in our work of holy love, which demonstrates extraordinary compassion for sinners while refusing to compromise with sin. Love cannot indulge sin because compromising with sin means complicitness in the strategy of sin, which is to destroy people. Love is incompatible with sin, not because love is good and sin is bad, but because love heals and sin destroys.

If I’m honest, what inclines me to make public compromises with sinners are my own private compromises with sin. This is why I must become more mature in my understanding and life of love. Sin is so seductive and its strategies can seem so reasonable. In fact, sin is so deceptive as to make standing against it not only humanly unreasonable but culturally untenable, not only unloving but insensitive.

Let’s help each other become mature, coming to fullness in Christ and even perfection in love. Holiness is the deep internal magnificence we long for.

Abba Father, we thank you for your Son, Jesus, who by the cross has atoned for our sin and robbed sin of its power over us. Forgive us for our compromises with sin and even more for the way our indulgence leads us to places where we will regard sin as not sin. Thank you that the gospel will not reason with sin. Awaken us to an arresting holiness that overpowers sin and reveals the beautiful holy love of Jesus. We pray in Jesus’ name, amen.