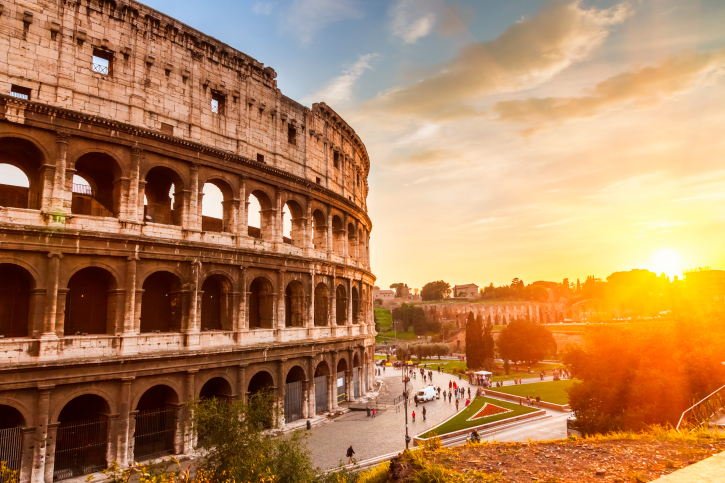 For example, who are the weak and the strong of Rom 12–15? How one understands the identify of the church at Rome bears directly on the identification of the weak and the strong. Of course the perennial question of whether the Roman churches are predominately Jewish or Gentile has dramatically affected the interpretation of the letter – one only needs to compare commentaries to see the spectrum of interpretation.

As it regards the makeup of the community, it is the Jewish roots that are a bit easier to discuss and so we begin here. One of the first references between Judaism and Rome occurs around 161 BCE when Judas Maccabeas sends an envoy to Rome to seek an alliance (1 Macc 8).  One of the earliest references to Jews living in Rome comes from Valerius Maximus, the Roman historian and rhetorician, who in approx 139 BCE, commented that the praetor expelled the Jews from Rome for proselytizing.

This community, large enough to be singled out by a Praetor, was added to in large numbers by the conquests of Pompey who brought numerous slaves back to Rome around 63 BCE. Here many Jews came to Rome as slaves and some were led in the Roman triumph that Pompey held in his honor.  Many of these Jews became Roman citizens on their emancipation. This of course provides one explanation on how Paul might have received his Roman citizenship, perhaps Paul’s grandfather was one of the slaves taken to Rome.

Further evidence of Jewish-Roman interaction is reported by Josephus who notes that between 44-49 CE, Julius Caesar extended several rights to the Jewish people for their support during the battle between him and Marc Antony.  According to Josephus, Caesar granted them the right to free assembly, and right to retain their national customs, such as sending money to the temple in Jerusalem, kosher markets, and to the chagrin of other Romans, exemption from working on the Sabbath.  Augustus, the next emperor, would uphold these rights as well.  Augustus even accommodating and offering an alternative doling out of the grain on a day when it conflicted with the Sabbath.

Not all were gracious to the Jews in Rome, the Roman senate appears to have been antagonistic towards the Jews and antisemitism was a known feature of the ancient world with the Jews being looked down upon for circumcision which was viewed as mutilation, and Sabbath observance being viewed as laziness.  Most important was that the Jews were exempt from serving in the army and from offering sacrifices to the imperial cults.  According to Philo many of the Jews of Rome lived in the poorer sections of the city on the west side of the Tiber in the district known as the Travestere.  Philo also notes that a delegate of about 6,000 Jews protested and went up to Rome to protest anti-Jewish riots.

Two dates are important for the book of Romans.  The two dates are tied to the mandate and edict of Claudius.  The ruling Roman elite were always suspicious of the collegia (association) which were viewed as places of civil unrest. Jewish communities were regarded as collegia and often invited suspicion.  This suspicion came to its first climax in the mandate of Claudius, when in 41 CE he ordered that the although the Jews could hold to their traditional mode of life, they could no longer hold meetings. The second important date occurs in 49 CE with the edict of Claudius. According to Suetonius, Claudius expelled Jews from Rome for disturbances related to a figure named chrestus.

There is considerable debate around numerous features of the incident described by Claudius. The debate centers on whether literally ALL Jews were expelled from Rome (some 15,000-60,000 people) or whether just the leaders or those who were viewed as agitators.  Acts 18:2 relates this incident as well, where Paul meets Priscilla and Aquilla in Corinth, who Luke notes were banned from Rome. They are of course later greeted in Rom 16 as residents apparently having moved back to Rome in the intervening time.  At one time, scholars equated both the mandate and the edict of Claudius as the same event, many today hold that the two issues were separate incidents.  The initial mandate probably hoped to squelch any uprising, and then the issuing of the edict when the mandate failed.

An important discovery was that of the ancient catacombs (burial places) found in Rome. The catacombs are affixed with inscriptions that reveal several interesting features about the Jewish community in Rome. Among the six catacombs found, the inscriptions indicate as many as 11-13 synagogues (assemblies, not buildings) in Rome during the first century.  In 2003, these along with more recent finds were carbon dated to the first century.  Notable among the inscriptions is that it appears that the Jewish community in Rome had no central organization supervising the individual synagogues. Unlike Jewish communities in Alexandria and other locales, there was no local ethnarch (political leader) for the individual synagogues to report to.

Some have argued that these groups maintained a stronger link with the Jerusalem church which provides several illuminating features to the book of Romans.  Indeed the church tradition mentioned by Ambrosiaster, notes that the first community in Rome was of a more loyal Jewish / pro-law movement. The inscriptions also reveal the interesting feature of the local language.  Most of the inscriptions are written in Greek, with less than 7% written in Hebrew.  Wolfgang Wiefel has argued that this lack of central organization allowed the Christian missionaries to infiltrate the communities more easily.

Turning to Christianity in Rome, before 40 CE, much of the community is veiled in obscurity. When Christianity first took root in Rome is not entirely known. Church tradition of course held that Peter took Christianity to Rome despite several aspects pointing in the opposite direction.  First, Luke makes no mention of Peter in Rome and he only notes “visitors” from Rome, both Jews and proselytes were in Jerusalem on the day of Pentecost. In Rom 16:7, a reference appears to Andronicus and Junia possibly implying that they played a part in the founding of the church.  According to Paul’s own testimony in Romans, it appears that the church did not have an apostolic foundation – hence his own ministry there. Later church tradition, through Ambrosiaster notes that it was from Jewish believers already living in Rome and Clement makes no mention of Peter.

The Origins of the Christian Community in Rome

It is typical to begin with the origin of the Christian community around 49 CE with the edict of Claudius, where it is often noted that with the removal of Jewish leadership, the Gentile side of the church grew much larger and took over the roles of leadership.  Peter Lampe in his excellent work, From Paul To Valentinus, has drawn attention to the Puetoli–Rome trade route and suggests that this was the main way that Christianity would have entered Rome from the east. Archaeological evidence shows that the early Christians also lived in the poorer sections of Rome, west of the Tiber river in the Travestere district.  However, some evidence has also found in the Aventine district which was the more well-to-do area of Rome east of the Tiber river.

One historical factor must be brought into consideration, it appears at the time of Paul’s writing of Romans in the mid-50’s the Roman community was quite small, even with the return of the Jews.  However by the time of Nero’s fires in 64 CE, the group was large enough to be identified by Nero as a group to be scapegoated and bear the brunt of this crime. Thus between Paul’s letter and the burning of Rome, a period of approximately less than 10 years, the Roman Christian community had grown rather large.

It is important to bear in mind that the beginnings of Christianity although veiled in obscurity probably began with Jewish roots as Ambrosiaster noted. If Acts is accepted as providing the paradigm for early ministry among the Jesus followers, then that ministry began in the synagogues and moved out to the agoras.  Paul himself likewise not only states this theologically in Romans 1, with the gospel to the Jew first, but also to the Greek, but also probably reflects his praxis among the cities. If this can be extrapolated out to other Christian missionaries then the same case probably proves true for Romans. The first roots in Rome were most likely Jewish-Christian roots and then only later did a predominantly Gentile group arise within the church.

View all of our Bible study resources on the book of Romans.