What Pastors Can Learn from Night Janitors - Seedbed
close
Menu 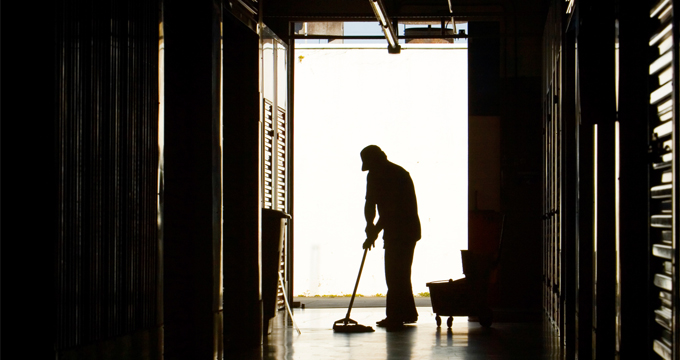 When I was just 19, I needed a job to continue my studies at the university. I stopped by the church right next to campus, which I could easily walk to, and asked if they had any work. They needed a night janitor. I learned to sweep and mop floors, dust all the beautiful light colored wood in the building, set up chairs, and yes, even clean urinals and toilets. Late at night, when the building was entirely dark, I would begin my menial tasks.

It wasn’t long before I was bored in the repetitive and lonely job. I found a stash of old cassette tapes, and dug an old Walkman and puffy foam earphones out of my desk drawer back in my room. The cassettes were sermons that were recorded ten years earlier or more. Some of them had even stretched over time so that the preacher had an odd higher voice. But this was before iPods, so I listened to pass the time. I heard great sermons on the Feeding of the 5,000, the Rich Young Ruler and the Man Born Blind. I learned about obscure Old Testament prophets and learned even more about famous Bible people like Moses. Daniel and Paul. After I had listened to all the tapes, I re-listened to my favorite ones. I found an old set of the Bible recorded in the King James Version, which they didn’t even use in my lifetime in the church any more. It sounded odd and foreign to me—like listening to an obscure play by Shakespeare. I liked how the Psalms sounded in particular in that odd old tongue, and listened to those over and over again.

Sometimes when I would be working in that church in the middle of the night with all but a few of the lights off, I would notice something moving in the distance. It made my heart jump. Is someone here? Did they break in? Did I leave a door unlocked? The church was bright and cheerful on Sunday morning, but at 1:30 in the morning with the lights off, a church can seem downright haunted. At times when this would happen, I would investigate and find the Youth Pastor had just returned from a mission trip with the teens. He was disheveled and practically homeless looking, smelling of pizza and Mountain Dew. One time it was the Senior Pastor who couldn’t sleep, so he came in to work on his unfinished sermon. He was a bald man with rosy cheeks. I nearly gave him a heart attack when I came around the corner, then he paused to have a kind conversation and even prayed with me for a moment.

Usually I found no one after these scares. I wondered if I had been imagining things, or if there were intruders hiding in the closets as I worked. And then I started to think it might be the presence of something more supernatural. I started to take it as a sign that God was with me—that his transforming presence was right around the corner, watching me mop floors and clean toilets. I think of it now and consider the way I thought about it as perhaps a bit shallow, maybe even superstitious. Yet, maybe I was on to something.

Occasionally after a phantom sighting like this, I would go into the sanctuary, which was black with only the streaks of moonlight shining down from the large windows on the left side of the spacious room. I would go down to the cross at the front sometimes, and I would kneel and pray in my janitor clothes and remember a time when I was just six years old.

At that very church, when I was just six years old, I had gone down to that altar and knelt before that cross. This church had a strange layout, and the huge cross was out in front of the stage, right by the altar. That cross was sort of “in the way” of everything, which was both awkward and wonderful at the same time. I knelt there and prayed to receive Christ in that spot–on the very carpet that was now old and fading–the same steps I was going to vacuum that night.

I went on to become a minister later, and left the janitorial duties to others. I even came back one day to be one of the pastors at the very same church I used to clean toilets in, and I remember when we tore down that old building and built a beautiful new one with dark wood and stained glass windows. I still have a brick from that old church on my shelf. Later on, I got to hire a night janitor there and remembered all this. Of course, working in the church in a variety of ways since then is not all that different than being a night janitor. At times it is boring and repetitive. Sometimes, it is even lonely. It always involves cleaning up after other people, and getting things ready for worship the next day. Most of all, it involves looking for the transforming presence of God even in the dark and lonely places. Especially in the dark and lonely places. He is present, even now, if we would but look for him and kneel at the foot of the cross that always stands peculiarly in the way.