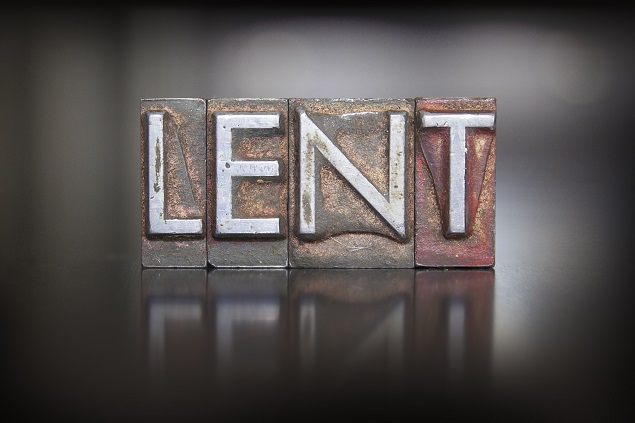 We asked our contributors to share some of their ideas and resources for planning worship in the Lenten season. In this first post, we share some possibilities for marking Lent visually in worship. 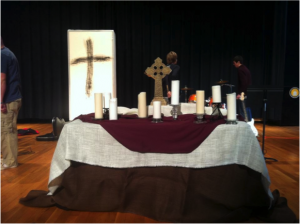 For each of our sermon series, we create or purchase a graphic to use on the screens during our worship services. The graphics are also used in our bulletins and on social media and our website. This year for Lent, our non-traditional service is taking a more traditional approach. We worship in an auditorium with no windows, but will use a graphic on our screens to represent stained glass windows. We hope this will be a modern twist on a traditional worship setting. We’re purchasing this collection of motions and still graphics, and then adding our series and sermon titles to them. https://shiftworship.com/collections/stained-glass-collection/

We have a blank stage each week during worship. Generally we change our set design with each series. This year for Lent we will use an altar table, with linens in purple and gray. The table will be set with our communion elements, a cross, and a candle. The pictures below are some of our past Lenten stages. The ash cross was painted on canvas and stretched over a light box, built by a church member. The painting of Jesus were done on separate pieces of canvas and pieced together over the course of the Lenten series. 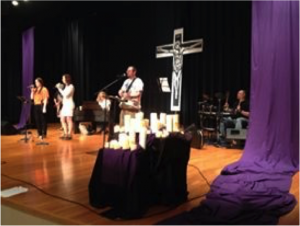 Resources I would like to use in the future for Lenten artwork are the coloring posters offered by Illustrated Children’s Ministry. My family purchased the family Advent devotions from Illustrated Children’s Ministry to do in our home. They included a reading, questions, prayer, and coloring sheets to complete each week of Advent. I’d love to purchase a similar Lent devotion for our family and hope to one day purchase the posters for our church. I believe that people of all ages can benefit from sitting around a box of crayons and praying over images and words or engaging in conversations with others sharing the crayons. https://store.illustratedchildrensministry.com/collections/lent

I am excited about using the Illustrated Children’s Ministry resources this year. It’s not just for kids! They have large coloring posters for Stations of the Cross that can get the whole church involved in coloring. They also have lectionary-based worship bulletins and curriculum, all illustrated beautifully and whimsically.

I also love the work of Jan Richardson. She has beautiful abstract pieces that elicit contemplation and meditation, as well as starkly beautiful charcoal drawings of the Seven Last Words of Christ, suitable for Good Friday use. 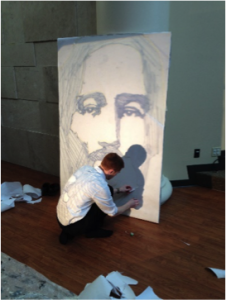 Often our scripture readings for the Sunday’s in lent are a progression through the narrative. Because of this, and to emphasize this journey, we’ve created a literal map in the sanctuary (with gaff tape—the little dashes with X’s or symbols to symbolize the stop of each week). So, through the season, the scripture reader will journey throughout the sanctuary, leading Easter Sunday to be on the platform.

Six or seven years ago we had someone do a life-size painting of Christ that was then mounted on the cross and folks were then invited to come and touch it. The sermon spoke to our uncomfortableness with Christ being on the cross—sometimes we’re too eager to get him off the cross because we don’t know what to do with the image of a suffering God, but this does a disservice to the true nature of God. We can come to God with all the hurt, pain and shame. By touching the painting the people were physically connecting their pain with Christ’s, knowing that indeed he bore their sin. He knows them and cares for them. There was a great response and people still today refer to that response element.

One year a local Greenhouse has let us use dead grasses which progressively come back to life over the season. This is in contrast to the barren platform that we usual start with for this season. 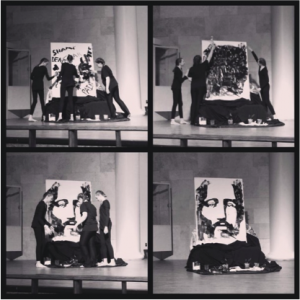 We’ve also utilized an art element in the season of Lent that took a bit of prep, but was a beautiful performance art piece (see attached pictures). To prep, I painted a piece of plywood white and then covered it with large white paper, then using an old school projector, I traced an image of a vague “face of Jesus” on the paper that was covering the plywood. Once accomplished, I used an x-acto knife to cut out the pieces shaded in on Jesus, leaving the portions of white still on the plywood (those pieces often stayed in place because the knife cut into the paint behind and acted kind of like a sealer; but some pieces I went ahead and used masking tape to ensure they stayed in place). Then I either would leave it, or sometimes I’d cover the whole thing (not pieces of paper and plywood) with white, or gray (if I wanted a 3 tone final piece).

For the performance part, a person or a group of people (we used a group of our youth, pictured in the attachment) would paint words of pain, suffering, sin and grief.  The words started more simply, but then as the piece progressed they’d become more sloppy and chaotic until the words were illegible, and the artists were basically slapping paint everywhere, covering the whole piece. Then, they would use their nails or a paint scraper, and find the pieces of paper that had been taped over, and they would pull the pieces off. They acted as a stencil so that once all the pieces were removed, Jesus’s face was revealed. It symbolized that “He himself bore our sins”.

A few years ago my church (Offerings Community of First UMC, Lexington, KY) decided to start hanging icons during our services. We began in Lent with images of Christ – Rublev’s “Jesus Christ Pantocrator,” an Orthodox “Jesus Christ Pantocrator,” as well as icons that depicted the Last Supper and Jesus’ crucifixion. The icons surrounded us with Christ’s image in a powerful way, but also helped promote a sense that the congregation was experiencing the story of God in the worship space itself. As we moved into the seasons of Easter and Pentecost, we kept adding new icons to the space that coincided with the season of the Church calendar. However, we didn’t take down the old icons, we just kept adding to them within the space. By the time the next Lent rolled around, the entire biblical narrative was displayed on the walls of our worship space. I continually had church members and guests tell me that something about the icons drew them into worship in a new way. There was something both beautiful and mysterious about the icons. In the Orthodox tradition, icons are seen as a window to heaven. I truly believe they can still function so in Protestant churches today, providing us a tangible way to see the divine.

In the past, my congregation at Atlanta Christian Church has done a modified version of Stations of the Cross. Our congregation is generally not too heavy on liturgy, so doing something like this was an interesting shift and was well-received. It provided a setting for more deliberate reflection of the final hours of Jesus’ life and the implications of the events of Holy Week. Each station had a Scripture and prayer guide, and artwork was set at each station.

Regrettably, we didn’t take pictures of this service, but it was meaningful in our congregation for one particular reason. Atlanta Christian Church is a congregation that is best described as transient. In the nearly five years since I have been attending, the size and shape of the congregation has been in a constant state of transition. It is made up of people from every theological background imaginable, who come and go for school, jobs, family adjustments–and our congregation is small enough that the changes are easy to see. By doing a service rooted in a tradition that goes back centuries, it created a sense of connection to our brothers and sisters in the faith across the world and across history. It reminded us that even though our congregation is in a constant state of flux, we belong to something bigger and more permanent than we are.

The Stations of the Cross are indeed a great way to reflect on the suffering of Christ and its significance in our salvation, but that is not their only purpose. In churches where the demographics change on the regular, practices like this keep us connected to our common heritage with congregations far away and long ago. In congregations that are not as heavy on liturgy, occasional observance of tradition keep things grounded, and remind us of the foundations on which our faith is built.