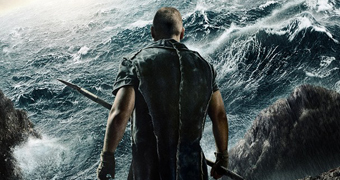 I confess . . . I’m excited about the new movie Noah. I’m excited that someone with the star-power of Russell Crowe has taken up the challenge of playing one of the most opaque, enigmatic characters in all of scripture. I’m also excited that a major studio and production team committed a huge budget to do this film. The last time I was this excited about the Noah story was in the 1970’s when I about laughed myself to death listening to Bill Cosby re-live the story from Noah’s point of view.

I also should tell you that in general, with movies based on books I’ve already read, or things I know about, I’m prone to forgive. A movie, especially a movie based on a biblical account, is not a commentary, not exegesis, not a sermon, not even a translation or paraphrase. I don’t expect it to be. The biblical authors were famously laconic, sparing in their details, leaving huge open spaces in their narratives, which readers have loved filling in with their own imaginations. The Bible doesn’t deluge us with details, but seduces us with spaces. Jewish interpretation is a great example. A long tradition of Jewish interpretation, called midrash, includes the imaginative re-telling of biblical stories, with different aspects thrown into the mix. For example, the story of the binding of Isaac in Genesis 22 is told and re-told with different scenarios in play as to what Abraham might have known, what he would have done had God not stopped him, how the story might have ended differently. The midrashists fill in the gaps, fill out the storylines, and provoke us to imagine alternative stories, all ultimately coming back to the biblical story.

The Bible doesn’t deluge us with details, but seduces us with spaces. Tweet this!

Still, folks with a high regard for the Bible will come to this movie and want to grade it for accuracy, and that’s okay too. Since I haven’t seen it, and have only seen the trailers… okay… seen the trailers about 30 times… and I’ve seen some bits from the graphic novel based on the script, I thought I’d share some little-known, or sometimes forgotten, facts about the biblical flood story.

The best known is the 11th tablet of the Epic of Gilgamesh, which comes from an earlier Akkadian text known as Atrahasis, which in turn, was preceded by a Sumerian story whose hero was named Ziusudra. These stories show some close connections with the biblical story, close enough to make scholars wonder whether the Bible and the ancient accounts depend on one another. That’s unlikely, but certainly, the biblical account drew from a fund of themes, motifs, images and genre-rules that were common in the ancient world.The cause of the flood in the Bible is the extreme wickedness of humanity, seen “intensively” in the line “every imagination of their hearts was only evil continually” and “extensively,” characterized by the Hebrew word חָמָס ḥāmās “violence.” It looks like the world of Russell Crowe’s Noah has the wicked heart and violent behavior theme perfectly! Interestingly, in ancient Mesopotamia, the main cause of flood seems to have been over-population, which produced a level of racket that disturbed the gods.

Fact #2: Despite what Genesis 6:1-4 seems to say on the surface, there likely weren’t any children born half-angel and half-human walking around before the flood.

Seizing on the apparent connection between the term nephilim and the Hebrew verb meaning “to fall,” some immediately make a tie to “the fall” and think of these “fallen ones” as fallen angels. The graphic novel based on the Noah script shows these creatures as wingless giants with 6 arms! The reality was less dramatic. Several scholars have pointed out that certain lines of kings in the ancient world claimed descent from gods, and our text is probably talking about a period of extreme violence perpetrated by ruthless warlords claiming divine prerogatives.

Indeed, when the Pharaoh’s of Egypt spoke of violently rebellious warlords in Canaan, they often called them “wretched fallen ones.” On the other hand, that link to the verb meaning “to fall” might be weak as well. Another cognate language features the same word meaning “To destroy, to tear down” and so our Nephilim might well be “Destoyers” or the like. Since extreme violence figures into the reason for the flood in the Bible, Genesis 6:1-4, by providing a kind of genealogy for the abuse of power, provides a great prologue to the story.

Fact #3: The flood was not just rain.

I recall the comedy routine done by Bill Cosby in the 1970’s dealing with Noah, when God threatened to make it rain for a thousand days. Noah said “No, just let it rain for 40 days and let the sewers back up!” But the fact is, the flood in Genesis is far more than a big rain. In Genesis 1, God created the world in a most peculiar fashion. The universe took the form of a vast, dark body of water. In Genesis 1:6-8 God causes a vast “expanse” to open up in this water. The image is that of a bubble forming in the midst of the water.

This expanse, or bubble, separates the “waters above” from the “waters below” and essentially becomes a biosphere, a fragile but protected place for life to happen. In Genesis, we are told that the windows of heaven open, and the fountains of the great deep are broken up. On the latter, the movie depicts water bursting out of the ground! What’s happening in Genesis is not just rain, but the piercing of the biosphere, the bursting of the bubble, with the waters above and below flowing back together and, in effect, “uncreating” the world.

Fact #4: We know nothing of Noah’s emotions or experiences of God.

Noah is not depicted as preaching repentance to the world in Genesis (in the New Testament, yes). So how did Noah come to grasp the coming threat? The Bible simply says God told him. The Bible is typically very reserved about the details of these kinds of experiences, since God can speak in so many ways. So the movie stresses repeated visions of a flood that Noah needs time to understand.

This is a good place to comment on a controversy surrounding the movie, namely the use of “Creator” in place of “God” or “the Lord.” This substitution is seen as sinister in many places. One news commentator even commented how many times “God” and “the Lord” are named in the biblical account of the flood. But wait—during the actual narrative of the flood itself, Noah never speaks! Later, cursing his son Ham, he does name God, but in the story itself, Noah is silent. So maybe we have an opening for the movie-maker’s imagination here. But more to the point, substitutions for divine names are already present in the Bible and in later Judaism. The divine name “Yahweh” was not to be pronounced, and so a word meaning “My Lord” was always read in its place.

Now, “Lord” means something very different from a relational, personal name (“Yahweh”), so the substitution is not trivial! But even the word “God” in Hebrew is a substitute! The ancient word for deity in the language family to which Hebrew belongs uses the word “El” both as a generic term for deity and for one specific deity, the high-god of Canaan. The OT writers didn’t want anyone to think their god was a generic god, nor did they want anyone thinking he was just the Canaanite high-god, so they modified the word into a rather odd plural form, “Elohim.” So both “God” and “the Lord” in the Bible are substitutes for something else. So I guess I can’t be too upset that “Creator” is used in the movie. It could be worse.

It wasn’t designed to go anywhere, to navigate, steer, etc. The word “ark” in Hebrew denotes simply a box or chest. It had to be sea-worthy, of course, but otherwise, we shouldn’t have scenes of Noah, standing at the tiller in the rain, desperately trying to stay on course like Gilligan and the Skipper. Nope. “Ride it out” was the motto aboard Noah’s craft.

Fact #6 Noah got drunk after the flood.

He also had some kind of very unhappy sexual experience involving his son, Ham. As for the drunkenness, a friend of mine asked “Who wouldn’t get hammered after undergoing a worldwide flood and living a year confined in a floating box full of animals and cranky people!” For the record, Noah’s drunkenness does not occur in a cave, as shown in the movie, but in his tent. As for the sexual encounter, we simply do not know what it was, but I’ll be surprised if the movie doesn’t do something with that. It’s the kind of red-meat scandal “Hollyweird” loves.

The Bible has two chronological systems in the story. One is a day-count, with notes like “after 40 days” while the other gives the date, i.e. month and day. On the day-count model, we have 448 days, but on the month-day system, the flood goes 1 year and 10 days. No doubt, some clever soul can harmonize this, but on the plain, literal sense of the text, the author seems not to be splitting hairs on this point.

© Seedbed 2021
Re-Writing Noah: 7 Things You Might Not Know about the Biblical Flood Story
MORE STORIES