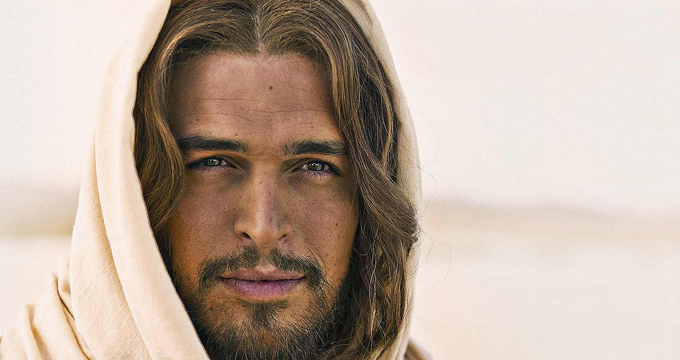 It is extraordinarily difficult to know how to evaluate a film like ‘Son of God’, offered quick on the heels of last spring’s successful series by Burnett and Downey on ‘the Bible’ (the Reader’s Digest version of a sort). Do we evaluate it against the original stories in the four canonical Gospels? Do we evaluate it against other films about Jesus? Do we assess it on its own merits, but that is difficult to do since it is based on such a crucial and iconic story? Shall we evaluate it in terms of its own aims and purposes? Or shall we just assess it on whether it’s a good film or not?

If, for example, the film was not intended to strive for a high degree of verisimilitude (which seems to be the case since there are various obvious historical errors in the story telling), do we give it a pass and simply ask if it makes for good theater? There is a difference however between good opera and soap opera, between art and artificial. And even when something is evaluated as visual art, there is a world of difference between say a Hans Holbein painting of Henry the VIII, which looks so real that you feel like you could pluck the buttons off the King’s jacket, and say Van Gogh’s self-portrait after severing his ear. On that scale, this film is rather closer to an impressionistic painting of the story of Jesus than a Holbein attempt at exact representation and characterization. Let’s talk a few facts first.

On the one hand, it is important to be thankful that anyone in this day and age is trying to put a Jesus film into the secular theaters with a regular production and budget. Kudos to Burnett and Downey for being brave enough to do it. The movie is filmed in Morocco and on a back lot in London, and lasts for 2 hours and eighteen minutes. The scenery will remind you of a good deal of the scenery in Zeferelli’s classic version of the story– Jesus of Nazareth, which was filmed in nearby Tunisia. In many ways this film is like “Jesus of Nazareth” though not nearly so well done, not nearly as long, not nearly as accurate historically or literarily. Nor does it appear to have had anything like the number of scholarly consultants as the Zeferelli film. It takes a good deal more liberties with the Gospel texts than Zeferelli’s film, but it does indeed have a Catholic flavor like “Jesus of Nazareth” in its portrayal of Jesus’ mother on the Via Dolorosa, at the cross, and extraordinarily, in the tomb of Jesus washing his body (something no historical account suggests). It is like the Zeferelli film as well in its cameo appearance of Veronica, not to mention putting the nails in Jesus’ palms, which is clearly wrong (and would not have worked), but matches with Catholic art.

Are there some effecting and effective scenes in this movie? Yes there are. Indeed, there is an attempt quite regularly to go for the emotional jugular vein, especially with Hans Zimmer’s heavy handed score pulsing along almost right through the whole film. The music sometimes underscores the emotions, sometimes it overwhelms and trivializes them. Sometimes a quiet emotional scene would have been better without Zimmer’s Sturm und Drang. One of my favorite scenes is the one depicted in the trailer (below), of Jesus’ first encounter with Peter in his boat. Another would be the confrontation between Jesus and Caiaphas which leads to Jesus’ condemnation. I especially liked the portrayal of the feeding of the 5,000 as well. Less good was the portrayal of the resurrection appearances (Jesus appears too much like an ethereal or ghostly figure in a couple of scenes). I did however like the Last Supper portrayal in this version, and on the whole the portrayal of Judas was convincing.

Are there some good actors and good acting in the film? Most of the reviews have noted Greg Hicks portrayal of Pilate (the ruthless prefect) which, while it does not eclipse that of Rod Steiger in Zeferelli’s film, is still quite good. Darwin Shaw is quite good as Peter as well, but here we must lodge a complaint. Clearly Burnett and Downey are so eager to get to the Passion Narrative that the ministry gets short shrift. The relationship between Jesus and his core disciples and how it developed is not adequately depicted in the film. Only with Peter do we get a bit of a back story, oh yes, and John, who frames the film, and is apparently to be seen as the teller of the whole story. We begin with the Johannine Prologue, and surprisingly end with the Alpha and Omega of Revelation with John in a cave (presumably on Patmos).

There are some distractions. While Mary Magdalene looks like she might be a middle eastern person, Mary the mother of Jesus absolutely does not. What were they thinking? Perhaps they were thinking along the lines of Zeferelli, who framed various scenes according to classic Catholic paintings. It is in any case a hard thing to know how much to go for historical authenticity, and how much to contextualize the story for a modern Western audience. They seem to have leaned much more in the latter direction, and to their credit were trying to be sensitive to Christian sensibilities, especially Catholic ones. This even leads to giving us too much about the wife of Pilate, ala Mel Gibson’s The Passion of the Christ.

There is no doubt in this film that Jesus is being portrayed as both divine and human. That’s clear from the opening scene with the Johannine Prologue, and then the little review of all of salvation history (with flashbacks to the History Channel shows). Note the suggestion from the outset that the Logos/Son of God was present all throughout salvation history helping God’s people along.

Jesus, portrayed by the Portugese actor Diogo Morgado, who reprises his role from the History Channel show of last year is not bad, indeed there are some scenes where he rises to the occasion and is convincing, but there are some scenes which he does not. He seems to be perpetually smiling as well, except of course in the Garden of Gethsemane and on the cross.

After all the thunder of Zimmer’s score, the film ends with closing credits with CeLo Green singing “Mary Did you Know”, and indeed doing an excellent job of it. This is actually better than the orchestral score. Something more along the lines of the Nativity movie score would have worked better than the Zimmer score.

What about the visual effects? After all, we have miracles in this film. The CG of Jerusalem itself is frankly not good enough. There are various times when the wide shots look like CG, not like Jerusalem. This is unfortunate. Jesus’ walking on water is also less than convincing, although I did like what they did with Peter’s attempt to walk on water (and then sinking). I like the reserve used in portraying the healing of the paralytic, the feeding of the five thousand, and the raising of Lazarus as well (though why exactly Jesus was in the tomb blowing on the back of Lazarus’ head is not clear). The close ups of faces were good and very effective, especially in the exchange between Jesus and Pilate. And the splitting of the veil in the Temple while Caiaphas is praying there is reasonably effective. On the whole the portrayal of Caiaphas is pretty good, and the actor who plays him (Adrian Schiller) is convincing. Oddly though, he does not say to Pilate at the crucial juncture that he no longer has the power of capital punishment since there is now a Roman governor in Judaea.

There are some oddities in the Burnett and Downey version: 1) Nicodemus is portrayed as Caiaphas’s right hand man, and an antagonist to Jesus until near the end of the story. Indeed, it is Nicodemus who tests Jesus about paying taxes to Caesar, and Joseph of Arimathea gets short shrift; 2) Barabbas inexplicably is free and roaming around Jerusalem, until he suddenly appears in chains as candidate B for release; 3) there is a particular Pharisee that seems to be following Jesus around from town to town and critiquing him – in Capernaum, in Nazareth, and elsewhere; 4) while the film opens with a patische about Roman oppression in the Holy Land, we see very little of that during the story telling, until of course Jesus is abused at the end; 5) Jesus is crucified on a mountain which is too high, and not nearly close enough to Jerusalem itself; 6) the Great Commission scene at the end takes place in a Dead Sea like location, not in verdant Galilee in April.

In terms of strategy about sources, this version of the story is basically a combination of Matthew and John. So on the one hand we get some of the Sermon on the Mount and the ‘you are Peter’ speech in miniature, and on the other we get the woman caught in adultery, the raising of Lazarus, and Mary and the Beloved Disciple at the cross.

The critics have already weighed in aplenty (at the moment the film is getting a 22% approval rating, which is quite different to the reaction to Zeferelli’s film, or even the Nativity film), and one has to say that this is not an instant classic portrayal of the story, but it does have some good scenes, and it does convey the Johannine message about the divinity and humanity of Jesus. What it almost entirely fails to do is portray Jesus as the Son of Man, even leaving out all the Passion predictions about the Son of Man. But then this film is called ‘Son of God’ and that in the end is what we are meant to see Jesus as in this film. It is a heavy message, which sits uneasily with an audience guzzling Cokes and loudly chewing popcorn.

This film is accessible, but it is certainly not “entertainment” in the usual sense of the term. Indeed, most of its last hour can lead to tears or indigestion or both. As for me, I cry every time I go to a film like this which is even somewhat close to the Gospel. I hate seeing my best friend and Savior abused and killed yet again. I also cry when there are serendipitous moments when the real Jesus appears on the screen, like at the feeding of the 5,000. In short, be prepared for tears of sorrow and of joy. As a way of broaching a conversation with someone about Jesus, this film may be a useful place to start.

Or . . . better yet, if they are more of a reader than a movie goer, you can give them my own attempt to tell the Story behind the four Gospel portraits in my recently released book—The Gospel of Jesus.