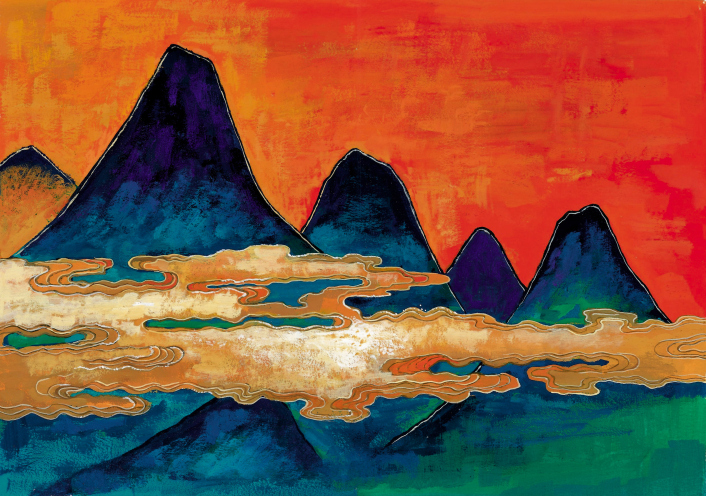 In April 2013, I was blessed to be part of a seminary trip to South Korea, as my scholarship cohort was invited to tag along with the Beeson International Leaders on the second leg of their journey through Asia. The highlight of the trip for many of us was a brief sojourn on Kwanglim’s Prayer Mountain, but this visit ended up having special significance to me in particular.

Prayer Mountain is a retreat that offers a walking trail up the mountain. At various points along the trail, there are depictions (statues and reliefs, primarily) of different scenes from the gospels. Jesus with the little children; Jesus calming the sea; Jesus breaking bread with those on the road to Emmaus; things like that. It sounds simple, but when you’re walking the trail alone, those images—ones we so often take for granted in our “church” culture—can have incredible impact on you. They can evoke a sense of gratitude or shame; a sense of a deep need for repentance; or great joy that this theandric man had walked before you and loved you.

For me, all of the emotions were present, but they came at different points on the trail. The overwhelming majority of my time was spent in confession and repentance, brought on specifically by images of Jesus as the model servant leader at the Last Supper and his prayer in the garden of Gethsemane. These scenes, so familiar to me, were seen with fresh eyes. I hadn’t really personalized much of the passion narratives, but suddenly I was keenly aware that my own sins and selfish ambitions were the ones that sent the only Perfect One to Golgotha. Openly weeping, from that point on, I poured out my heart to the Almighty, telling Him everything I had foolishly tried to hide from an omniscient God. I ran from the Crucifixion to the Resurrection, unable to bear seeing my Lord upon the cross I had given to him. I had to see the empty tomb, stand in it, and give silent praise to his majesty and love before I could finally wipe the tears from my eyes.

Even though the path continued on as a dirt trail beyond that point, I knew I had reached where I needed to be. I started back down the trail almost skipping, for suddenly I had joy and life was a game, a game I had already won—nay, a game someone else had already won for me. I felt a burning whiteness inside me, an incredible knowledge of the Spirit within me that was unmatched by anything prior except my own conversion experience. God was with me, and I was with Him, and we were together on the mountain. I laughed. I smiled.

And then I stopped dead in my tracks.

What most people don’t know is that I had suffered for the last five years or so from some strange variant of cluster headaches, or at least something akin to them; my doctor wasn’t sure. What he was sure about, however, was their affect on me. Over time, I would lose the ability to control the right side of my face, similar to the nerve damage done by a stroke (which is why I thought of the headaches as mini-mini-strokes since Bell’s Palsy had been ruled out despite the symptoms). In the five intervening years, I had already lost the ability to fully smile and the ability to fully close my right eye, even when sleeping.

But walking down that trail on Prayer Mountain, both sides of my mouth had moved freely and without limitation. When I realized this, I experimentally tried it out again. I assumed a neutral expression, then smiled, frowned, half-smiled on both sides, winked, closed my eyes one at a time both quickly and slowly/deliberately, and blinked rapidly. I gingerly put my fingertips to my cheek and noticed that it produced a fuller sensation than before.

A still, small voice spoke from the whiteness inside my chest: “Go in peace; your faith has made you whole.”

I smiled all the way down the trail. I smiled all the way up the trail to Upper Room, where we were to have a small chapel service minutes later. I smiled waiting for it to begin. I smiled during it. And then I shared my testimony of what had happened, and the tears of joy and praise flowed unabashedly. People I hadn’t known even six days before watched me bawl my eyes out, and I didn’t care. My God had healed me. A genuine healing miracle—in me. Even though He hadn’t chosen others, He had chosen me. Words were simply inadequate to express that deep of a level of thanks.

You can deny it all, of course. You can believe that miracles never happen, that there was some spontaneous neurological thing going on in my head that finally sorted itself out. You can say that science simply can’t explain it yet.

But I know the truth. I know that I walked up a mountain in South Korea and God met me there. I know He reached out for me and wrought changes within me that were both spiritual and physical. I know that I was blessed in an incredibly special way that some people never experience. I don’t know why, but I’m not going to question it.

Instead I will honor that incomparably precious gift and keep smiling.