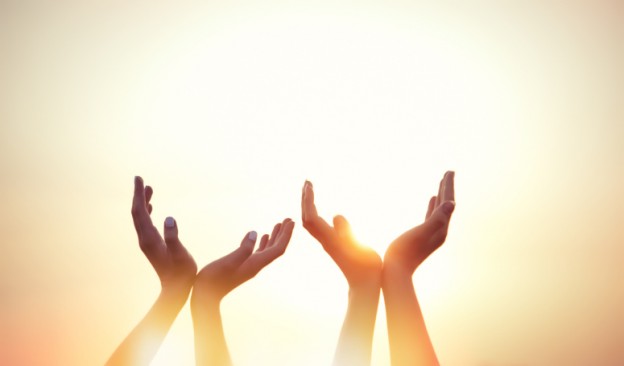 When Vulcans meet, one says “Live long and prosper,” the other responds, “Peace and long life,” and they do that thing with their hands. Leonard Nimoy has often recounted the origin of that Vulcan gesture: When he was a boy growing up in Boston, seven or eight years old, on one of the Jewish high holy days he attended his Orthodox synagogue with his family. At the end of the service, the Cohens—those of the priestly lineage—stood up on the bema to bless the congregation with the priestly blessing of Numbers 6:22–27. Nimoy recalled how, that day, the Cohens were chanting the blessing in Hebrew, rocking and swaying under their prayer shawls, declaring,

“May the LORD bless you and keep you;

may the LORD make his face to shine upon you and be gracious to you;

may the LORD lift up his face upon you, and give you shalom, peace.”

And as the priests chanted the ancient blessing, Nimoy’s father said to him, “Don’t look; don’t look.” All the people around him covered their faces and looked away…but Leonard Nimoy peeked. And as he peeked, he saw the priests lifting up their hands over the people and making that distinctive sign.

The gesture impressed the boy so much that, years later, when the writers first slated the starship Enterprise to visit planet Vulcan and Spock needed to greet those of his homeworld, Nimoy suggested this sign to the director—this sign he wasn’t supposed to see. Thus it came to pass that this symbol which he had witnessed as a child, at that sacred moment in the synagogue service, is no longer a secret—because Leonard Nimoy peeked.

So why did the Cohens make the “Vulcan” sign? Because it is the Hebrew letter shin. Shin is the first letter in several important Hebrew words, such as shalom, “peace,” part of this blessing; and shaddai, and shekinah. But, especially, shin is the first letter in shem—“name.” It is the Name of the LORD (YHWH) which the priests set upon the people in this blessing—“and thus they shall set my Name upon the children of Israel, and I, I will bless them,” God says in Numbers 6:27. The shin was the sign of the shem, the Name of God. Christians glibly utter the Name “Yahweh” without a second’s concern, but Orthodox Jews don’t even like to use the title “Adonai”; they refer to God as “HaShem,” “The Name.” And when the Cohens set God’s Name on the congregation, they not only pronounce the ancient blessing but enact it with their hands—a moment too sacred for casual observation.

When John Wesley sent off his “Sunday Service” for the American Methodists, he instructed the Elders to “let the People depart with this Blessing: ‘May the peace of God, which passeth all understanding, keep your hearts and minds in the knowledge and love of God, and of his Son Jesus Christ our Lord; and the blessing of God Almighty, the Father, the Son, and the Holy Ghost, be amongst you, and remain with you always. Amen.’” More recent United Methodist rubrics include this benediction (Word and Table Service IV) or the briefer 2 Corinthians 13:13 (I, II). Either way, we similarly Name God—in God’s Triune identity—as we mark the people as God’s people. In my congregation, I also use my hands to mark them: I make the sign of the cross. In good Eastern fashion, my thumb and first two fingers are pressed together to recall the Trinity, and my third and fourth fingers are pressed against my palm to signify the dual nature of Christ. In word and sign, we are marked with God’s Name and the ultimate sign of God’s sacrificial love. In word and sign, we are called to be a different kind of people—set apart by the Name of God, set apart to live out that Name in the world. In word and sign, we have God’s good word spoken over us and propelling us to walk worthy of the calling with which we’ve been called.

The benediction is not some throwaway verbiage to get people out the door; it is nothing less than the heart and soul of who we are and whose we are.