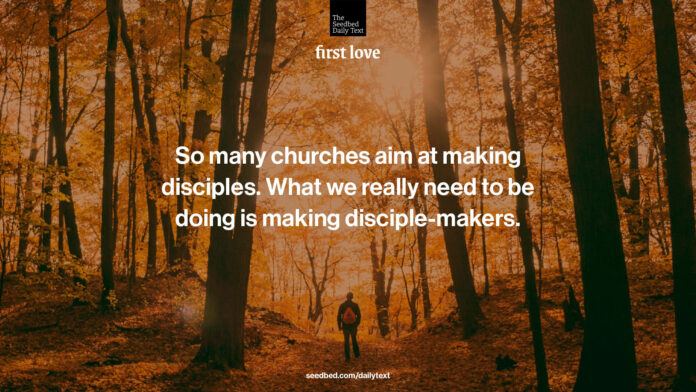 But you know that Timothy has proved himself, because as a son with his father he has served with me in the work of the gospel. I hope, therefore, to send him as soon as I see how things go with me. And I am confident in the Lord that I myself will come soon.

Now, take away the cringeworthy elements of multilevel marketing and apply the downline concept to the gospel. Paul has an extraordinary downline, and disciple 1-A in that downline is Timothy.

But you know that Timothy has proved himself, because as a son with his father he has served with me in the work of the gospel.

In Paul’s second letter to Timothy, he instructs Timothy concerning his own downline, which, remember, is also part of Paul’s downline: “You have heard me teach things that have been confirmed by many reliable witnesses. Now teach these truths to other trustworthy people who will be able to pass them on to others” (2 Tim. 2:2 NLT).

So here are the questions: Do you have a downline? Have you ever thought about whose downline you belong to? Can you think of a person who would claim to be in your downline? I didn’t grow up in a church context where this concept was lifted up as a real value. There was value placed on being a good, God-fearing Christian citizen who helped other people. There was a lot of lip service paid to the idea of “making disciples,” but the notion of being a disciple-maker was just not there.

Jesus made it clear. Our commission is to make disciples. The church organization is never going to get that done. Until we start making disciple-makers, we are just making cookies.

Abba Father, we thank you for your Son, Jesus, who is the ultimate disciple-maker. Bring us into the disciple-maker tradition of Jesus. Come, Holy Spirit, and make us disciple-makers. We pray in Jesus’ name, amen.

P.S. Two weeks from today we’ll be hosting Dr. Steve Seamands (and special guest Rev. Carolyn Moore) for a morning mini-course on the ascension of Jesus Christ. If you were thinking of letting Ascension Day slip by in obscurity again, please reconsider. The Ascension completes the Resurrection, paves the way for the Holy Spirit, opens the doors to the Church, unfurls the banner of the Kingdom of Heaven on Earth. And this year, we’re celebrating. Sign up here.