In Exodus 25, God instructs Israel to prepare offerings for the tabernacle, and also provides instructions for how to build this sanctuary. Many assume that every little detail has symbolic significance—and some of it does. However, we fail to see the practical reasons for much of its design. In this Seven Minute Seminary, Dr. Craig Keener helps situate the Tabernacle in its ancient context, noting both its similarities and contrasts with other temples in the region.

Some of the details that bear theological significance include the general architecture of the building, the lack of furniture for the deity, and the complete absence of images of Yahweh or other assistant deities. Some of the details that likely reflect practical concerns include the colors and materials used. If you’re interested in learning more about the life of Israel in its ancient Near Eastern context, see “Was Ancient Israel Just Like Its Neighbors?” by Bill Arnold. Here he illustrates how the tabernacle/temple, sacrifices, and festivals are both shared and unique to Israel’s neighbors. 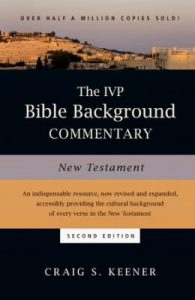 If you’re looking for a single-volume commentary on the Bible, the IVP Bible Background Commentary series comes close! In the New Testament version (now in the second edition) Craig Keener draws on his expertise of Jewish, Greek, and Roman culture to help illuminate the meaning of Scripture. Rather than isolating a biblical text out of its historical setting, we must be attune to the concerns of the original authors, or we will likely fail to grasp its meaning and significance for the 21st century. This volume on the New Testament offers introductory remarks to each book and then verse-by-verse analysis for the entire New Testament. Get your copy of The IVP Bible Background Commentary: New Testament by Craig S. Keener. 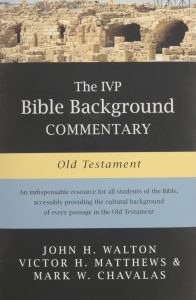 Many of our favorite quotes from the Old Testament, which have become spiritual platitudes, receive richer and truer meaning when listening to the culture and history of in their original setting. While many struggle with the text of the New Testament, the Old Testament is even further removed in time and culture from the 21st century. That gulf of geography and history can only be overcome by careful attention to the original culture of the biblical texts. With literary, historical, and cultural information, this resource helps readers of the Bible understand the theological meaning and significance of the Old Testament. Get your copy of The IVP Bible Background Commentary: Old Testament by John Walton.