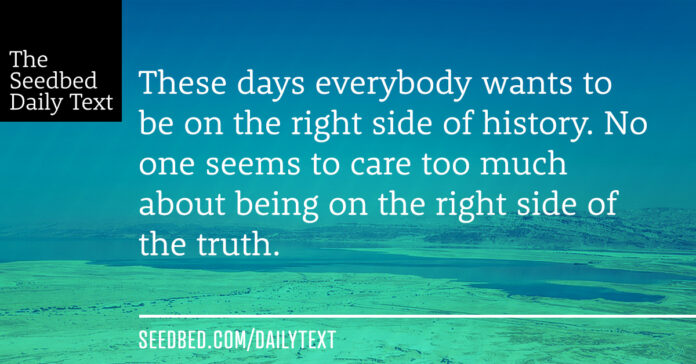 Jesus answered, “You say that I am a king. In fact, the reason I was born and came into the world is to testify to the truth. Everyone on the side of truth listens to me.”

38 “What is truth?” retorted Pilate. With this he went out again to the Jews gathered there and said, “I find no basis for a charge against him. 39 But it is your custom for me to release to you one prisoner at the time of the Passover. Do you want me to release ‘the king of the Jews’?”

40 They shouted back, “No, not him! Give us Barabbas!” Now Barabbas had taken part in an uprising.

I grew up thinking Barabbas was a bad guy. You know, just another garden variety criminal. I thought the people hated Jesus so much they would rather let a convicted murdered go free than save him. It turns out Barabbas was more of a freedom fighter type, an insurrectionist, a hero who had taken one for the team. The people loved Barabbas. He was probably something of a minor celebrity among them. He would make an excellent Passover gift.

And isn’t it interesting how the Roman Governor had a custom of observing the Jewish Passover by releasing one of their prisoners. It’s kind of like he was the agent of the Passover, pardoning a criminal in celebration. It’s all such a joke. Did Pilate have any idea what the Passover meant? Did he know it was the downfall of the Pharaoh? He could have cared less. The Jews were nothing to Pilate and less than nothing to Caesar. Releasing Barabbas was like throwing them a bone to get them out of his hair.

Meanwhile, back at the palace, Pontius Pilate, mid level political appointee that he was, engaged in what must have seemed like yet another of the most inconsequential conversations of his career. Little did he know this interaction with another convicted criminal would ultimately make him more famous than Caesar.

Pilate patronized him: 37 “You are a king, then!” said Pilate.

Listen to what Jesus said to him.

Jesus answered, “You say that I am a king. In fact, the reason I was born and came into the world is to testify to the truth. Everyone on the side of truth listens to me.”

My translation of Pilate’s retort: “Whatever!”

Isn’t that always the world’s posture toward the truth? Whatever!

“Everyone on the side of truth listens to me.”

Truth has a side. We must find our way there.

Abba Father, thank you for your son, Jesus, who not only teaches us the truth but who is himself, the Truth. Grant us the humility to love the Truth and the courage to stand by his side no matter what. We pray in Jesus’ name. Amen.

1. How would we know we were on the side of Truth?

2. How do you respond to the question, “What is truth?”