Do You Know the Rest of the Story? - Seedbed
close
Menu 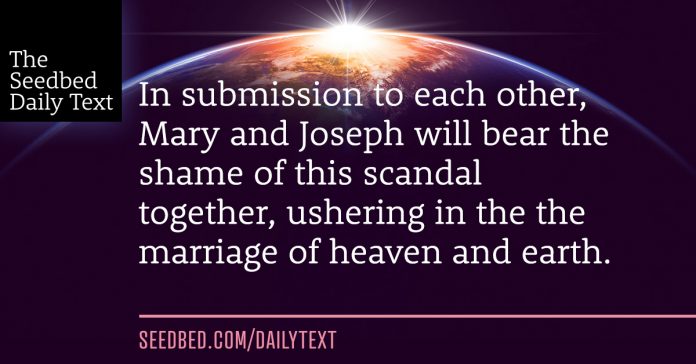 18 This is how Jesus the Messiah was born. His mother, Mary, was engaged to be married to Joseph. But before the marriage took place, while she was still a virgin, she became pregnant through the power of the Holy Spirit. 19 Joseph, to whom she was engaged, was a righteous man and did not want to disgrace her publicly, so he decided to break the engagement quietly.

20 As he considered this, an angel of the Lord appeared to him in a dream. “Joseph, son of David,” the angel said, “do not be afraid to take Mary as your wife. For the child within her was conceived by the Holy Spirit. 21 And she will have a son, and you are to name him Jesus, for he will save his people from their sins.”

22 All of this occurred to fulfill the Lord’s message through his prophet:

23 “Look! The virgin will conceive a child!
She will give birth to a son,
and they will call him Immanuel,
which means ‘God is with us.’”

24 When Joseph woke up, he did as the angel of the Lord commanded and took Mary as his wife. 25 But he did not have sexual relations with her until her son was born. And Joseph named him Jesus.

I know what you’re thinking: Isn’t this the same Daily Text verse from yesterday?

Yes it is. Because as Paul Harvey used to say, it’s time for the rest of the story.

Yesterday we looked at Mary. Today it’s Joseph’s role in all of this. When you think about it, Joseph gets next to nothing this time of year. There are no carols with him. The Baby Jesus, Mary, angels, shepherds, wise men—even lowing cows all get lyrics. But Joseph gets nothing.

So first, let’s recap the situation: Joseph and Mary are betrothed, which in their culture was more akin to being married, just not yet fully consummated. A betrothal involved entire families from both sides, including transfers of money, property, and other legal obligations.

A bride becoming pregnant before the final marriage ceremony would bring shame to both families. She would be the one considered guilty, so under the law there were two options for Mary: One, be sent back to her father’s house and never get to marry again. Two, be stoned to death while people quoted Scripture over her.

Our text today calls Joseph a “just man” who looks like he’s going to quietly let Mary go in order to spare her either fate. The text also says Joseph “considered this,” and the Greek word here also means “to become angry.”

So Joseph is understandably upset, but in this patriarchal culture he wants to spare Mary, and probably keep the shame out of the public and behind closed doors. But God has a different idea. The angel shows up and essentially says, “Don’t break up. Stay married. You’re in this together.”

Why? Well, remember how we got here. Creation began with a marriage: “… a man leaves his father and mother and is joined to his wife, and the two are united into one” (Genesis 2:24)

But later, mission failure takes what was mutual and destroys it: “And you will desire to control your husband, but he will rule over you” (Genesis 3:16).

But just like Mary with childbirth, God uses Joseph to help redeem the curse through one of the other ways it was manifest: marriage.

Joseph doesn’t rule over her. He doesn’t rescue her. He submits, to her and God. As Paul says in the intro to his famous marriage advice: “Submit to one another out of reverence for Christ” (Ephesians 5:21).

When Joseph takes Mary home to meet his family in Bethlehem, the Gospel of Luke says she’s “obviously pregnant.” But in submission to each other, they will bear the shame of this scandal together, ushering in the the marriage of heaven and earth.

Joseph probably knew the derogatory names people would give to this child born out of wedlock. But he is called Emmanuel: “God with us.” And so the child who looks like he is born from sin, and will bring shame to the house of David’s ancestors, is instead the Son of David born to save the whole world from sin and shame.

The manger is the invitation to the the good news that, no matter what our sin or shame, God so loved the world that he gave his one and only Son to save us.

And now you know the rest of the story.

Heavenly Father, we are thankful that Mary and Joseph submitted to you, and to each other. Give us their spirit this Advent, that out of our love for Jesus and his love for us, we can submit to each other, ushering in your new creation, and freeing us from our sin and shame. In Jesus name we pray. Amen.

© Seedbed 2021
Do You Know the Rest of the Story?
MORE STORIES