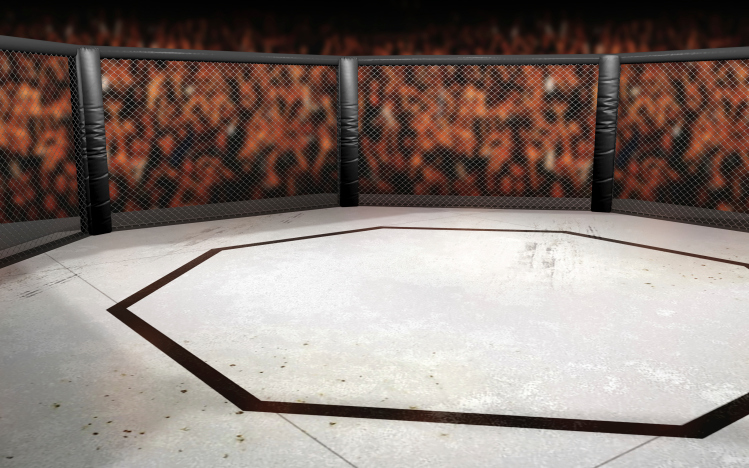 Many consider Mixed-Martial Arts to be a brutal sport not worthy of a Christian’s attention. But Drew McIntyre, a Methodist minister, insists he’s learned profound insights about pastoral ministry from watching the matches. Here he shares 5 points he’s learned over the years.

I’ve been semi-obsessed with Mixed Martial Arts (MMA) for years. In fact, outside of Duke basketball, it’s the only sport I follow seriously. MMA, most commonly known through the UFC promotion, is a combat sport which combines various martial arts like Brazilian Jiu-Jitsu, wrestling, boxing, and kickboxing. In watching this sport grow in popularity and acceptance over the last decade, and with a continually growing respect for its promoters and competitors, I have learned a number of lessons for pastoral ministry. Below are five such lessons.

Rankings are a constant in many sports, but in an unpredictable, individual sport like MMA, they are often meaningless. Like boxing, every fighter that enters the ring has a “puncher’s chance.” That is, when any two people enter the Octagon (the UFC cage), either could win. Upsets happen all the time. And when you are dealing with such a subjective sport, it is often hard to decide who is better: the strong but boring grappler, or the flashy knockout artist? How do you weigh one fighter’s worth against another?  Moreover, trying to figure out who would beat who based on previous opponents – commonly called “MMA Math” – is famously imprecise.

As pastors we also need to “ignore the rankings.” Comparison is the bane of a peaceful existence to clergy, and unfortunately we are can be a competitive, bitter lot. Whether in a call system, where pastors are hired and fired by the local congregation, or a sent system, where a bishop or other authority appoints pastors, we too often value ourselves and others based on the size of our congregations and the salaries we are given.

I was once in a seminar where Fred Craddock was asked who the best preacher in the country is. His reply was both brutally honest and unexpected: “We don’t know.” So much of the skill of a preacher is tied to their particular context, to the locale and people, he argued, that it was impossible for anyone to know who the best (read: highest “ranked”) pastor might be.

Rankings are artificial. Just be the best pastor you can be, and let others worry about rank. That leads us to #2.

2) Never Leave it in the Hands of the Judges

This is UFC President Dana White’s favorite expression. MMA judging is the talk of many fans, fighters, and journalists. A relatively new sport, MMA still uses the “10 point must” system from boxing, which often means a blowout round and a round barely won are scored the same. This regularly leads to controversial, and sometimes downright maddening, decisions. Dana White’s usual refrain in those situations? “Never leave it in the hands of the judges.”

Like the pitfalls of MMA judging, much of what we do as pastors is subjective and difficult to quantify with objectivity. In such an environment, the only safe bet is to take “the judges” out, and go for the knockout or submission. Whether we are molding a sermon, writing papers for an ordination committee, or laying the groundwork for an important vote in the church, the only safe bet is to not let it go to the judges. Go all out, and leave nothing in the cage. Empty yourself, in the words of the Phil. 2 Christ-hymn.  Our vocation is worthy of such a cross-shaped offering.

Mixed-Martial Arts began – whether in the UFC or the old Gracie Challenge days – as a contest to see which “style” of martial arts is superior. Can a boxer beat a karate fighter? Can a kung fu expert stand up against and American wrestler? The early years were marked by these kinds of contests. But eventually, the karate fighter had to learn to throw a hook, and the wrestler learned to kick. If one wanted to be competitive, they could not neglect any discipline. Mixed-Martial Arts was born.

So it is with pastoral ministry. Leading a church requires more than just being an excellent preacher, a skilled administrator, or a wise counselor. It requires a careful study and diligent mastery of a variety of skills. Can anyone master them all? It is doubtful. Most successful MMA fighters still have a “base” or core skillset, such as judo or kickboxing. But, like those fighters, one skill will not be enough to reach our full potential as pastors. Thus we grow our strengths while shoring up weaknesses, because the complex work of ministry – outside of some rare and highly specialized position – requires a wide variety of gifts, none of which can be neglected if we are to best serve God and our people.  A ministry degree is just the beginning.  Leave no discipline unstudied, and keep growing.

4) The Best Fighters Usually Come from the Best Teams

Unlike boxing, MMA is in some ways a team-based sport. In the ‘sweet science,’ a camp (period of preparation for a specific fight) is usually built around training a single fighter for their next bout.  MMA fighters, however, usually come from teams based in specific gyms with a particular set of coaches. Rather than prepare one fighter at a time, the team system means a whole group of highly skilled fighters sharpens each other constantly, as each has a fight approaching. Some of the top gyms right now include Jackson/Winklejohn’s (home of UFC light heavyweight champ Jon Jones) and Team Alpha Male (which specializes in lightweight fighters, including new bantamweight champ T.J. Dillashaw).

Likewise, pastors are only as effective as the people around us: the mentors, coaches, senior pastors, friends, co-workers, and other pastors with whom we are surrounded. Women’s UFC champ Rhonda Rousey has said on multiple occasions that we are the average of the five people we are with the most. As pastors, the folks who influence us are crucial. We will be indelibly marked by the pastors on whom we model our ministry, the seminary professors we study under, and the mentors who invest in us. Champions are usually made by other champions, and excellent pastors are often found around one another, also.  Choose your team wisely.

5) We Can Fight, and Still Hug it Out After

One of my favorite aspects of professional MMA – and this may surprise you – is the sportsmanship. It is routine for fighters to compete with abandon, battering and bruising each other, and then sing each other’s praises, shake hands, and even hug afterwards. Quite often the fights possessing the most raucous build-up, with trash-talking on both sides, will end with politeness and respect.

In the church, whether at the local, regional, or denominational level, we all need to learn that it is possible to have serious disagreements and still walk away respecting each other. A fight does not have to mean the end of fellowship. In fact, if we approach conflict in a healthy manner, our greatest opponents often call forth the best effort from us – and in that sense our most significant enemies are our often invaluable sources of growth. We can fight, and hug it out afterwards, because the person across the cage from us is doing us a favor, whether they know it or not.  If Jesus can sit at the table with Judas and Peter, we should be able embrace our opponents, too.

WesleyCast is a collaborative podcast including interviews, reflection, and commentary from across the Wesleyan/Methodist world. This exciting new Wesleyan resource comes from three United Methodist pastors: Evan Rohrs-Dodge from New Jersey, Stephen Fife from Louisiana, and Drew McIntyre from North Carolina, most commonly known from the Via Media Methodists project.