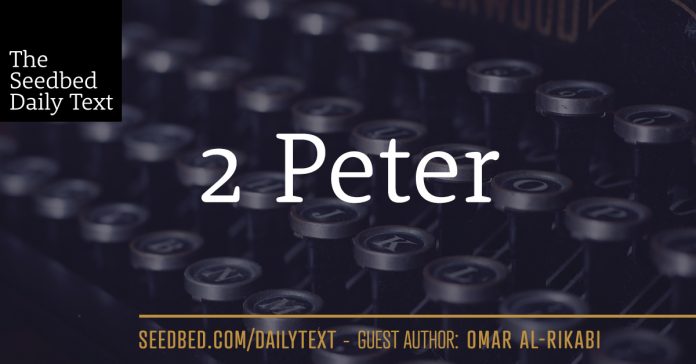 4 For God did not spare even the angels who sinned. He threw them into hell, in gloomy pits of darkness, where they are being held until the day of judgment. 5 And God did not spare the ancient world—except for Noah and the seven others in his family. Noah warned the world of God’s righteous judgment. So God protected Noah when he destroyed the world of ungodly people with a vast flood.

Have you ever stopped to consider that we’ve so sanitized the Noah and the Ark story that it’s become a significant staple of most children’s ministries? How many nursery and preschool walls great tiny tots with giant murals of animals smiling from the deck of the boat, looking like the zoo waving bon voyage on a cruise.

And how many benevolent, Santa-esque Noah’s are cut out and propped up by the parent’s sign-in table, while gentle waves roll down the hallway walls, ending in a giant rainbow.

Not to be crass, but where are the floating dead?

The Noah and the Ark story is one of the darkest and deadliest stories in the Old Testament. Far from the basis for a children’s program, Peter uses it today as a dire warning of the consequences for the greed of false teaching.

Yesterday we saw how that greed leads to idolatry. Now he lays out the repercussions with the flood story from Genesis 6:1-2 and 5-8:

1 Then the people began to multiply on the earth, and daughters were born to them. 2 The sons of God saw the beautiful women of men and took any they wanted as their wives…

5 The Lord observed the extent of human wickedness on the earth, and he saw that everything they thought or imagined was consistently and totally evil. 6 So the Lord was sorry he had ever made them and put them on the earth. It broke his heart. 7 And the Lord said, “I will wipe this human race I have created from the face of the earth. Yes, and I will destroy every living thing—all the people, the large animals, the small animals that scurry along the ground, and even the birds of the sky. I am sorry I ever made them.” 8 But Noah found favor with the Lord.

Peter gives us more detail on the first part of the story, about the sons of God and the women of men, from the apocryphal book of 1 Enoch. Jewish tradition said that these were angels who came to have sex with human women, and as a result they were imprisoned in hell until final judgement.

Then, in Genesis 6:13 God gives the second reason for the flood: “So God said to Noah, ‘I have decided to destroy all living creatures, for they have filled the earth with violence.’”

So it all comes down to broken sexuality and violence. These are the fruits of Adam and Eve’s idolatry at creation. After their rebellion, they were naked and ashamed. Not long after, Cain killed his brother Abel.

And if creation began with God speaking life out of the chaos of water, then the flood is the un-creation: chaos rising back up to take life in a watery holocaust.

So where’s the gospel in all this? What’s the good news? Isn’t this supposed to be my coffee and devotional to start the day positive and encouraged?

But maybe we shouldn’t run to the happy ending so fast, but instead sit with the uncomfortable tension Peter is creating for us. Because as we’ll see, he’s just getting started. Greed, broken sexuality and violence—and both God’s and our response to them – are going to be themes throughout the next several verses of Peter’s final sermon before we start to see the good news.

But we can end on a word of encouragement today. Peter says that, “Noah warned the world of God’s righteous judgment. So God protected Noah when he destroyed the world…” Even though no one would listen, Noah didn’t sit idly by while sin and brokenness took over. He was faithful and spoke up, and for that God protected and delivered him. So while it should be obvious, I’ll say it anyway: Go be like Noah.

Heavenly Father, help me in the uncomfortableness of today’s story. Help me not to shy away or sanitize the tough stuff, but let all of your Word have all of its way with me, so that I can be faithful like Noah. In Jesus name. Amen.

What is your first gut reaction to today’s message? Are you offended? Convicted? Encouraged? Something else? What do you see Peter setting up here, and what is the Holy Spirit possibility for you?