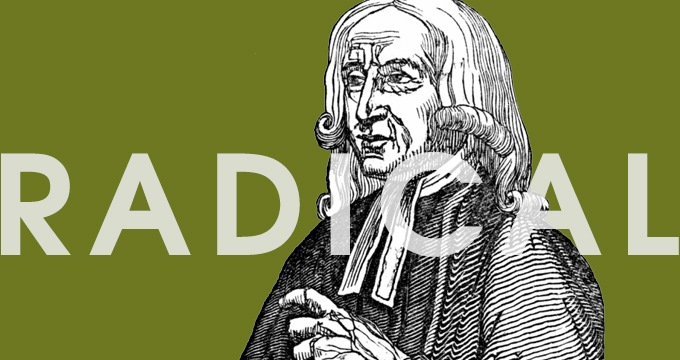 Synthesis and Radical: Howard Snyder argues that John Wesley exemplified both in a way that is unprecedented in the history of the Christian Church.

And yet, this is precisely where John Wesley was radical. He was a genius at the balance and interplay of experience, structure, and doctrine. Digging into Scripture, studying history and the created order, and reflecting on his own experience, Wesley held together in creative tension key truths that tend to fly apart in most periods of church history.

Wesley’s genius, under God, lay in developing and nurturing a synthesis in doctrine and practice that kept biblical paradoxes paired and powerful. He held together faith and works, doctrine and experience, the personal and the social, the concerns of time and eternity. A synthesis that speaks profoundly to the church today.

Wesley held tenaciously to both the total sovereignty of God and the freedom of human beings to accept or reject God’s grace. Through faith and obedience, Christians cooperate with the Holy Spirit in the work of salvation—in their own personal lives and in the world.

Wesley stressed the image of God as well as the Word of God. Human creation in the divine image was fundamental for Wesley because it meant a deep, ineffaceable similarity between the human spirit and the Spirit of God which even the tragic effects of the fall could not destroy. Salvation was still possible. But only by God’s grace, because sin put men and women under such bondage that they could never freely turn to God.

The key to Wesley’s skill in stressing both God’s sovereignty and human freedom was his doctrine of grace, particularly his accent on “prevenient grace.” On their own, human beings cannot take the smallest step toward God. But God has not left us alone. An unconditional benefit of Christ’s atonement is that God maintains the human race in a savable position. God’s grace is “prevenient”; that is, it “goes before” (Latin, praevenire, to come before, anticipate) us, giving us the capacity, if we will, to turn to God. Yet even this turning is aided by God’s grace shed abroad universally in the world by the death and resurrection of Jesus Christ.

Because of his double accent on divine sovereignty and human freedom, Wesley focused on Christian experience. He looked for moral transformation in believers’ lives, demonstrated by their behavior.

Wesley stressed both doctrine and experience—“faith working by love.” If faith didn’t produce moral change, including good works, it wasn’t real. Thus also Wesley’s concern with sanctification: Regeneration began and enabled growth in holiness, so every believer was morally obligated to “press on to perfection.” Justification and sanctification went together.

Wesley’s oft-repeated stress on both inward and outward holiness is evidence of this balance of doctrine and experience. An inner experience of God in the soul which does not result in one’s “doing all the good you can” is inherently suspect. Wesley’s concern for sanctification simply shows he really believed that doctrine and experience go together. Men and women do not truly believe the gospel without a moral change which enables them to live it. Faith not only believes; it works—in both senses.

This gave Methodism a strong ethical sensitivity and underscored the important role of the church.

Here is the aspect of the Wesleyan synthesis with perhaps the greatest potential impact for the church today. Wesley saw the vital link between experience and structure. Perhaps no one in church history was more keenly aware of the relationship between Christian experience and appropriate nurturing structures, or was as successful in matching church forms to church life.

Wesley’s system of societies, classes, and bands in large measure formed the genius of the discipline, growth, and enduring impact of Methodism. To these were added many other structures including schools, dispensaries, and loan funds for those in need.

The Methodist system grew out of Wesley’s keen awareness of the social nature of Christian experience—the balance of the person and the community.The great instrument for building this quality of community or fellowship was the Methodist system of society, class meeting, and band. For Wesley, the class meeting was an ecclesiological statement, integrally linked to sanctification. In Wesley’s view, if believers were really serious in their quest for holiness they would band together in small groups to experience that level of community which is the necessary environment for growth in grace.

The implication for today’s church is obvious: the recovery of some functional equivalent of the class meeting with its intimacy, mutual care and support, and discipline is essential.

4. The Charismatic and the Institutional

The curious thing about early Methodism is that it was a charismatic church within an institutional church. Many point to Methodism’s separation from the Church of England as sure proof of the inevitable failure of Wesley’s theory and approach. But it is not at all clear either that the final outcome was inevitable or that eventual separation means failure.

It will always be argued (from both sides) that Wesley’s institutional–charismatic synthesis is fundamentally inconsistent and impossible. I argue rather that it is essential to the larger Wesleyan synthesis. I believe Wesley’s fundamental perspective is sound and insightful when viewed biblically, historically, and sociologically.
Balancing the charismatic and institutional dimensions of the church, yet with the primary accent on the charismatic: This was Wesley.

Wesley affirmed both present and future salvation. No one can accuse Wesley of underemphasizing eternal blessedness with God. In fact, Wesley’s understanding of the kingdom of God at times appear too otherworldly and too static. But Wesley’s insistence on sanctification (Christian perfection—that is, perfecting) centered in the present reality of the life of God in the human soul. A progressive, dynamic reality. Wesley reasoned that if holiness could come at death, God could just as surely enable holy living now.

By stressing “all inward and outward holiness” (a favorite phrase), Wesley kept Christian experience from retreating into a private inner world divorced from the problems and sufferings of daily life. Holiness involved making a present stand for righteousness—the “justice, mercy, and truth” of the kingdom of God, with particular concern for the poor.

True renewal is always a return at the most basic level to the image of the church as presented in Scripture and as lived out in a varying mosaic of faithfulness and unfaithfulness down through history. John Wesley represents an intriguing synthesis of old and new, conservative and radical, tradition and innovation that can spark greater clarity in the quest to be radically Christian.

I see Wesley’s synthesis of divine sovereignty and human freedom, doctrine and experience, experience and structure, the charismatic and the institutional, and present and future salvation, as truly amazing—in fact, unprecedented in history.

Get the Book, The Radical Wesley in our store now.

Read a testimony from someone who’s read the book.