Why Unity Without Like-Mindedness Is Not Unity - Seedbed
close
Menu 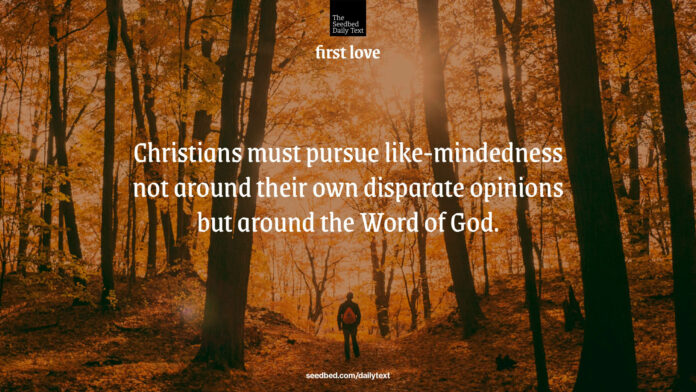 Therefore, my brothers and sisters, you whom I love and long for, my joy and crown, stand firm in the Lord in this way, dear friends! I plead with Euodia and I plead with Syntyche to be of the same mind in the Lord. Yes, and I ask you, my true companion, help these women since they have contended at my side in the cause of the gospel, along with Clement and the rest of my co-workers, whose names are in the book of life.

How would you like to be Euodia and Syntyche—immortalized forever as those two women who got called out by Paul in the Bible, no less? Their  names are on the board with a checkmark for all eternity to come!

It bears repeating. Paul’s goal, as the planter and overseer of churches, is not unity but like-mindedness; not latitudinarianism but love. Remember his earlier word to the Philippians.

Therefore if you have any encouragement from being united with Christ, if any comfort from his love, if any common sharing in the Spirit, if any tenderness and compassion, 2 then make my joy complete by being like-minded, having the same love, being one in spirit and of one mind. (2:1–2)

Like-minded, same love, one in spirit, of one mind. It strikes me that in the midst of conflict, the remedy is not unity at the expense of like-mindedness. The remedy is to pursue like-mindedness. Even more important is the source of our alignment. Republicans and Democrats will never align around core convictions and vision. They see the world from two very disparate points of view. The best that can be hoped for is some form of compromise.

Christians, on the other hand, must pursue like-mindedness not around their own disparate opinions but around the Word of God. Where divergent interpretations of Scripture cannot be reconciled, both parties must own this. In pursuing like-mindedness, what is most needed is the mind of Christ. Neither should be expected to abandon their conviction in the interest of unity, for it would not be unity at all. It is better to pursue separate visions with mutual respect and some modicum of love, which itself can be harmonizing despite the disparateness, than to live in open disagreement and defiance of one another while calling it unity.

Abba Father, we thank you for your Son, Jesus, who prayed that we would all be one just as you are one. Thank you that this is your work to accomplish, not ours. Thank you for calling us to pursue like-mindedness around your Word. Give us a humility that becomes the mind of Christ, that we might learn to love others the way you love them. We pray in Jesus’ name, amen.