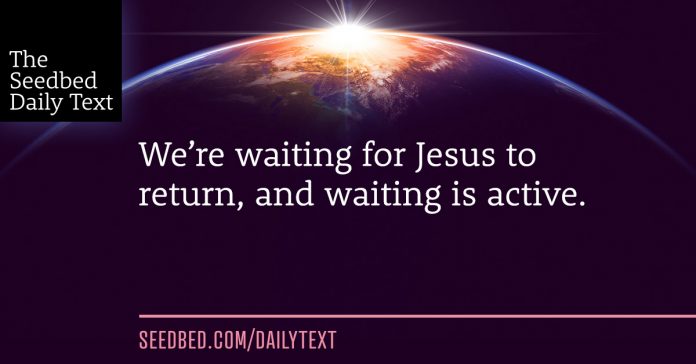 1 Even the wilderness and desert will be glad in those days.
The wasteland will rejoice and blossom with spring crocuses.
2 Yes, there will be an abundance of flowers
and singing and joy!
The deserts will become as green as the mountains of Lebanon,
as lovely as Mount Carmel or the plain of Sharon.
There the Lord will display his glory,
the splendor of our God.
3 With this news, strengthen those who have tired hands,
and encourage those who have weak knees.
4 Say to those with fearful hearts,
“Be strong, and do not fear,
for your God is coming to destroy your enemies.
He is coming to save you.”
5 And when he comes, he will open the eyes of the blind
and unplug the ears of the deaf.
6 The lame will leap like a deer,
and those who cannot speak will sing for joy!

In today’s text, the prophet Isaiah tells the story of a people freed from their slavery to the consequences of sin. Looking to the future, he says the rescue of humanity, and the restoration of God’s Kingdom, would be when the eyes of the blind were opened, the ears of the deaf were unstopped, and the lame leaped like deer.
In the New Testament, when John the Baptist was in prison, he sent a message to Jesus and asked if he was the Rescuer? Was he bringing the Kingdom, or would it be someone else? What’s interesting is Jesus doesn’t just answer yes or now, he responds by subversive code in Matthew 11:2-4:

2 John the Baptist, who was in prison, heard about all the things the Messiah was doing. So he sent his disciples to ask Jesus, 3 “Are you the Messiah we’ve been expecting, or should we keep looking for someone else?” 4 Jesus told them, “Go back to John and tell him what you have heard and seen— 5 the blind see, the lame walk, those with leprosy are cured, the deaf hear, the dead are raised to life, and the Good News is being preached to the poor.”

There’s a tension here called the “already/not yet.” Jesus is on the scene to establish his Kingdom by his life, death, resurrection, and ascension. But it will not be fully realized until he returns. We call this the “already, not yet” because his Kingdom is already here, but it is not yet had final victory.

We’re waiting for Jesus to return, and waiting is active. Into this tension Advent gives us our mission.

To illustrate what this looks like, consider the story of the Underground Railroad… the secret network of individuals, groups, churches, and others who helped slaves escape from the South to the North and Canada.

Howard Snyder points out that, though Abraham Lincoln had not yet delivered the Emancipation Proclamation, the people of the Underground Railroad lived as though it had already happened, and so worked to free as many slaves as they could, usually by subversive means.

One such story of subversion is the tale of Dr. Alexander Ross. After having a conversation with an abolitionist, a convicted Dr. Ross became creative in helping slaves escape: He pretended to be a scientist studying birds. This ruse would allow him onto plantations, where he would quietly give slaves information on routes of escape. Sometimes he would offer them food, money, compasses, weapons, and the names of people who would shelter them.

He once pretended a female slave was his personal servant and led her all the way to Ontario to be reunited with her husband. According to his records, Ross helped free at least 31 slaves.

Subversion. It means the undermining of the power and authority of an established system or institution.

This is how we get ready for his return, to go subversively among the plantations of sin and take the time to walk with that one person to freedom. To live our lives in the upside down of the already/not yet – helping the blind see, the deaf hear and the lame walk – as we wait in hope for Christ our Judge to return and proclaim a final emancipation from the world’s slavery to sin and death.

Heavenly Father, fill us with Holy Spirit courage to walk subversively in this world, living all the promises of the Kingdom now, until Christ comes in final victory. In his name we pray. Amen.