Why We Don't Live in America Anymore - Seedbed
close
Menu 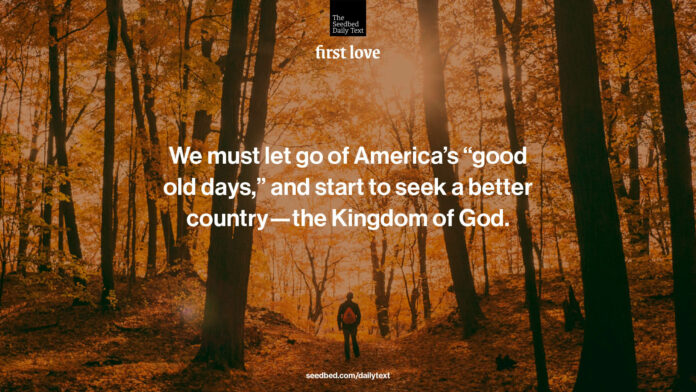 Whatever happens, conduct yourselves in a manner worthy of the gospel of Christ. Then, whether I come and see you or only hear about you in my absence, I will know that you stand firm in the one Spirit, striving together as one for the faith of the gospel without being frightened in any way by those who oppose you. This is a sign to them that they will be destroyed, but that you will be saved—and that by God.

Whatever happens, conduct yourselves in a manner worthy of the gospel of Christ.

What do you hear when you hear Paul say this?

Do you know what I hear? I hear him say, “Behave!”

Attention, readers. We do not live in that America any more. We live in Philippi (in a manner of speaking). We now live in an age where people do not define themselves by their sex but by their sexuality. And when it comes to one’s sex, Facebook now offers somewhere upward of seventy different options for gender selection. Today there are just more than one thousand casinos operating across our fifty states. Forty-four of our states have lotteries. This year we will see just shy of one million abortions. Within twenty years, marijuana will be legal in one form or another in every state.

And all of this is happening on our watch. The late, great, gospel prophet of country music, Merle Haggard asked the question well, “Are we rolling downhill like a snowball headed for hell?” So what are we to do? Get mad at the world? Protest? Retreat and hide?

We do not live in that America anymore. We live in Philippi. Whatever that America was, it’s not coming back anytime soon. In fact, we need to let it go. We must let go of America’s good old days and start to seek a better country—the kingdom of God. If we were missionaries to Philippi, we would probably not show up and start critiquing every aspect of their culture, for better or worse. No, here’s what we would do:

Whatever happens, conduct yourselves in a manner worthy of the gospel of Christ.

What is conduct worthy of the gospel? Far from a thin veneer of moralistic behavior, the gospel is about becoming a new creation, a profoundly humble, pure-hearted, radically embracing person of extraordinary, holy love. It’s not so much about what we don’t do but who we are becoming together. It’s about becoming a community of people whose relationships are telling a different story, who are writing an alternative ending to an otherwise broken storyline.

What if we thought of ourselves as those people, as citizens of another country who now find ourselves in a strange land? How would we want to conduct ourselves? Would we be mad at people who got abortions and went to casinos and smoked pot and regularly changed their gender identification? I suspect we might develop enormous compassion for them.

In the coming days, Paul will give us the most compelling vision on the planet of conduct worthy of the gospel. For now, he encourages us:

Stand firm in the one Spirit, striving together as one for the faith of the gospel.

The gospel is a team sport. Isn’t it time we got off our high horses and joined that team in a new way (or maybe its in an old way)?

Abba Father, we thank you for your Son, Jesus, who loves the broken and the confused and the ones who are lost and have no idea of it yet. Let us not forget we, too, were and sometimes are those people. We need a better vision of the gospel, not one of compromise but of love at another level. Come, Holy Spirit, shake us free from our complacent complaining. Get us in the game while there is still time. In Jesus’ name we pray, amen.

© Seedbed 2021
Why We Don't Live in America Anymore
MORE STORIES