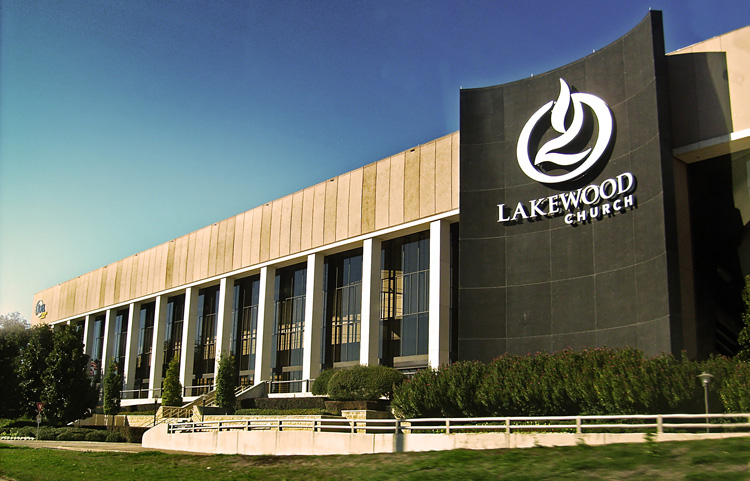 I am a pastor serving temporarily at Lakewood Church in Houston Texas.  Yes, Lakewood is also the name of another Houston church pastored by the famed Joel Osteen, but no, this is not his church.  To the many who regularly call us, looking for that church, looking for that man, I tend to be clear that our community is different: this is a Methodist church, we are not located in the former home of the NBA’s Houston Rockets, and Lakewood was our name long before it was his…please feel free to visit us, you are welcome here!

As is evident, I am fairly defensive about this.  Joel Osteen is neither a person I would typically want to associate myself with in ministry, nor a person from whom I want others learning too much.  In the eyes of the overwhelming majority of the evangelical world Osteen is prodigal.  Maybe not to the extent of those who wear a suit and tie, name tags, and go knocking door to door but not too far from it.   His gospel is dangerously thin, lacking healthy doses of some pretty fundamental things like sin and repentance.  His sermons are eerily akin to positive, inspirational talks; they are pseudo-sermons, something far short of the full proclamation of the gospel.

But Joel Osteen’s reach is undeniable.  His church is the largest mega church in North America.  His weekly sermon broadcast hits the television screens of over seven million Americans each week.  Osteen was identified as the most watched inspirational figure in America by the media tracking powerhouse, Nielsen Media Research.  Osteen’s 2004 publication, Your Best Life Now, was #1 on the New York Best Seller List for over 2 years.[i]

At a recent weekend event in a local Houston prison, I introduced myself as a pastor from Lakewood United Methodist Church (I was intentional in my differentiation).  In almost every single following conversation with an inmate it was assumed that I was actually part of Joel Osteen’s church, (most of these guys couldn’t even pronounce Methodist).  It wasn’t only that these fellows knew about Lakewood and knew Joel Osteen’s name, it was more – they had family members that attended there, they were proud to have at times watched the broadcast themselves, and they were obviously impressed by Osteen’s preaching, repeating phrases like ‘going for the victory’ or ‘living in God’s blessing.’

As much as this made me want to watch an Osteen sermon, deconstruct it, and cry heresy another thought occurred to me while sitting in that prison; while sitting in that prison enjoying one of the most wonderful experiences of sharing the gospel with some of the most receptive and honest people I had sat with in a long time: maybe I should just partner with Joel Osteen instead.

Before I am written off, allow me to offer some thoughts on why this actually is not that ridiculous of an idea:

1. Osteen is engaging a demographic of folks most churches probably are not.

If most mega-churches tend to be more demographically homogeneous, Lakewood is the exception to the rule.  Those filling the pews of the former Compaq Center are amazingly diverse; they are people from all different ethnic backgrounds: Caucasian, Hispanic, African-American, Asian, you name it, they are probably one of the 47,000 people worshiping on a Sunday morning.  The Lakewood demographic actually closely mirrors that of greater Houston; something many churches aspire to and fall far short of.

Lakewood is also filled with the poor.  This is not only an empirical observation made by those who visit the church, as scholars Christine Miller and Nathan Carlin observe “people of low socioeconomic status seem to be drawn to Lakewood Church.”  Your Best Life Now had a higher readership among people without a high school diploma than a college degree.[ii]

Now let us self-reflect, how many former prisoners are attending our churches?  What percentage of our congregations are non-white?  What percentage of our congregation owns its home?  I am not intending to knock our churches.  What I am saying is most of our churches are not filled with the same demographic of people.  Even if Lakewood is not engaging them in the best way with the full gospel these people nonetheless are being reached.  The fact of the matter is our churches are not doing it, or not doing it very well.  Maybe we should start paying attention to Osteen’s ministry.  Why is it reaching these people and what elements of the Lakewood ministry might help our churches also engage all of God’s children with the gospel?

2. Joel Osteen may not be as much of a wolf in sheep’s clothing as we think—he surprisingly upholds a fair bit of orthodoxy.

Some of the best indicators of this in more recent years are the other mainstream evangelical figures who have been invited to the Lakewood pulpit, such as Rick Warren and Steven Furtick.  For the third time, this summer, Lakewood continues to move closer toward the evangelical middle hosting the Hope and Life Youth Conference which features speakers like Louie Giglio and the worship leaders Jesus Culture.

As for evidence of Osteen’s theology, one good place to look is the Lakewood website.  A brief glance at the What We Believe Section reveals concise statements on things like The Bible, The Trinity, and Growing Relationship.  If we are willing to be honest, these theological summaries are ones that might easily be found on the website of any mainstream evangelical church.[iii]

In an interview with The Christian Post, when asked about his primary message, Osteen replied: “…that God is a good God, that He is on our side, that when we obey Him, trust him and love Him, we’re going to live a rewarding life. I guess when you boil it down, it’s a message of hope and encouragement…God is on our side, and we can overcome.”[iv]  While our churches may not choose to express the gospel message in exactly the way, again, if we are willing to be honest, that is not too far off from what comes out of our pulpits most weeks.

From Osteen’s perspective, this emphasis on hope does not equate a prosperity message.  “I’m not a prosperity preacher” he said to Larry King in a 2006 interview. “That’s something I kind of get tagged with that I don’t even like.”  Instead, Osteen seems himself above all as practical and so chooses not to be exegetical or highly theological in his preaching: “I know doctrine is good.  We need doctrine, but I think the average person is not looking for doctrine…Most of what I preach is about the simple things”[v]

One consideration to make when understanding Joel Osteen is that there may be elements of the Osteenian gospel proclamation that are contextual.  Just as it is readily accepted that the gospel and church forms look a bit different in Africa, Asia, and the Middle East, perhaps some leeway should be allowed among a demographic of folks who are living a life that is fairly different from ours.

Helpful questions at this point might be ‘Why does the language of victory and blessing resonate so well with the poor?  What are the felt needs of the congregants at Lakewood and how does the gospel address those needs?  Is a more appropriate focus in this context for gospel proclamation one that emphasizes the positive elements of the gospel, perhaps because the sin and repentance elements are already so obvious?

3. I believe the Spirit is at work in Osteen’s ministry.

Having spent considerable time with people who are not from the easier locales of life, I have always been struck by how ready many of these people are to receive the Good News.  While people with bright futures and stable lives have a sense of self-sufficiency, those in the throes of life can’t stomach that illusion.  The result is that these people are some of the most ready for a message of hope and consequently these are largely the people who are walking through the doors of Lakewood Church.

If the Spirit is already at work in those lives, maybe there is a better approach than pointing out the obvious shortcomings of Joel Osteen.  If these people in delicate places are looking for real spiritual food, perhaps considering how we can supplement their diet is a better answer to their spiritual malnutrition.  We need to do some soul searching.  Why are we demonizing Joel Osteen?  Could there be a sense of envy within us as we neglect to see our planky shortcomings while looking for every single one of Osteen’s splinters?

Ultimately, I too want to be more practical, there is a lot to learn from Joel Osteen.  How can I do  ministry more like he does it, of course not with the same theological expression, but in effectively engaging a group of people who, I have no doubt, represent some of the whitest fields in this world.

If such an opportunity for ministry sounds intriguing, perhaps even a refreshing change from than the frequent stench of airs in white upper middle class suburbia, maybe we should consider how our churches might do something more Osteenian.  It just might be some of our best ministry now.

[ii] Carlin, Nathan and Miller, Christine.  Joel Osteen as Cultural Selfobject: Meeting the Needs of the Group Self and Its Inidividual Members in and from the Largest Church in America. Springer Science and Business Media, LLC. 2009.

[iii] ‘What We Believe.’  Retrieved on June 19, 2013 from http://www.lakewoodchurch.com/Pages/new-here/What-We-Believe.aspx.