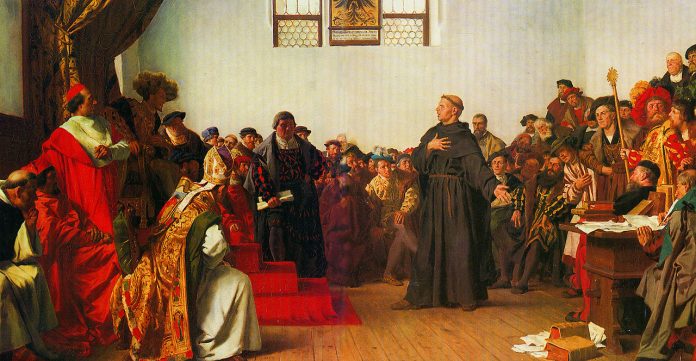 Reformation Day is celebrated annually on October 31st, the day that Martin Luther famously nailed his 95 Theses to the door of Castle Church at Wittenberg in 1517. His original disputes chronicled the abuse of power and the selling of indulgences. Over the course of several years his convictions matured into what would be a full-fledged call to renewal and a break with the church centered at Rome, which he considered corrupt beyond repair.

500 years later, churches in the Protestant tradition remember the people and movements that sparked renewal in both doctrine and piety. Four major groups emerged from this movement: Lutherans, Reformed, Anabaptist, and Anglican.

Today, some theologians continue to disagree on key questions such as:

Regardless of how one answers these questions, it is undeniable that what happened 500  years ago was the biggest upheaval in Western church history. At its core, the Reformation provided the break with the status quo needed to reorient the church to the gospel and its God. The results were remarkable, warts and all. Not all events during the Reformation are praiseworthy, nor were its leaders always models of Christian character. For example, a group of reformers, derisively called “Anabaptists,” were persecuted and martyred by their fellow reformers. The Thirty Years’ War was a bloody display of political conflict and exploitation under the guise of religion. Even antisemitism saw a renewed vibrancy during the Reformation. These matters must not be glossed over.

Nonetheless, the Reformation’s core ideas were potent and fueled the spiritual renewal of consequent generations. Below are ten such consequences, highlighting some of the theological and cultural fruit born out of the protests of these movements. Granted, these are simplifications of complex historical-theological matters. A number of them are in fact contested. However, they are stated as basic expressions of the spirit and hopes of the reformers. More can be explored by following some of the sources listed below.

1. The Protestant Reformation relocated spiritual and theological authority to Scripture.

In 14th century England, John Wycliffe challenged medieval practices such as absolution, pilgrimages, indulgences, and the doctrine of transubstantiation—the belief that bread and wine become Christ’s physical body and blood. He did this by appealing to Scripture: “Neither the testimony of Augustine nor Jerome nor any other saint should be accepted except in so far as it was based upon Scripture,” Wycliffe claimed. Later, at the Diet of Worms, Luther famously stated at the debate, “I am bound by the Scriptures I have quoted and my conscience is captive to the Word of God.” As these proclamations signal, the Reformers were appealing to the revelation of God as the final arbiter of truth, against the claim of papal infallibility from Rome and the abuse of tradition insofar as it conflicted with biblical teaching. (see this article by Mark Noll on the promise and problem with sola scriptura; see also the Reforming Catholic Confession, signed by 1000+ representatives of “Mere Protestants.”)

Luther, Ulrich Zwingli, and others, drawing especially on Augustine, began to see grace as the doctrine by which all others should be tested. Every dimension of salvation depended exclusively on God’s grace. This was in contrast to the late medieval edifice of penitential deeds that could be performed in order to absolve a person from sin or shorten their time (or their deceased family members’ time!) spent in purgatory. This distortion of Christian teaching, popularly called salvation by works, culminated in jingles that could be heard on town streets intended to stir lay people to action: “As soon as the coin in the coffer rings, the soul from purgatory springs.” Another one was: “Place your penny on the drum, the pearly gates open and in strolls mum.” A purgatory industry was set up to exchange monetary gifts for forgiveness. In sharp contrast, and in critical relief, the reformers taught that Christ’s work, when joined to faith, would justify a person (meaning, to forgive them).

Watch: “The Five Solas of the Protestant Reformation” by Kenneth Collins

3. The Protestant Reformation made liturgy and church services accessible to lay people.

For centuries worship was performed exclusively in Latin across Western Europe, in spite of its knowledge being limited to clergy and cultural elites. Some clergy themselves knew the language poorly, and thus recited the mass inaccurately and rather flippantly. Furthermore, while the Eucharistic bread was given to everyone present, the wine was limited to the clergy, as it was considered to be worthy of more reverence than the bread. Against these practices, the Reformation began to translate the Mass into local languages. Many leaders also stopped wearing special vestments that distinguished clergy from lay people. Finally, both bread and wine were once again shared with everyone eager to participate in the Mass. These measures helped lay people move from passive to active participants in worship.

Scott Kisker has cleverly pointed out that the Protestant Reformation was really a church split over a controversial building project. In a sense, it’s true—St. Peter’s basilica in Rome was being funded by the exploitative selling of indulgences. But the list of faults in late medieval church leadership goes further. Pontiffs (the official term for the office of pope) hired mercenaries to serve as standing armies. Bishops of the church were simultaneously serving as dukes and oversaw multiple sees in order to draw in more money. Some monasteries were turned into lavish grounds to house illegitimate children of the noble class. The centuries leading up to the Reformation exposed the profound corruption at work when church leadership is seduced by wealth and power. This context must be kept in mind when reformers leveled harsh criticisms, such as the title Antichrist, at church leaders.

Watch: “Why the Church Needed the Protestant Reformation” by Scott Kisker

5. The Protestant Reformation affirmed the immediacy of God’s presence through the mediation of Christ.

For centuries lay people were taught that the holiness of Christ made him unapproachable. Between Jesus and everyday people, therefore, must stand a host of other mediators, including intercessory saints and priests. This led to several unhealthy practices, including penitential pilgrimages, the use of relics as talisman, and the cult of saints. Against this, the reformers affirmed the biblical teaching of the “priesthood of all believers,” (which was not only a privilege, but also carried spiritual and moral obligations) and the mediation of Jesus Christ between the Father and humanity.

6. The Protestant Reformation afforded women leadership and influence in the church.

The Anabaptist tradition, also known as the Radical Reformation, emphasized the role and calling of the Holy Spirit on the life of the believer, and therefore welcomed women as ministers, including in preaching roles. Leaders such as Agnes Linck, Ursula of Essen, and Maria of Monjou were persecuted and even martyred for their roles in their faith communities. While the majority of the Protestant Reformation continued to limit women’s leadership, some streams laid the groundwork for gift-based rather than gender-based roles.

7. The Protestant Reformation made the Bible accessible to lay people.

Until the Reformation, the only Bible readily available to the Western church was the Latin Vulgate. Not only was this restricting, but this version included several translation errors that perpetuated unhealthy beliefs. For example, in Matthew 4:17, Jesus is translated as saying, “do penance” instead of “repent.” The implications are obvious. That began to change when Wycliffe translated the Bible into the vernacular in the 15th century. Following his example, Martin Luther translated the New Testament into German. William Tyndale, inspired by Luther’s work, then translated the Bible into English—the first to purportedly do so using the original Hebrew and Greek. This was congruent with the Reformers’ insistence on the authority of Scripture for matters of faith and practice, and the need for individuals to feast on the Word of God for spiritual nourishment. This was Luther’s dream—that people “might seize and taste the clear, pure Word of God itself and hold to it.”

8. The Protestant Reformation helped propel the spread of literacy across the continent.

The Protestant Reformation helped propel the spread of literacy, since one of its primary emphases was personal piety based on the appropriation of Scripture. Furthermore, Protestants made use of catechisms for children, which encouraged reading. In Germany, literacy rates ranged between only 5-30% before the Reformation (source). That rate quickly rose thereafter, since Protestants were “people of the book.” Luther’s decision to publish in German, instead of the traditional scholarly Latin language, also made the message of the Reformation accessible to the hearts and minds of everyday people.

9. The Protestant Reformation reconfigured the church-state relationship away from Christendom.

In 1534, English Parliament passed the English Act of Supremacy, which made King Henry VIII head of the English church. On the surface this solidified the church-state relationship. In reality, it broke England’s ties to Rome as a religious-political power and moved to secularize the state. Once Protestant princes throughout Germany broke with Rome (and the Holy Roman Empire), they also felt empowered to carve their own paths to power, independent of religious authorities. One of these paths was the Parliament system, which came to legitimize rulers. This church-state break was expressed formally in Luther’s “two kingdoms” theology; God established the kingdom of believers which must operate under the gospel, and the kingdom of the state, which must operate under the law. Of course, this distinction remained difficult to maintain even for Luther, who ultimately supported the state’s enforcement of Christian orthodoxy.

10. The Protestant Reformation caused the Roman Catholic Church to initiate its own reform.

Referred to as the Counter-Reformation, those inside the traditional structures of the church responded to the Protestant movement by attempting to reform itself. There were many pious groups who identified with Rome yet nonetheless knew something was wrong with the life of the church. The Council of Trent (1545-1563) was one such reactionary meeting, and other efforts to correct abuses, clarify Catholic doctrine, renew the spirituality of its societies, properly train its priests, beautify its liturgy and art, and spread the Christian faith were all attempts to re-order the church to be true to itself and to God. New religious orders such as the Society of Jesus (Jesuits) were founded to help carry these out.

Works consulted:
The Reformation: A History by Diarmaid MacCulloch
Church History in Plain Language by Bruce Shelley
The Story of Christianity, Vol. 2: The Reformation to the Present Day by Justo L. Gonzalez
The Unquenchable Flame by Michael Reeves