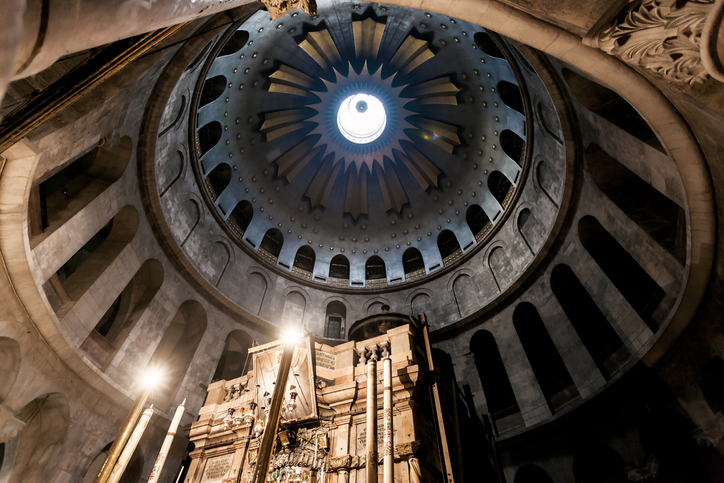 Last week, the shrine that houses the traditional site of Jesus’ burial was worked on for conservation efforts, and his alleged tomb site opened for the first time in centuries.

1. The Church of Holy Sepulcher (or “Church of the Resurrection”) in Jerusalem, which is shared primarily by three groups—Greek Orthodox, Armenian Orthodox and Roman Catholic—is believed by many to contain the tomb of Jesus and the mount of Calvary (the Coptic, Ethiopian Orthodox, and Syriac communities also have access). The original church itself was built by the Emperor Constantine around 335 AD, though it has undergone many reconstructions due to fire damage and political conquests, including entire devastation at the hands of the Fatimids in 1009.

2. The 4th century church historian Eusebius writes that the site where Constantine built the first church originally housed a temple built by the Roman emperor Hadrian some 200 years earlier, which was purposefully set there as a polemical act against the Christian holy site (Book III, Chapter XXVI).

3. Only one other site has laid serious claim to the tomb of Jesus—the Garden Tomb. It is regarded as authentic by virtually no scholars, and its claim to historicity goes back less than two hundred years (source). It is probably an 8th-7th century BC burial site, and its claim to be Jesus’ tomb is likely motivated by denominational-religious reasons, since Protestants do not have access to the tomb at the Church of the Holy Sepulcher.

4. Jewish law required that a person be crucified and buried outside of the city’s walls (Leviticus 24:14; Hebrews 13:12), which the traditional site fits. King Agrippa I expanded the city walls sometime between 41-44 AD, which puts the tomb within Jerusalem’s “old city” walls, but originally it would have been outside of the city since Jesus was buried around 30 AD.

5. Since at least 1555, if not earlier, the tomb inside the Church of Holy Sepulcher was sealed with heavy marble in order to prevent pilgrims from removing bits from the burial space as relics. The small shrine that houses the tomb is called the Edicule.

7. This year on Wednesday, October 26, a team of scientists, a photographer, and a handful of clerics saw inside the tomb for the first time since possibly 1555. The project is a conservation effort to restore its condition, and the tomb was only open for 60 hours. View some of the photographs here.