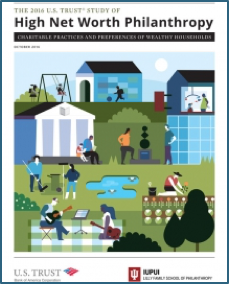 Recently, U.S. Trust released its 2016 Study of High Net Worth Philanthropy analyzing the giving patterns, priorities, and attitudes of America’s wealthiest households.1 The sixth in a series of biennial studies, it was researched and written by our colleagues at the Indiana University Lilly Family School of Philanthropy. Within the study, high net worth households are defined as those with a net worth of $1 million or more (excluding the value of their primary home) and/or an annual income of $200,000 or more.

I offer four takeaways from this article for nonprofit and religious leaders wanting to effectively work with high net worth donors.

Takeaway #1: While the percentage of those giving to religion may be declining as affiliation and attendance patterns change, it remains at or near the top in most other measures. 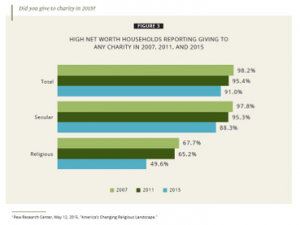 First, they give at much higher percentages to secular causes than the general population (88.3% compared to 49.7%). Even so, their religious giving (narrowly defined as predominantly religious congregations, denominations, and missionary societies) still outpaced the general population (49.6% to 36.4%). Across the board in recent years, the percentage of HNW households that give has decreased slightly, but giving to religion has decreased in greater numbers. The study’s authors believe that their ability to include younger and more diverse HNW households in this survey help explain slightly lower levels of giving. Younger donors might help explain the decrease in religious giving as higher percentages of pre-boomers are religiously unaffiliated. Across all generations, however, we know that religious affiliation and attendance (often the strongest markers for religious giving) have declined, and may partially explain the decrease in religious giving. 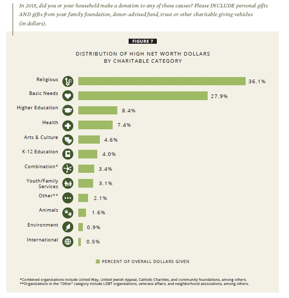 Yet despite the decrease in the percentages of HNW households giving to religion, it remains second only to basic necessities as the most common recipient of reported giving. With many other faith-based charities categorized in other sectors (such as health, education, or youth/family services), it is clear that religious giving remains significant. In fact, while almost half of all HNW households reported giving to religion, it made up the largest distribution of HNW dollars given (36.1%). While a few large gifts can skew this percentage in any given year, religion’s place at the top demonstrates that of those that give, their religious giving plays a central role in their giving portfolio.

Takeaway #2: The more a donor knows, the more they give and feel fulfilled, but they often rely on the nonprofit to communicate. It is even more essential for our nonprofits to be clear about their mission, as well as demonstrate impact and deepen relationships with donors.

When asked about their motivations for giving, HNW donors overwhelming claim they give:

Takeaway #3: Personal values are central to individuals’ giving, but they are often left unexplored by individuals and their larger families. A nonprofit’s ability to build meaningful relationships, encourage donors to discern how their giving reflects their values, and develop these conversations throughout the family is key to their fundraising success and may allow you to distinguish your nonprofit from many others.

While testing motivations on why they give, the survey also asked HNW donors how they chose the cause or organizations to support. A majority of HNW individuals (75.8%) pinpointed their personal values as central – higher than their interest in the issue area (64.2%) or even firsthand experience with the organization (55.1%). Donors do claim a personal relationship with someone in the organization as key, but how these individuals discern their values, or how they discern how organizations align with these values, is not explored. In a fascinating set of questions, the latest U.S. Trust report demonstrates that most HNW donors have not linked their giving with their family and family traditions. Many lamented their lack of connection between their family and their philanthropy.

Takeaway #4: Religious giving may be declining among younger generations as institutions evolve, but religious nonprofits should look to their assets: 1) engaging donors around discerning their values; 2) highlighting impact around issues over focusing on organizations; 3) encouraging donors of all ages to engage personally in the work at hand.

While there are numerous other takeways to highlight, we will only note one more about the future of HNW household giving. Younger HNW donors were most likely to say that they would increase their giving over the next few years. They responded that they were more interested in issues over organizations. At the same time, they claimed to find more fulfillment in their giving and volunteering than older generations, and they were more successful in engaging their families in giving practices and traditions.

Focusing on motivation and meaning, communicating clarity of mission, and demonstrating real impact may be the best lessons that religious nonprofits can learn from trends in HNW household giving.