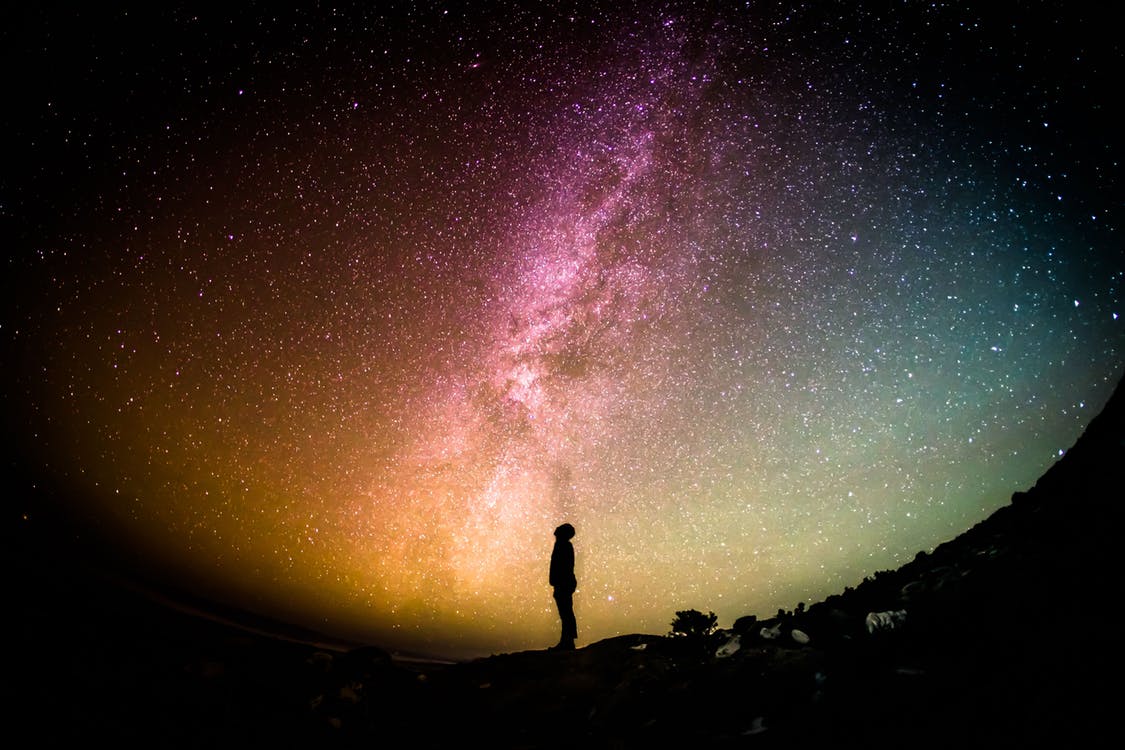 As a pastor or other kind of spiritual leader, you’ve supported people in the midst of testing their faith. Perhaps it was a high school student beginning to test the value of faith against the value of cynical friends who did not share the faith. Or perhaps it was a college student doubting the content of the faith in a new environment of critical scholarship and learning. Perhaps it was a person in the midst of crisis or fallout, wondering if their faith will provide resources and comfort in this most desperate time. We expect testing to come in these forms and at these times.

To this list, I have noticed more people testing their faith over social media. People who are seemingly out of the typical testing years or who are not in critical situations, people who ought to be investing in the faith of others are testing their faith. People who have been in church for long periods of time and who have even been in leadership can test their faith behind the safety of a keyboard or at the speed of swiping on a smartphone. Online communities are transforming how people join and distance themselves from communities, including faith communities. Moreover, online communities are not neutral. Formation happens in community. Even with it is not intentional, formation is happening. A collection of Facebook friends and Twitter followers will influence how one thinks.

Faith testing is a necessary and important time in a person’s faith development and online settings have provided new contexts for it to take place. Thus, since rules of faith engagement are changing, spiritual leaders must begin to change their strategy for how they support people in the midst of faith testing. Let me address this ongoing challenge of supporting people in faith testing, specifically in light of online networks and communities, and offer some suggestions for faithful support.

Let’s begin with some facts about faith-testing:

2. People who have not gone through a process of testing or have not been part of a community that facilitated questioning may go through this testing phase later in their spiritual journey.

In other words, testing the content of one’s beliefs is not limited to those in age ranges typically thought of as adolescents or young adult, but may include people in their 30s and 40s (and older).

First, a person is testing the content of faith: Do I really hold these values, expectations, and beliefs? Are these values, expectations, and beliefs true and of significance?  Second, a person is testing the community of faith. They are asking, “Is it OK for me to test my faith? Can I still belong  to this community while I’m not sure I believe?”

A person is seeking independence and acceptance at the same time. The faith tester wants to know that someone else believes, values, and identifies with the new beliefs they are now “trying on” (acceptance) and that the faith tester is thinking new thoughts that are original and genuine and set apart from their faith community (independence). This can be a very difficult experience for the faith community because people can feel rejected, dishonored, and unvalued by the faith tester. The testing person may even be excited and have a sense of refreshment that is confusing to those who have been their supporters along their journey of faith.

These four observations make online communities prevalent in the faith testing experience. Why? Because online communities, which are not neutral, are used to test both the content of new thoughts and beliefs (or the validity of previously held ones) and the acceptability of testing thoughts and beliefs. Given the breadth of a person’s online connections, a person will always find this double acceptance: Someone will affirm the new content of their beliefs (or reject the validity of previously held beliefs that are held out for inspection) and someone will affirm the act of testing. The mishmash of friendships on social media creates a virtual certainty of dual acceptance. When this dual acceptance is combined with the tireless algorithms of Facebook and Twitter, then one’s online community starts to become increasingly formational. The faith tester is surrounded by an accepting community that affirms their new beliefs or rejects the beliefs being tested.

In the face of such widespread formation, we take heart that God has provided pastors, the church, and his Holy Spirit. In the midst of these dual, seemingly conflicting desires, I have found it helpful to remember that because a person is questioning their beliefs does not mean that they do not believe them and that just because a person is trying out new thoughts doesn’t mean they will orient their life around them. Neither does testing the content of faith mean that a person does not want to be part of their faith community. Faith testers want both independence and acceptance in both thought and action; indeed, this is the only way that a person can legitimately claim a faith as their own.

So, how can a spiritual leader respond to this testing of faith?

1. Affirm the testing of faith.

Testing of faith is a natural part of ownership. Just because a person’s faith is found wanting doesn’t mean that the faith is found wanting. It means they didn’t hold the true faith. Testing faith can lead to deepened faith. Deepen and sharpen your own beliefs and values. You never know when you will be called upon to give a thoughtful answer to a question that has been ruminating in the faith tester’s mind.

2. Be proactive in communicating.

When a person is looking for community, silence is deadly. Recall that the faith tester is wondering if their testing will disqualify them from friendship and support. When there is silence, it is often taken as rejection, an isolation, and disapproval of faith testing. So, let people know that you know about their faith testing and affirm the action. Offer gentle responses and more robust resources in light of their questions or statements. Presume that God wants a person’s faith to deepen when they are testing it and act accordingly.

Is it possible, even likely that the faith tester will have some errant thoughts that need correcting? Of course. But remember that this is a process of them owning their faith, not building its initial content. More is to be gained and less to be lost by conversing with the faith tester than by sending them online articles. It is easy to slap down a link and let someone else do the hard work of discipleship. Don’t do it. Converse with the faith tester. Not every conversation needs to be heavy, intense, and life-changing. The faith tester most likely needs multiple conversations and opportunities to raise heavy, intense, and life changing questions and comments.

The tension, of course, is that spiritual leaders and faith communities must always be accepting and affirming of the act of testing, while they must also reaffirm the content of historic faith, which is often the content being tested. The doctrines and dogma the historic Christian faith do not change dramatically with every questioning generation or individual. The faith is ours to appropriate, not to assimilate. So, while some may be testing doctrine/dogma, it is vital to make sure they know the act of testing is accepted and even encouraged.

4. Faithful shepherding and pastoral care is no guarantee that testing will end with deepened faith.

At this point, it is important to remember that Jesus often lost people at points of deeper commitment. Sometimes testing the faith results in a person counting the cost and realizing it is too high. The faith tester’s response to the content of the Christian faith is not the responsibility of the pastor. The pastor’s responsibility is to affirm acceptance of the act of testing and good faith in the journey. Let me diagram the intersection of accepting the testing of faith while affirming its historic content.

This diagram reveals the four potential outcomes of faith testing. 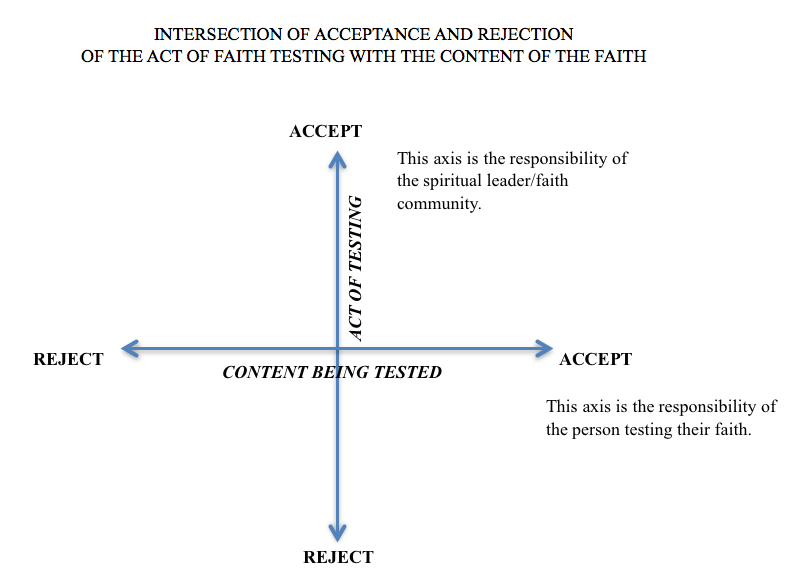 A person may reject the content of their faith, while the faith community/spiritual leader rejects the act of testing. The result is isolation. There is little chance of recommitment, at least to the same faith community. (Bottom left quadrant)

A person may accept the content of their faith, while the faith community rejects the act of questioning. The result is either a broken relationship or a shallow faith. A person whose community rejects the act of testing might remain with the faith without testing their faith, holding a shallow faith that is not suitably tested.  A person may also seek out a new faith community that is more critical and rigorous in its faith and affirming of the act of questioning. (Bottom right quadrant)

A person may reject the content of their faith, while the faith community/spiritual leader accepts the act of questioning. This affirmation leaves open the possibility of return, while simultaneously affirming the healthiness of questioning a faith. A person may sense the support that is needed to grow deeper. Sometimes a testing of faith is experienced by the tester as a loss of faith, whereas a secure and mature faith community and spiritual leader know that it is the process of deepening the faith. (Upper left quadrant)

Finally, a faith tester may come to reaffirm their faith in a safe environment provided by the spiritual leader and faith community. In this case, the result is deep community and deep faith.

Online communities create a variety of environments where a person can test their faith, finding a community who will agree and support new ideas or beliefs while also providing a certain distance from their faith community. While the environments in which faith can be tested have increased, pastors and faith communities still affirm the act of testing one’s faith to make it their own. Pastors and leaders can help faith testing by affirming the act of testing, maintaining a thoughtful faith, and conversing in the midst of testing. After several years in pastoral ministry, I am always delighted to look back on those who entered seasons of doubt and emerged stronger in the faith and more deeply rooted in their community, yet, by God’s grace, I am also hopeful for a return of those who left the faith, believing it to be just for a season, who will find their faith community just as accepting, yet grounded, as when they left.