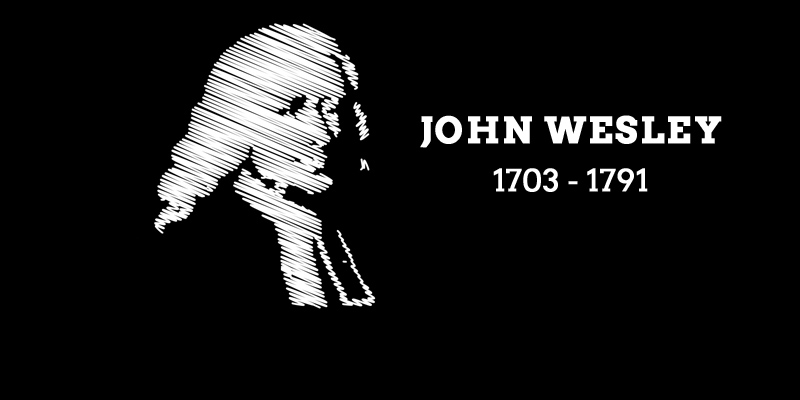 John Wesley was born in 1703 at Epworth, England, to parents Samuel and Susanna Wesley. His father was rector in the Church of England and his mother a parent to John’s nine other siblings, including renown hymn writer and minister Charles. John Wesley lived during a century when Deism—the idea that God is far-removed from and uninvolved in his creation—was rising in the academy and the life of the Church. It was in this climate that John Wesley’s call and ministry came to fruition, and in which the First Great Awakening answered many needs of the culture.

The shape of John Wesley’s call and ministry was profoundly impacted by his upbringing, including his mother’s rigorous approach to raising children. The spiritual heritage of Puritanism, with its emphasis on discipline and personal religious affections, and of Anglicanism, with its sacramental orientation, shaped Wesley originally through his parents. Then, early in life, one event in particular marked his sense of calling to vocational ministry—the saving of his life from a fire at the Epworth rectory in 1709. After this experience, he was regarded by many as providentially set apart for God, and Wesley often referred to himself as a “brand plucked from the fire.”

His education as a young boy continued at Charterhouse School in London, where Wesley wrestled with the meaning of Christian faith and with his own assurance of salvation. From there he moved on to Oxford in 1720 where he continued his studies, and by 1728 became a teaching fellow and priest. It was during his life as a young man that Wesley came to understand Christianity as a spiritual religion, not simply a moral one. Reading Thomas a Kempis’ The Imitation of Christ helped him understand faith as both fides (belief) and fiducia (a personal, hearty trust). William Law’s Christian Perfection and Serious Call to a Devout and Holy Life were also influential on John Wesley’s early life.

The Birth of Methodism

The Methodist movement was birthed during John Wesley’s time at Oxford. His brother Charles Wesley catalyzed a group which took vows to lead holy lives; praying daily, taking communion weekly, and ministering to prisoners. This movement of committed discipleship eventually spread outward, but it was the practice of putting converts into class meetings that contributed to its longevity. It was this methodical approach to the life spiritual life which earned them their name “Methodists.”

In 1735 John Wesley left for America as a missionary. On the journey, he encountered a group of Moravians who calmly sang hymns during a stormy night at sea. Here Wesley was confronted his fear of death. Though an ordained minister, he was not ready to meet God. Still he carried on in ministry in Georgia. Soon after he met Moravian pastor August Spangenberg, from whom he perceived there was something yet deficient in his own spirituality. Reflecting on his ministry experience, Wesley asked, “I went to America to convert the Indians; but oh who shall convert me?”

Wesley believed that his time in Georgia was not effective, so he sailed back to England. Upon his return, he met Peter Bohler, another Moravian who helped him understand Christianity as essentially a relational, heart religion. Still, he continued to feel unsettled about his personal faith until 1738, when he finally understood salvation solely as a work of grace from God. This happened at Aldersgate in London, during the reading of Martin Luther’s preface to Romans at a meeting he attended. This is often referred to as his “Aldersgate experience” and his “evangelical conversion.” Here John Wesley received the assurance of his personal salvation and freedom from the power of sin. Salvation, for John Wesley, now meant experiencing holy love of God and people, perfected by the grace afforded by Jesus Christ. Later that year he preached his evangelical manifesto, “Salvation by Faith.”

The Beginning of Revival

Wesley began open air preaching in 1739 under the influence of George Whitefield, a Calvinist preacher, friend, and original member of the Methodist club. Field preaching was not an accepted form of ministry at the time, but Wesley’s fresh message of “Real Christianity”—salvation by faith—put him out of favor with the Church of England and effectively banished him from preaching in church buildings. However, the country was ripe for revival and it was open-air preaching that made the gospel accessible to thousands of people. The 18th century was one of the most degenerate eras of England’s history, and the Church had lost touch with the basic needs of people—spiritually, culturally, and materially.

Together with his brother Charles Wesley, George Whitefield, and other traveling preachers, John Wesley ministered to people in industrial cities like Bristol as an itinerant minister. People confessed their sins and turned to God by the thousands; by now, the Methodist movement was afoot. His strategy for continued discipleship within this Great Awakening included the implementation of three-tiered meetings called Select Societies, Class Meetings, and Band Meetings. John Wesley married Mary Vazeille in 1751. Their marriage was marked by challenges and considered by many to be a practical failure, as Wesley’s demanding schedule and their inflexible temperaments combined for a difficult family life.

In the decades spanning Wesley’s ministry, he was often subjected to mob violence and repeated illness, but that did not stop him from traveling over 4,000 miles every year, preaching the message of salvation—which for Wesley was intended to end in entire sanctification—through some 40,000 sermons during his lifetime. His scriptural convictions led him to be a timely voice for abolition, which was congruent with his coming to understand the Christian faith as essentially relational. There were 70,000 Methodist Christians when he died at age 87 in 1791.