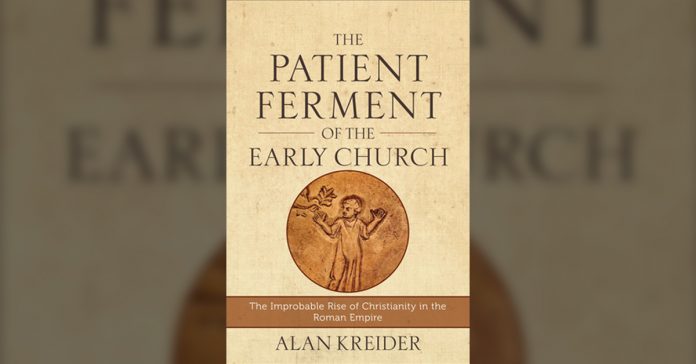 The most important book of 2016 is The Patient Ferment of the Early Church: The Improbable Rise of Christianity in the Roman Empire, by Alan Kreider (Baker Academic, 2016, 321 pp.).

I say this after considerable thought—after reading the book carefully and after having heard Alan speak and introduce the book at the ESJ School Missiology Seminar at Asbury Seminary last spring.

When I say “most important,” I mean much more significant and relevant than the many useful “missional church” or “missio” books and blogs that continue to flow forth. 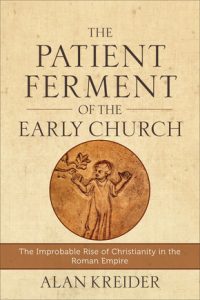 The significance of The Patient Ferment of the Early Church is that it shows us (better than any other book) what the early church really was, what it was up to, and what it was up against. Kreider traces the rise of Christianity in the Roman Empire and astutely explains its dynamics in historical, sociological-anthropological, and practical discipleship terms. He gives considerable attention to the actual sociology of the early church, including the key roles of women and common folks. His last two chapters—on Constantine and Augustine—drive home the main lessons of the earlier chapters.

Here are five things I especially like about the book:

Kreider makes remarkably extensive use of both primary and secondary sources. Key figures such as Cyprian, Irenaeus, Tertullian, Origen, Pachomius, and Lactantius figure prominently. So do the myriad common people whose names we don’t know but who made up the on-the-ground and in-the-cities life of the Christian community.

Kreider shows that “the early church” was not one, but many. This is a positive, not a negative. The church was constantly changing over time. It took on varying modes in different places. Culture was always a factor. With multiple examples, Kreider details how the church was always adapting to culture, inculturating mostly in positive but also sometimes in negative ways. His extensive discussion of the kiss of peace is fascinating in this regard.

The church had its remarkable impact not through strategy or programs or even extensive evangelism or writing, but through the Christ-like quality of its community life. Kreider repeats more than once Cyprian’s aphorism, “We do not speak great things but we live them.”

“Unlike many churches today,” Kreider writes, churches in the early centuries “did not try to grow by making people feel welcome and included. Civic paganism did that. In contrast, the churches were hard to enter. They didn’t grow because of their cultural accessibility; they grew because they required commitment to an unpopular God who didn’t require people to perform cultic acts correctly but instead equipped them to live in a way that was richly unconventional.” The early church’s witness “was a product not of what Christians said but of how they lived” (149). Kreider is here referring specifically to the early document called Apostolic Tradition, but the point applies more generally. The Christian movement grew patiently “because of the intriguing wholesomeness of its life” and community—not by evangelistic efforts or missional strategies other than embodied witness and catechesis (169). The church itself was mission.

One of the pleasant surprises (to me) in the book is now consistently and insistently the church in its first three centuries kept pointing to Jesus Christ and especially to the Sermon on the Mount. Another surprise was how important Isaiah 2 and Micah 4 continued to be, with their promise of the Messiah and the day when the Lord “shall judge among the nations, and shall rebuke many peoples; they shall beat their swords into ploughshares, and their spears into pruning-hooks. Nation shall not lift up sword against nation, neither shall they learn war anymore” (quoted, pp. 91-92). Origen said this text (that is, Isa. 2:2-4; Micah 4:1-4) “is one that all believers knew.”

How did they learn it? Catechesis.

This is the unifying theme throughout the book. The essential point: Catechesis was not in the first instance about doctrine, but about daily living, way of life. Here Kreider’s theme of “patient ferment” comes into play.

Early-church catechesis, once it developed systematically in the second century, often took up to three years. “Given the magnitude of the issues with which catechists and students were struggling, thee years wasn’t a long period of time,” Kreider notes. “The issues of teaching and character formation that the catechists and catechumens dealt with must have taken considerable time simply to talk about. It would take far more time for them to be lived—to become habitual, second nature, embodied in the habitus of the apprentices becoming Christians.” Although there was “no general three-year catechumenate” in the early church, Kreider says, three years was not uncommon (177).

Most catechumens persevered and were fully formed. Some however dropped out along the way. This was good—a safeguard against diluting Christian discipleship.

Patient ferment and habitus are two interrelated themes here. Kreider uses the sociological concept habitus to mean the incarnation of the gospel into people’s whole being—mind, emotions, body. “It is habitus that constitutes our profoundest sense of identity; that forms our deepest convictions, allegiances, and repulsions; and that shapes our response to ultimate questions—what will we life for, die for, and kill (or not kill) for” (40). And importantly: People’s habitus can be changed, re-formed. This is what early church community and catechesis in fact did.

Christian mission, then, was not intentional outreach but the result of intentional formation. Christians weren’t mainly activists. They were patient, allowing the ferment, the leaven, of the gospel to change the world, assured that God is sovereign and his Spirit is working. In his second chapter, “The Good of Patience,” Kreider points out that Justin, Clement of Alexandria, Origen, Tertullian, Cyprian, and Lactantius all wrote about patience. Yet these writings are largely ignored today. They are crucially important, Kreider believes, for understanding how early Christians understood gospel, church, and mission.

Augustine (post-Constantine) comes off relatively negatively here: The key figure who gave theological rationalization to the church’s use of state power to enforce orthodoxy. Kreider maintains that Augustine drove a wedge between inner disposition and outward action—directly contradicting, in effect, Jesus’ teachings in the Sermon on the Mount. This of course required a reinterpretation, a spiritualizing, of the Sermon on the Mount. It also opened the door to split-level discipleship: “Counsels of perfection” for the spiritually elite; compromise with culture’s values and practices for most Christians (262, 292).

Augustine “knew he was innovating,” Kreider says (289), and in ways we rightly question today. In perhaps the book’s biggest understatement, Kreider says, “The implications of this [shift from action to intention] for the history of mission are weighty” (291).

An obvious key point for today: In each age and cultural setting the church must decide how long and how rigorous a process of conversion/discipleship/catechizing is necessary to form real Christians who can stand and walk steadfastly for Jesus Christ and have a greater impact on surrounding society than it has on them.

I end by briefly comparing Kreider’s Patient Ferment with one of the more significant recent books on church, mission, and discipleship: Alan Hirsch, The Forgotten Ways: Reactivating Apostolic Movements (second edition, with revised subtitle; Brazos Press, 2016). Hirsch synthesizes and applies the best current thinking on the church as movement. Set it next to Kreider’s Patient Ferment, and what do we find?

Hirsch’s insightful book helps explain the church as “apostolic movement.” However it underplays the crucial unprogrammable role of simple daily Christian living empowered by the Holy Spirit. Kreider’s book takes us back to the beginning and shows how early Jesus followers put Christian discipleship into practice in daily living, relying on the Spirit—Jesus-centered, but without theory or strategy or the pondering of “paradigms.”

These two books can usefully be read together. But Kreider’s Patient Ferment is far more significant than anything else I’ve seen in recent years.

Here we are in 2016, nearing 2017. Will today’s church (especially in the West) finally rediscover what it means to make disciples, not just adherents and church members? To form communities of Jesus followers where the streams of influence flow more from the church into the culture than from the culture into the church?