Why Is There a Pink Candle in the Advent Wreath? - Seedbed
close
Menu 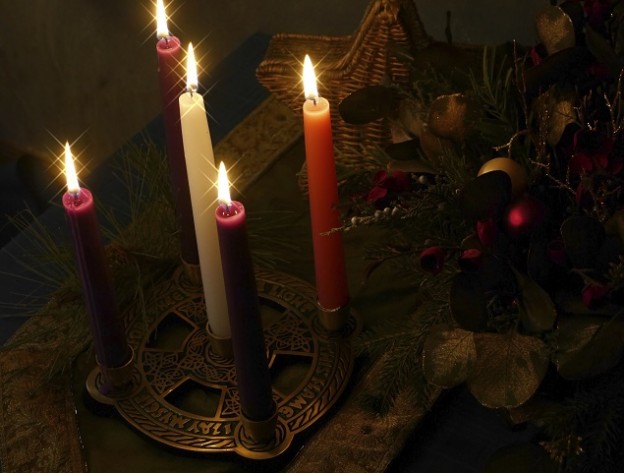 For those familiar with the liturgical calendar, the four weeks prior to Christmas are known as the season of Advent. A common practice in churches and homes during Advent is the progressive lighting of four candles – one per week, three purple and one pink – as a symbol of expectation for God’s presence on earth. On the first, second, and fourth Sundays in Advent, a purple candle is lit. On the third Sunday, (yes, on the third Sunday), a pink candle is lit.

In hopes of clarifying confusion about the pink candle, and to help restore liturgical purpose and meaning to the practice, the paragraphs below briefly examine the history of Advent.

Epiphany to Advent
Before looking at the pink candle, some background information on the historical development of the season of Advent is needed. However, to understand Advent, the seasons of Epiphany, Lent, and Easter must first be considered.

Worship in the ancient church was an event-oriented gathering. The ancient church believed that by commemorating events of Christ’s life within space and time, the power of the commemorated event was made real and present to the worshiping community. In particular, worship allowed the worshiper to experience the life, death, and resurrection of Jesus Christ. Thus, the events of Epiphany and Easter became focal points for worship in the ancient church due to the importance of the Christ-events they represented (i.e. presented again).* Epiphany (which means “manifestation”) commemorated Jesus Christ’s incarnation and revelation to both Jews and Gentiles as the Savior of the world. Easter commemorated victory over sin and death through Jesus Christ’s resurrection from the dead.

As the highest feast days of the liturgical year, Epiphany and Easter were marvelous celebrations of worship rejoicing in life and salvation through Jesus Christ. The celebratory focus of Epiphany and Easter led to their being chosen as the dates when new Christians were baptized and fully accepted into the church. Since the ancient church understood baptism as the mark of a life completely re-oriented in Christ, (the essence of Epiphany and Easter celebration), a season of baptismal preparation was necessary. The season of baptismal preparation directly preceding Easter developed into the season of Lent. The season of baptismal preparation prior to Epiphany developed into the season of Advent. Each preparatory season was an intense time of prayer and scrutiny, a time to commit one’s self to the purification of sin and transformation into Christ-like righteousness, and a time to expectantly ready oneself to enter into the full worship of the church.

Additionally, since the whole church invested in the spiritual preparation of the baptismal candidates, the seasons of Advent and Lent guided the spirituality of the entire worship community. Both Advent and Lent were seasons for penance, repentance, sacrifice and simplicity in the church. They were contrite seasons observed with solemn prayer and fasting. Furthermore, in line with the purpose of preparation for baptism, they each called the church to reflect on the baptismal reality of dying to sin and rising to new life in Christ. Yet, where Lent was a time for the church to focus on salvation through Christ’s life, death, and ultimately his resurrection on Easter; Advent was a time for the church to focus on hope through Christ’s incarnation revealed in his first coming in human form and anticipated in his second coming in final victory.

Purple to Pink
Eventually, the corporate spiritual experience of preparation and celebration was established into a yearly pattern of worship through the formation of the liturgical calendar. Each season of the liturgical calendar was signified with its own particular mood, practices, theological accent, and scriptural concentration. Particular colors were displayed in paraments around the worship space and in the vestments worn by clergy to represent each season of the liturgical calendar. Though simple rituals, these external processes helped guide the inner experience of the worshiper in meaningful ways. Worship and spirituality were cultivated through cycles of light and darkness, symbols of joy and penitence, and patterns of feasting and fasting.

The color traditionally chosen for paraments and vestments in the church during Lent and Advent was a deep purple, signifying royalty, repentance, and suffering. These colors set a quite somber and melancholy tone. Still, in the midst of such solemnity, the church recognized that Christians are never a people without joy. When true repentance occurs, joyful obedience is the result; thus, there is joy to be celebrated even in the most penitential times. Moreover, joy is not only a fruit of the Holy Spirit’s work in an individual’s life but also a characteristic common in God’s Kingdom.

As the liturgical calendar developed, one Sunday was set aside in each season – the fourth Sunday in Lent and the third Sunday in Advent – to focus on joy. The color pink (or more accurately, rose) was chosen as a reminder on these Sundays that even in the midst of longing, penitence, and fasting, the church never ceases to rejoice.

In the attitude of rejoicing, on the third Sunday of Advent and the fourth Sunday in Lent the church changed its paraments and vestments from purple to pink. Centering the church’s worship in joy, services during Lent began with the statement, “Laetare Jerusalem” (or “Rejoice, O Jerusalem”), causing the fourth Sunday of Lent to become known as Laetare Sunday. Correspondingly, the third Sunday in Advent was called Guadete (or Rejoice) Sunday, so named for the use of Philippians 4:4 as a central scripture read and sung in worship: “Rejoice in the Lord always, again I say, rejoice.” Additionally, one of the four purple candles in the Advent wreath was changed from purple to pink on the third Sunday in Advent. Even today, the third candle in the Advent wreath is commonly referred to as the joy candle.**

Repentance to Joy
It is important to not forget that in the midst of the solemnity of Advent there is joy! We rejoice that we stand as those between the first and second advent, recognizing that Christ has come incarnate into this world and celebrating with hope and eagerness that he will come again!

Church leaders and worship planners need to keep in mind how joy can be appropriately celebrated in the midst of Advent. Here are a few (meager) suggestions of practices that might help bring an awareness of joy into worship during the Advent season:

I pray that the joy of Christ fills our worship this Advent. May we proclaim in confidence with joy that Christ has come, Christ has died, Christ is risen, Christ will come again!

*It could easily be argued that in the western church today, the two highest days of celebration are Christmas and Easter. Ancient liturgical documents, however, show Epiphany as being both older and having a more important place in Christian history than Christmas. Many eastern churches still give prominence to Epiphany over Christmas.

**The development of the practice of candle lighting during Advent is somewhat obscure. At one point, the church did a similar practice of lighting seven purple candles during the season of Lent. Perhaps the practice was simply carried over from Lent to Advent. There is also speculation that the liturgical act originated in Germany, adapting a pagan practice where the Germanic people would light candles during the long December nights as a symbol of hope in the darkness.