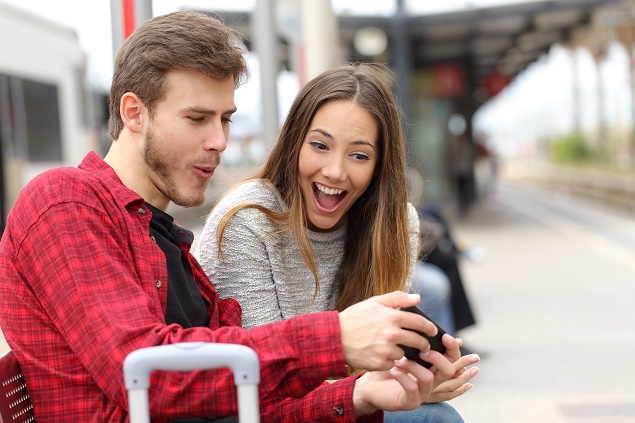 It’s fair to say that summer 2016 may not be remembered as the summer of the Rio Olympics, but as the summer of Pokémon Go. If you’ve been to any relatively densely populated area recently, chances are that you’ve seen people walking around with their gazes fixed on their smartphones. As of August 1, the app had been downloaded over 100 million times since its release. By some accounts, the app is now pulling in $10 million a day.

Pokémon Go is a video game that is made for smartphones. The basic idea is to walk around outdoors to find imaginary creatures called Pokémon. Throughout these neighborhoods, there are PokéStops, which are landmarks players can stop at to resupply, and Pokémon Gyms, where a player’s Pokémon can battle other Pokémon for goodies and points.

It’s an understatement to say that Pokémon Go is a cultural phenomenon, and – much like other cultural phenomena – some churches have been reluctant to embrace it. However, some churches around the country have thrown open their doors and arms to welcome the wandering hordes of smartphone-wielding Pokémon players. Here are some stories from the “front lines” of Pokémon evangelism:

Washington Street UMC is a 156-year old church located in the heart of historic Old Town Alexandria, Virginia. The original building has survived throughout those 156 years and is a beautiful anchor to its surrounding neighborhood. It is also a PokéStop.  The lead pastor of the church, Rev. Thomas James, has placed a sign on the front door acknowledging that the church is a PokéStop and inviting aspiring Pokémon masters back to service on Sunday mornings. 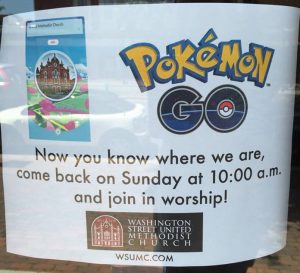 The motivation for putting the sign up is pretty straightforward. “The church has been here for a long time, and it blends into its surrounding neighborhood. There are people catching Pokémon, people sitting on our front steps every day of the week. To not engage with them seems like a failure of opportunity to connect with the community. It was a simple and easy way to acknowledge their presence, and let them know they are welcome.”

While the church hasn’t yet actively held events related to Pokémon Go, Rev. James plans on experimenting with integrating the game into future community outreach events.

Frostburg UMC isn’t a PokéStop. However, the Lutheran church next door is a Pokémon Gym. Pastor Kyle Durbin has embraced the phenomenon, and has gone as far as to weave Pokémon Go into a sermon on the Parable of the Rich Fool. Apparently, his congregants took this message to heart… well, at least part of it. Pastor Durbin reports that one of the older members of his congregation came up to him several days later and excitedly told him about how she had been able to interact with a younger person by connecting with him about Pokémon Go.

These connections have also occurred with Pastor Durbin as well, who on occasion has sat outside his church and interacted with people who were attracted to the location because of the Pokémon gym next door. He reports that he’s had several positive conversations with people in his community and sees it as an opportunity to introduce himself as the pastor of the church. In addition to the community connections, he’s been able to connect with the youth members of the church, “As a pastor, and as a person, it’s a good way to get a conversation going – as a new pastor, it gave me an immediate connection and conversation topic with some of the youth I was being introduced to – and I feel like it actually helped get our relationship off to a good start.”

Ida UMC is a smaller congregation in Ida, Michigan. The lead pastor, Corey Simon, has been intentional about making his church as welcoming as possible for Pokémon “trainers”. He’s put out free sodas and set up a station in front of his church where players can recharge their smartphones. When asked about why he thinks this Pokévangelism ministry is important, he said, “Millennials and other young people are playing Pokémon Go in droves and the game is taking them right to our doorstep.  We have never had the opportunity we have now. We have three options. One, ignore this opportunity and miss out on new people. Two, ask them to leave and alienate those just out having fun. Or three, accommodate them and at the very least be remembered as the church that can show love, even in a silly way.”

These are just a small sampling of stories from churches in different ministry contexts. Of course, your mileage may vary. The key takeaway here isn’t necessarily about Pokémon Go. These stories are (mostly) examples of how churches have responded to what’s happening outside of the four walls during the other six days of the week, and have, in a small way, become relevant again in their communities.

The common thread among all of these examples of maintaining relevancy is that none of these churches had a “hard ask.” That is, attendance at the church was not a precondition nor was it even brought up. The churches were simply present in the community, reminding their neighbors that they are welcomed – even if it is just to catch the Pikachu in the parking lot.