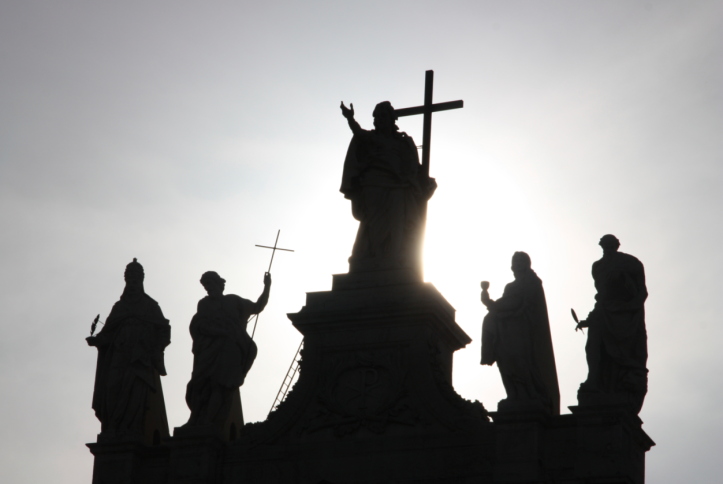 All this took place because the Israelites had sinned against the Lord their God, who had brought them up out of Egypt from under the power of Pharaoh king of Egypt. They worshiped other gods and followed the practices of the nations the Lord had driven out before them, as well as the practices that the kings of Israel had introduced. The Israelites secretly did things against the Lord their God that were not right. From watchtower to fortified city they built themselves high places in all their towns. They set up sacred stones and Asherah poles on every high hill and under every spreading tree. At every high place they burned incense, as the nations whom the Lord had driven out before them had done.

They did wicked things that aroused the Lord’s anger. They worshiped idols, though the Lord had said, “You shall not do this.” The Lord warned Israel and Judah through all his prophets and seers: “Turn from your evil ways. Observe my commands and decrees, in accordance with the entire Law that I commanded your ancestors to obey and that I delivered to you through my servants the prophets.” (2 Kings 17:7–13)

Core truth: God sent prophets to call God’s people to realign with their vocation of serving as God’s missional community for the nations.

God’s prophets are diverse in origin. Among the writing prophets, Ezekiel is a priest, Isaiah is a political insider, and Amos is a shepherd. While most are men, when we include the narratives about prophets in Joshua–Kings, we will discover that there is a female prophet named Huldah (2 Kings 22:14–20) during the days of Josiah.

God’s prophets also deploy both words and physical acts to proclaim God’s will for his people. The actual words of the prophets dominate their books, but the prophets use other methods as well. Here are some examples: the book of Jonah speaks God’s Word through a narrative about Jonah’s mission to the Assyrian city Nineveh. Hosea marries an unfaithful woman for the purposes of illustrating Israel’s unfaithfulness to God and his persistent love to woo Israel back to faithfulness.

The word prophet suggests to most people someone who can predict the future, a foreteller. Israel’s prophets do point forward to a coming age of salvation, but most of their prophetic words address issues that God’s people face in their present context. In other words, God’s prophets were primarily forthtellers to the present rather than foretellers of the future.

God’s prophets speak boldly the very words of God to his people in order to call them to immediate realignment with God’s will. God’s people preserve the words of the prophets into our biblical books because they have confidence that the Word of God through the prophets will continue to shape the lives of God’s people for generations to come. It is crucial for us to learn to read the prophets as authoritative guides for living faithfully as God’s people today. If we focus primarily on the future-oriented parts of their words, we distort their message.

Prophets as God’s Response to Unfaithfulness

God sends the prophets in response to the unfaithfulness of God’s people. As we’ve seen in our study of the Bible thus far, God desires for his people to serve as a missional community that reflects God’s character in/to/for the nations. Instead, God’s people often reflect more the character of the nations by turning to other gods and by participating in social injustice. When God’s people lose sight of their true identity, God sends his messengers, the prophets, to deliver a reality check. It is an act of grace that God sends his prophets to call his people to realign themselves with his mission and character.

If the biblical ethos may be summarized succinctly as a call to love God and love neighbor, we can use this rubric to hear the prophetic critique of God’s people and the demand for realignment.

It begins with a full allegiance to God. The Lord alone is God. The Lord is the only being deserving of worship. All other “gods” are simply part of creation and need to be submitted to the kingship of God. Yet these other gods constantly tempt God’s people and cause their commitment to the Lord to ebb and flow. Living among the nations who did not know the Lord puts God’s people in constant contact with other forms of spirituality. God’s prophets powerfully call his people back to fidelity to the Lord alone.

In creation, God envisions a harmonious interplay between himself and humanity, but also within humanity and between humanity and the created world. God calls Israel to become a new humanity to serve as ambassadors and witnesses. Israel lives, breathes, and works among the nations but it is to be distinctive and not merely like the other nations. Its life together as God’s people is to testify to the world about a different kind of God who desires to bless the nations and institute justice, peace, and abundance for all creation.

The ethos of God’s people has justice at its center. The call of love for neighbor speaks against special privileges for the powerful and well connected, and extends God’s protections and provisions to all, including those most marginalized in society such as slaves, the poor, and aliens.

The Bible steadfastly links spirituality and ethical living. To live as the human beings that God intends for us to be, we have to learn that these elements cannot be compartmentalized. The prophets remind God’s people of these truths and insist that one does not love God apart from the practice of justice for others. Moreover, true justice cannot be defined or understood apart from the character of God and faithfulness to him.

Reading the prophetic books also challenges the reader about God’s coming judgment for unfaithfulness. The prophets are not feel-good preachers. They bring devastating critiques against the unfaithfulness of God’s people.

A faithful reading of their words will challenge Christ-followers today to continuous realignment with the mission of God.

Proclaimers of a New Future

The prophets serve as a natural link to the New Testament. The Old Testament ends with the prophets because they already anticipate a future work of God that will transform God’s people and extend God’s blessings to the nations. God inspires his people to a profound hope fueled by the anticipation of salvation on the other side of judgment. This salvation would involve the coming of a new King to usher in the kingdom of God and with it transform God’s people into the missional community that God would then send into the world to bless the nations.