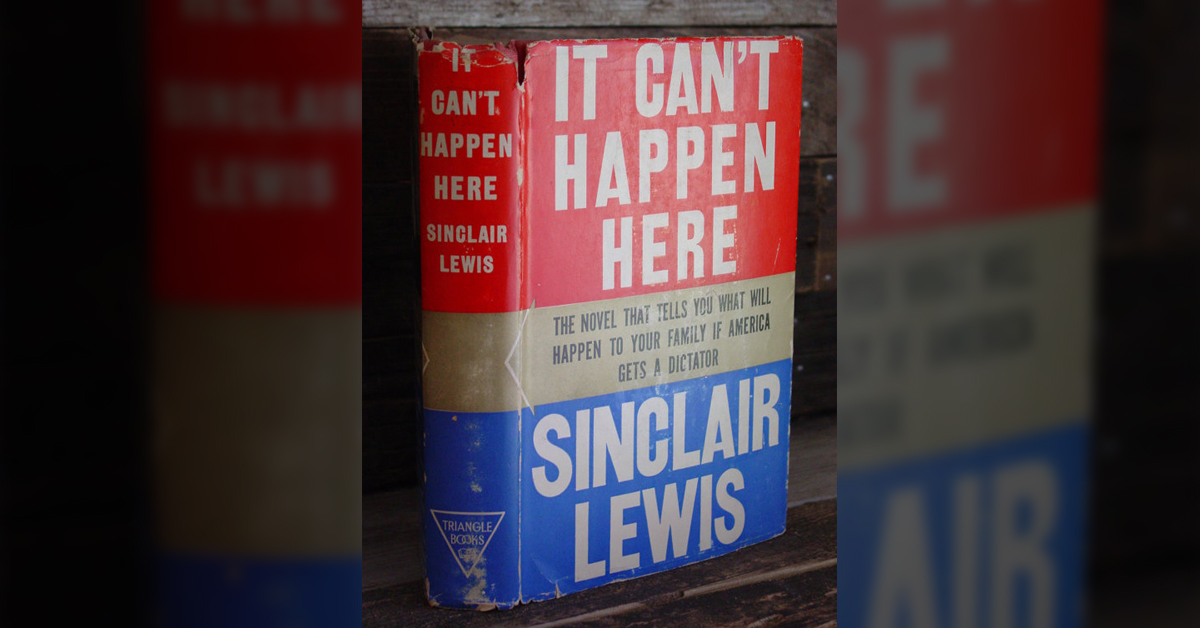 Nobel Prize-winning author Sinclair Lewis was alarmed by the rise of Adolf Hitler in Germany. In 1931 his journalist wife had interviewed Hitler. Now it was 1935. Lewis decided he’d better write a novel warning the United States.

Let’s give the novel a quick look.

First, just to clarify: I’m speaking here of Sinclair Lewis (1885-1951), not Upton Sinclair (1878-1968). The two are sometimes confused with each other. Sinclair Lewis wrote Main Street, Babbitt, and other books. One of his novels, Elmer Gantry, was a story about a huckster evangelist. It was also a play and a movie.

Upton Sinclair on the other hand is best known for his 1906 novel The Jungle—an exposé of the meat-packing industry in Chicago which led to the passage of the Pure Food and Drug Act.

I had heard of It Can’t Happen Here for decades—since I was in college, I guess. I knew it was a novel about a fascist takeover of the United States. Time and again I thought: I should read that! But I wasn’t really moved to do so until recent months. I actually began reading the book last December 30.

Could It Happen Here?

It is well to remember that It Can’t Happen Here was published in 1935, not 1939 or 1940. Hitler had come to power in Germany two years earlier. Already Hitler had largely turned Germany into a Nazi dictatorship. But many of the horrible things we associate with Hitler and Nazism had not yet happened.

It Can’t Happen Here was an instant bestseller. Lewis’ premise: What if it did happen here? What if someone like Hitler became President of the United States? Lewis thought a likely candidate might be Senator Huey Long, a rabble-rousing Democrat from Louisiana who was threatening to challenge Franklin Delano Roosevelt for the Democratic nomination in 1936. But Long was assassinated at the Louisiana State Capitol in 1935.

The two main characters in It Can’t Happen Here are Berzelius (Buzz) Windrip, a Democratic senator from Kansas, and mild-mannered Doremus Jessup, editor of a small-town newspaper in Vermont. Jessup is described as a “rather indolent and somewhat sentimental liberal.”

In the novel, FDR fails to win renomination to a second term in 1936. It’s the middle of the Great Depression. In the months leading up to the Democratic convention, Senator Windrip generates a powerful groundswell of popular support and beats out Roosevelt, becoming the Democratic candidate for President. In November Windrip wins the Presidential election.

The rest of the novel tells what happens over the next four or five years.

Editor Jessup is alarmed by Windrip’s candidacy, and even more by his election. Could Windrip turn out to be the American Hitler? When he raises this worry, everyone assures him: Don’t worry—it can’t happen here.

With Buzz Windrip in the White House, Jessup writes a stream of editorials criticizing the President and his policies and his increasingly fascist actions. This gradually gets Editor Jessup in trouble. Eventually he is jailed, along with many others. The twists and turns of what happens to Jessup, to his wife and son and daughter, to his Vermont friends, and to his newspaper, provide the grist for much of the novel.

The other major stream of the story concerns the administration of President Windrip.

Rise of a Demagogue

How could someone like Buzz Windrip ever end up in the White House?

Partly it was a matter of the mood of the times. Disillusionment and anti-immigrant sentiment were rising. Early in the novel one character, Louis Rotenstern, says, “We ought to keep all these foreigners out of the country.” Rotenstern, we read, “was altogether convinced that if the ignorant politicians would keep their dirty hands off banking and the stock exchange and hours of labor for salesmen in department stores, then everyone in the country would profit, as beneficiaries of increased business, and [everyone would] be rich.”

Lewis does a good job of describing Windrip’s candidacy. Windrip embodies an ardent nationalism. Much of his rise has to do with his bestselling and highly promoted book, Zero Hour—written in fact by Windrip’s political guru, an unscrupulous journalist named Lee Sarason.

Lewis provides numerous quotes from Zero Hour and from Windrip’s speeches at big rallies. In fact Lewis begins several of his early chapters with quotations from the fictitious Zero Hour.

Here is a sampling of quotes from the book and from Windrip’s speeches:

I don’t pretend to be a very educated man, except maybe educated in the heart, and in being able to feel for the sorrows and fears of every ornery fellow human being.

To you, [my supporters,] and you only I look for help to make America a proud, rich land again.

I know the Press only too well. Almost all editors hide away in spider-dens, men without thought of Family or Public Interest or the humble delights of jaunts out-of-doors, plotting how they can put over their lies, and advance their own positions . . . .

When I am protestingly dragged from my study and the family hearthside into the public meetings that I so much detest, I try to make my speech as simple and direct as those of the Child Jesus talking to the Doctors in the Temple.

Love and . . . Patriotism have been my sole guiding principles in Politics. My one ambition is to get all Americans to realize that they are, and must continue to be, the greatest Race on the face of this old Earth, and second, to realize that whatever apparent Differences there may be among us, [still] we are all brothers, bound together in the great and wonderful bond of National Unity. [But, Windrip explains,] this does not apply to people who are racially different from us [italics in original].

I shall not be content till this country can produce every single thing we need, even coffee, cocoa, and rubber, and so keep all our dollars at home. . . . Such an aspiring Vision is what we want, and not all this nonsense of wasting our time [in international negotiations] at Geneva and talky-talk at Lugano, wherever that is. [It’s in Switzerland, actually.]

I have no desire to be President. . . . My only longing is to Serve.

The real trouble with the Jews is that they are cruel. . . . Whereas the Nordic is distinguished by his gentleness and his kind-heartedness to friends, children, dogs, and people of inferior races.

Et cetera. You get the point and the flavor.

Well, Windrip becomes a media sensation. Even journalists who dislike him, “by the unusual spiritedness and color of their attacks upon him, kept his name alive in every column.”

Windrip and Sarason organize their supporters through something called The League of Forgotten Men, and later an activist group called The Minute Men. Part of Windrip’s platform is to provide every “real American family” a “bonus” of $3,000 to $5,000. This will be possible because of a great surge in the economy. As it turns out, the bonus never happens, once Windrip is in the White House.

As President, Windrip becomes increasingly paranoid and isolated. We read:

And daily he wanted louder, more convincing Yeses from everybody around him. . . . . Anyone, from Sarason to inter-office messenger, who did not play valet to his ego he suspected of plotting against him. He constantly increased his bodyguard, and as constantly distrusted all his guards and discharged them. . . . [I]n all the world he [now] had no companion save his old aid Lee Sarason [and one other friend] to whom he could talk easily.

Without revealing too much (in case you want to read the book), I can say that Sarason eventually turns against Windrip, and the President does not succeed in serving out his four-year term.

As I mentioned earlier, Jessup is eventually imprisoned for his outspoken criticism of President Windrip and his subversive political activism. Jessup has a very nonpolitical, clueless wife; a teenage daughter, Sissy; and an older son, who becomes a successful businessman. Sissy turns into an outspoken critic of Windrip but her brother, who benefits from the Windrip administration, supports the President.

Eventually Jessup comes to regret his own passivity during the months when he had seen the Windrip phenomenon developing. He muses:

In prison, Jessup survives horrid conditions. With the help of friends, he escapes and secretly makes his way into Canada. He is preceded into Canada by his daughter Sissy and a close woman friend, Lorinda. Now, we read, “in a forest clearing, with snow along the spruce boughs, a few feet across into Canada, [Doremus Jessup peers] into the eyes of his two women, curtly saying good-bye [to his helpers], and trudging off into the new prison of exile from the America to which, already, he was looking back with the long pain of nostalgia.”

In Canada Jessup becomes part of an increasingly activist opposition to the Windrip government. Eventually he returns secretly to the United States as part of a covert movement to undermine the dictatorial government.

Later another acquaintance of Jessup’s, a doctor, says: “America’s the only free nation on earth. Besides! Country’s too big for a revolution. No, no! Couldn’t happen here!”

Even after Windrip is elected, Jessup thinks a real dictatorship won’t come. “He simply did not believe that this comic tyranny could endure. It can’t happen here, said even Doremus [Jessup]—even now” (italics in original). Finally, later, Jessup realizes: Yes, it could—yes, it has.

Though It Can’t Happen Here was hastily written, it can be quite lyrical in places. I for instance liked this passage:

It had been cold in Vermont, with early snow, but the white drifts lay to the earth so quietly, in unstained air, that the world seemed a silver-painted carnival, left to silence. Even on a moonless night, a pale radiance came from the snow, from the earth itself, and the starts were drops of quicksilver.

But following the redcap carrying his shabby Gladstone bag, Doremus came out of the Grand Central [Station in New York City], at six o’clock, into a gray trickle of cold dishwater from heaven’s kitchen sink.

Jessup was in Manhattan to witness a Windrip political rally at Madison Square Garden (which is not a garden and has little to do with Madison Square, we are reminded).

One can hardly read It Can’t Happen Here without thinking of Aldous Huxley’s Brave New World (1932) or George Orwell’s 1984 (1949), or maybe Animal Farm (1945), if one has read them. It Can’t Happen Here is of course much different. Probably the point of closest similarity is the way truth gets turned into propaganda, which then passes as truth. Orwell once wrote, “In a time of universal deceit, telling the truth is a revolutionary act.”

Last January, Yale history professor Beverly Gage wrote an essay on It Can’t Happen Here, published in The New York Times Book Review. She notes that although Lewis’ novel has been long forgotten, recently it has enjoyed a new surge of popularity. Late last year, she says, “the book was reportedly sold out on Amazon.com.”

Gage notes, “While the book skewers Jessup’s passivity, . . . it does little to suggest viable modes of engagement under the Windrip regime, short of abandoning home and family and fleeing to Canada.”

Professor Gage concludes: It Can’t Happen Here “underscores how difficult it can be to sort out what to do at moments of swift political change and social confusion. In our brave imaginations, we undoubtedly do the right thing when fascism comes to America. In reality, we might not recognize it while it’s happening.”

I found the book very interesting and certainly worth reading and pondering. Also relevant.