The Destruction of Darkness: Christian Distinctiveness in the Ancient World
close
Menu

Imagine a world filled with gods. In this world there are gods for every aspect of life. There is a goddess who is the benefactor of the imperial order. There are gods who sustain everything from crop production to the various colonies of the empire. Indeed, the whole of society is built upon a socio-religious order that interpenetrates every aspect of life, from the common citizen up to the safety and security of the whole empire.

Now imagine that a totally new movement emerges within this world. This movement has its roots in the strange beliefs of an obscure people called Jews in the eastern part of the empire. Yet this new movement—while retaining the odd Jewish belief that there is only one true God—places at the center of its beliefs a crucified Galilean healer and prophet whose followers claim has been bodily resurrected. Even stranger, this movement claims that the plethora of gods that keep society and culture running are, in reality, lifeless statues at worst, or evil spiritual beings at best; certainly not gods. This movement’s denial of the gods that are bound to the imperial structure and society is not simply a religious claim; it is implicitly the denial of the very power and divine legitimacy of the empire itself. It is equivalent to anarchy.

Of course, the world that I am describing is not imaginary at all. It is the socio-religious setting of the ancient Greco-Roman world and the “strange,” “dangerous,” and “obstinate” new movement of Christianity into it. In our world—which has been formed in almost every way by the Christian revolution—we have forgotten how foreign and distinct Christianity was (and is) from every other religious and philosophical worldview. 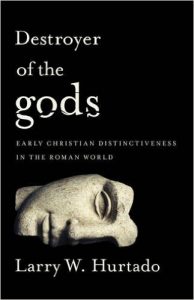 It is this historical amnesia that New Testament scholar and historian Larry Hurtado seeks to rectify in his latest book, Destroyer of the gods: Early Christian Distinctiveness in the Roman World (Baylor University Press, 2016). Hurtado’s primary aim in the book is to make his readers aware of just how strange Christianity was to the Greco-Roman world it entered into. As Hurtado notes near the end of the book’s introduction:

A New Way of Believing

Hurtado begins the book by looking at how the early Christians were viewed by the their non-Christian contemporaries, both Jewish and pagan. Of course, the chief example of ancient Jewish animosity toward the new Jesus movement is Saul of Tarsus, who later went by his Roman name Paulos, or Paul, after meeting the risen Jesus on the road to Damascus. Prior to this, Paul viewed Christianity as objectionable and blasphemous against God, a view shared by many of his Pharisaic contemporaries and later by their rabbinic successors.

Far more telling though are the pagan criticisms of Christianity. Roman historians such as Tacitus and Seutonius viewed Christians as adhering to a dangerous superstitio, a term that Hurtado notes, “connoted then religious beliefs and rituals [pagans] deemed excessive, repellant, or even monstrous” (p. 22). Similar criticisms can be found in voices as diverse as the great physician Galen, the philosopher-emperor Marcus Aurelius (yes, the one at the beginning of the movie Gladiator), and the pagan intellectual Celsus.

The common theme uniting this array of voices is their belief that Christianity was not simply strange, but in some sense dangerous to the religious and social order. Indeed, there was no shortage of odd religious groups in the Greco-Roman world. However, none of these sects bound their adherents exclusively to one God who ruled over all. None of them declared that all other “gods” (including those that protected and upheld the empire) were malignant spiritual beings at best. And certainly none of them declared that the Creator of all reality had revealed Himself in the form of a crucified and bodily-resurrected Galilean. These claims were not simply odd; they were repugnant to the pagan mind. Again it is helpful to quote Hurtado here:

“The notion that there is one true and transcendent God, and that this God loves the world/humanity, may have become subsequently so much a familiar notion, whether or not it is actively affirmed, that we cannot easily realize how utterly strange, even ridiculous, it was in the Roman era” (p. 64).

A New Way of Behaving

Perhaps just as jarring as their distinctive views about God and faith were the early Christians’ ethics. While early Christians were ethically unique in many ways (acknowledging the full personhood of slaves, eliminating the sexual double-standard of male extramarital sex, caring for the poor as full persons, etc.) two countercultural practices particularly stand out.

First, the exposure of unwanted infants to death was a normal aspect of society. In a patriarchal cultural this meant that it was usually unwanted baby girls who were left to die. If they were lucky they were found and sold into slavery (usually prostitution). This was a normal practice in the ancient world. Yet, Christians expressly denounced it and forbade it among their communities. Indeed, the only other religious group that was anywhere near as strident in this refusal to engage in infanticide was Judaism, out of which Christianity emerged.

Second—and perhaps most shocking to us—was the Christian creation of the concept of child sexual abuse. In the pagan world the sexual use of young children, particularly young boys, was not only permitted, it was often actively celebrated. Greco-Roman poets such as Juvenal, Horace, and Strato used terms like paiderastēs (“a lover of boys/children”) to describe what they perceived as the good of sexual activity with children. Of course the very thought of this is horrifying to us, but that is only because the early Christians looked at this commonly accepted, and even celebrated, practice and coined a new term to describe those who did it: paidophthoros (“a destroyer/corrupter of children”).  What the pagan elite viewed as good, the early Christians saw as utter evil. As Hurtado observes in the early Christian document called the Didache (ca. 100 AD) the explicit prohibition, “you shall not corrupt [sexually] children” (Did. 2.2) appears alongside prohibitions against murder and adultery. Such disgust with the pagan practice of sexual use of children appears in the work of Christian writers up through the second and third centuries AD, including Justin Martyr, Clement of Alexandria, and Origen, among others.

What then is the practical take-away of Hurtado’s study? First, it alleviates much of our historical amnesia. Living in a society that has been shaped by the Christian revolution, we forget that the world was once ruled by a different view of religion and ethics. We forget that when St. John wrote, “The light shines in the darkness, and the darkness did not overcome it” (John 1:5, NRSV), he really did mean that the world was dark and not simply “slightly messed up.” Destroyer of the gods helps us to remember that in many ways, the Kingdom of God that Jesus speaks of really has been inaugurated and has had drastic effects in the world, though we still await its final consummation.

Second, Hurtado’s study provides us with a connection to our countercultural past in a world that increasingly looks like the pluralistic Greco-Roman one. In a world where the murder of unborn infants is looked at as normal, and even celebrated by modern “poets” with hashtags like #ShoutYourAbortion, reclaiming the history of ancient Christians who denounced culturally-acceptable infanticide provides us with a model to emulate. In a world where women are objectified and shamed while powerful men celebrate their sexual conquests as “locker room talk,” the early Christian witness to the equality of the sexes and the elimination of sexual double standards provides us with a heritage to draw upon in living out a Christian sexual ethic.

Destroyer of the gods is not merely a fascinating and well-researched study of early Christian socio-religious distinctiveness, though it is certainly that. It is also a call to remember our heritage as a set apart people who defy the socio-cultural darkness that we live in with the light of the gospel. “Early Christianity was not simply odd;” Hurtado notes, “it was deemed dangerous to traditional notions of religion and, so it was feared, also for reasons of social stability” (p. 184). The early Christians were so committed to living as the cruciform people of God that they defied the entire sacral order of the ancient world. By their faithfulness to Christ and the power of the Spirit they became destroyers of the pagan gods and all the darkness that they upheld. May we have the faithfulness to do likewise.

© Seedbed 2021
The Destruction of Darkness: Christian Distinctiveness in the Ancient World
MORE STORIES