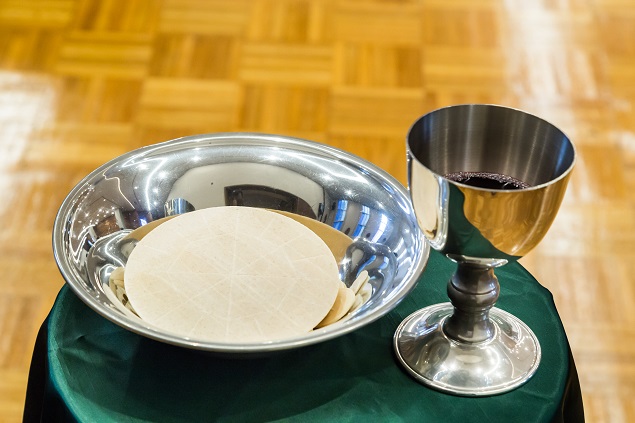 As a child growing up in a mainline, high church tradition, I was taught a great reverence of the Lord’s Table. While I can’t say I was never caught running or causing mischief in the sanctuary of that stately church, I’m certain such behavior never made its way near the altar. It was as if there was an invisible fence surrounding the chancel and the table of the Lord and I was the proud owner of the electric shock collar, keeping me at an arm’s distance from this holy, sacred space. I remember, on more than one occasion, being dared by the Pastor’s kids or my Sunday school buddies to run up and touch the altar cloth; but I was always too intimidated and never acted on the dare. Outside of approaching the table with my parents to receive a blessing from the Pastor while they received communion, the altar was forbidden and uncertain territory.

My sense of reverence for the table was high, to say the least. To that end, I had some level of fear and trepidation upon approaching the altar for my first communion as a teenager. The imaginary, electric shock collar had been removed, but my sense that this space was holy and off-limits still lingered in my heart. I remember anxiously climbing the steps toward the space around the table where I would be offered the bread and the cup. While the room was anything but quiet, I heard nothing but my own breathing and my heavy and uncertain steps toward my destination. This was serious business. And now that I was allowed to come to the table, I was unsure of how it should be engaged.

And then the strangest thing happened. As the Pastor approached me with the bread and the cup, the congregation – including those standing with me at the altar – began singing a joyous refrain:

People who had previously had their heads bowed, offering prayers of examination and confession, were now smiling and receiving the elements in what seemed to be celebration, joy, and thanksgiving. The song went on:

“Worthy is Christ the Lamb, whose blood set us free to be people of God.
Sing with all the people of God and join in the hymn of all creation.”[1]

In a matter of moments, this place I had thought of only as solemn and stoic, became a home of celebration and praise – a place where young and old, black and white, rich and poor, gathered and received the gifts of God together. I suddenly looked forward to returning each week as we gathered at Christ’s table.

The truth is, the table of God is many things. It is a place to be solemn and to remember the sacrifice of Christ made on our behalf. But it’s also a place to give thanks, celebrating the grace and love extended to us by the Father, through the Son, in the power of the Holy Spirit. And it is the place where, together, we are unified, as a body, through God’s gifts which are offered freely to us all.

Far too often, a church’s table praxis will only tell one part of this amazing story. We approach the table for the Lord’s Supper – memorializing the life and death of Christ, somberly remembering his sacrifice in hushed tones while meditative music plays or silence is kept. Other churches celebrate the Eucharist in an individualistic spirit of praise and thanksgiving, but fail to remind the congregation of the corporate and unifying act of receiving Christ’s body and blood. Still others celebrate communion regularly, offering the bread and the cup to one another – celebrating our unity in Christ, without calling the participants to examine themselves, confess and repent, acknowledging the great cost that was paid for their redemption now offered to them through these gifts of God.

As you lead your congregation to the table in this upcoming Advent season and beyond, may you do so in a way that engages the full story of God – remembering, thanking and celebrating, and unifying the Body of Christ in receiving his great gifts of grace. And in so doing, may the table of God again become a place where our people find relief, joy, and community.