What Have You Been Doing All This Time? - Seedbed
close
Menu 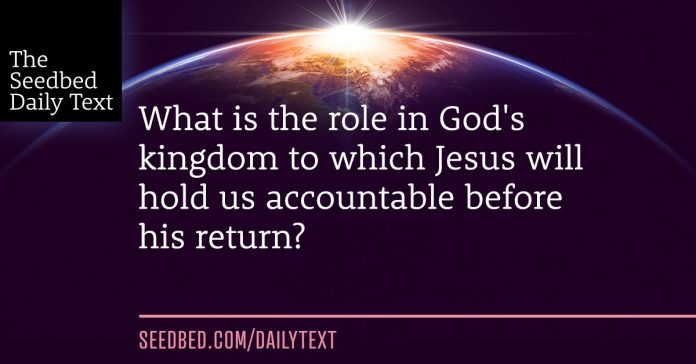 36 “However, no one knows the day or hour when these things will happen, not even the angels in heaven or the Son himself. Only the Father knows.
37 “When the Son of Man returns, it will be like it was in Noah’s day. 38 In those days before the flood, the people were enjoying banquets and parties and weddings right up to the time Noah entered his boat. 39 People didn’t realize what was going to happen until the flood came and swept them all away. That is the way it will be when the Son of Man comes.
40 “Two men will be working together in the field; one will be taken, the other left. 41 Two women will be grinding flour at the mill; one will be taken, the other left.
42 “So you, too, must keep watch! For you don’t know what day your Lord is coming. 43 Understand this: If a homeowner knew exactly when a burglar was coming, he would keep watch and not permit his house to be broken into. 44 You also must be ready all the time, for the Son of Man will come when least expected.

For twenty-six years my father traveled from Dallas, Texas to Cairo, Egypt for work. He was usually gone between three and six months, but sometimes it was longer.
Dad runs a tight ship, but the second the wheels on his plane went up, my mom, little brother, and I would immediately put things to our liking. No eating in the living room? Not anymore. The dog isn’t allowed in the house? Guess who’s cuddled up on the sofa taking a nap. Finish my homework first? My favorite show is on, so I’ll watch it while eating pancakes for dinner in the living room while feeding bacon to the dog.

We slacked off on everything . . . until the phone call. The one saying he was in the air and would be home in a few hours.

We never knew when he would return. We always thought we’d know well in advance and have of time to get things in order. There would be rumors, and plans would be made, but there was always something to hold him up. So it became common practice for his office to wait until he was on a plane, somewhere over the Atlantic, before they would let us know.
So we we panicked. Now it was all hands on deck! Vacuum the dog dander off the cushions! Throw something that wasn’t pancakes, pizza, or takeout in the oven for dinner! Is the dog still in the house?

We made big “Welcome Home Dad!” banners and hung them from the fireplace mantle. There would be hugs and gifts, unpacking of bags, a big family dinner and then a night’s sleep to overcome the jet-lag.

Then my father would wake up and get to work. He would pore over every statement, bill, and report card piled up in his absence, then lay out the evidence of money that shouldn’t have been spent, late payments on bills, slipping grades, dog hairs on the carpet, and no real food in the pantry.

Then came his judgement:

“What have you been doing while I was gone? I expect you to be the same person while I’m away that you are when I’m here.”

Previously, we saw that when Jesus returns his judgement for the world will primarily be about fixing what is broken and restoring what was lost.

But what about his judgement for us who are believers? Do we have a role to play now, before his arrival, where he’ll hold us to account?

We think we’ve got enough time, but we get distracted by our own wants (and sometimes by trying to figure out when he’ll return) instead of who we’ll be and what we’ll be doing when he does return.

And in Matthew 25, Jesus gives us believers a pretty clear expectation of what he’ll judge us for while he’s away:

31 “But when the Son of Man comes in his glory, and all the angels with him, then he will sit upon his glorious throne. 32 All the nations will be gathered in his presence, and he will separate the people as a shepherd separates the sheep from the goats. 33 He will place the sheep at his right hand and the goats at his left.

34 “Then the King will say to those on his right, ‘Come, you who are blessed by my Father, inherit the Kingdom prepared for you from the creation of the world.
35 For I was hungry, and you fed me. I was thirsty, and you gave me a drink. I was a stranger, and you invited me into your home. 36 I was naked, and you gave me clothing. I was sick, and you cared for me. I was in prison, and you visited me.’

And finally the criteria:

40 “When you did it to one of the least of these my brothers and sisters, you were doing it to me!’

So how do we get ready so we don’t have to scramble when we get the call he’s coming back?

© Seedbed 2021
What Have You Been Doing All This Time?
MORE STORIES