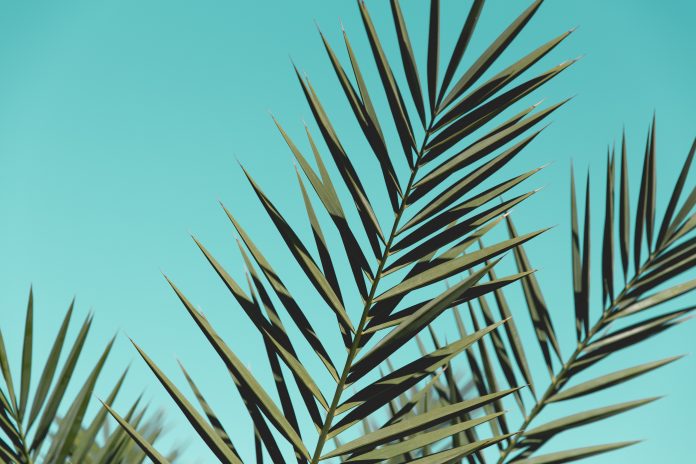 1 As they approached Jerusalem and came to Bethphage on the Mount of Olives, Jesus sent two disciples, 2 saying to them, “Go to the village ahead of you, and at once you will find a donkey tied there, with her colt by her. Untie them and bring them to me. 3 If anyone says anything to you, say that the Lord needs them, and he will send them right away.”
4 This took place to fulfill what was spoken through the prophet:
5 “Say to Daughter Zion, ‘See, your king comes to you, gentle and riding on a donkey, and on a colt, the foal of a donkey.’”
6 The disciples went and did as Jesus had instructed them. 7 They brought the donkey and the colt and placed their cloaks on them for Jesus to sit on. 8 A very large crowd spread their cloaks on the road, while others cut branches from the trees and spread them on the road. 9 The crowds that went ahead of him and those that followed shouted, “Hosanna to the Son of David!” “Blessed is he who comes in the name of the Lord!” “Hosanna in the highest heaven!”
10 When Jesus entered Jerusalem, the whole city was stirred and asked, “Who is this?”
11 The crowds answered, “This is Jesus, the prophet from Nazareth in Galilee.”
(Matthew 21:1–11 NIV)

Matthew’s account of the triumphal entry does indeed show the disciples and crowds apparently honoring Jesus as he rides in on a donkey. By riding a donkey rather than a mature horse, he avoids the image of a returning war hero. But Jesus is not that sort of king. It seems likely that Jesus got his disciples to requisition the animal he rode from one of his local disciples in Bethany, namely, from the family of Lazarus, for the account says that all the disciples had to say was, “the master has need of it.” The account mentions palm branches, and the waving of the palm branches was used to celebrate the Maccabean victory retaking Jerusalem.

It must be admitted that probably Jesus’ riding in on the donkey, coupled with the pilgrims saying “Hosanna,” then coupled with the palm branches raised all sorts of expectations about Jesus being some sort of new messianic or prophetic leader that might solve Jerusalem’s problems, or even triumph over the Romans. But again, Jesus was not that sort of king and was not setting out to set up that sort of kingdom in Jerusalem. Notice, even with all the fanfare, that the end of the segment has the resident of Jerusalem asking who in the world is this exalted person, to which the crowd only answers, “Jesus, the prophet from Nazareth.” They do not necessarily suggest he is the Messiah.

It is, however, possible that in the case of someone like Judas, if he had previously been a political zealot, that this entry signaled to him that Jesus would perhaps take over things in Jerusalem, and the cleansing of the temple (Matthew 21:12–13) might well have been interpreted as a symbolic gesture suggesting Jesus would clean house. But then when Jesus reiterates he came to die, not to start a coup, this must have crushed the hopes of anyone with zealot inclinations about kicking out the Romans. Perhaps that is why Judas does what he does at the end of the week.

Matthew is interested here, and in what follows in the Passion narrative, in emphasizing that what happened during this week was a fulfillment of one prophecy after another. Part of the reason for this is not just that Jesus did some unusual and unexpected things, but especially that no one was expecting a crucified Messiah, not even Jesus’ disciples, despite what he kept telling them. Citing scriptures repeatedly is Matthew’s way of saying this was God’s plan all along, however much it did not meet the expectations of the crowds, the authorities, and even the disciples. Jesus did not come to meet their expectations or demands, but rather to do God’s will, and God’s will was that his Son fulfill the prophecies and ransom captive Israel. He also came to meet our needs. 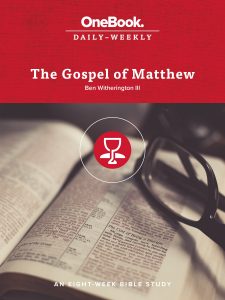 Did you enjoy this entry? Discover our OneBook: Daily-Weekly Bible studies, of which this entry is a part.

The Gospel of Matthew is perhaps the most popular of the four Gospels because it is so complete—it offers everything from a birth narrative to the passion, resurrection, and Great Commission, with everything in between. This Gospel even contains the cherished Sermon on the Mount in its most complete form, a block of teaching that hints at the unique identity of Jesus as the Messiah as it alludes to Moses’ giving of the Law on Mount Sinai.

In this OneBook Daily-Week study with Dr. Ben Witherington III, we discover Jesus as Matthew presents him—the incarnate wisdom of God that brings the kingdom of heaven to earth. Following the text through the stories, parables, and noting the special miracles, God’s people are presented with the mission and ministry of Jesus the Messiah who fulfills the Jewish Law. At times he raises the standard, other times he authoritatively reinterprets its meaning, and finally, he fulfills its requirements through his life, death, and resurrection. All of this is to widen and deepen the reach of God’s heavenly kingdom, which we discover extends to all people at the end of the Gospel.