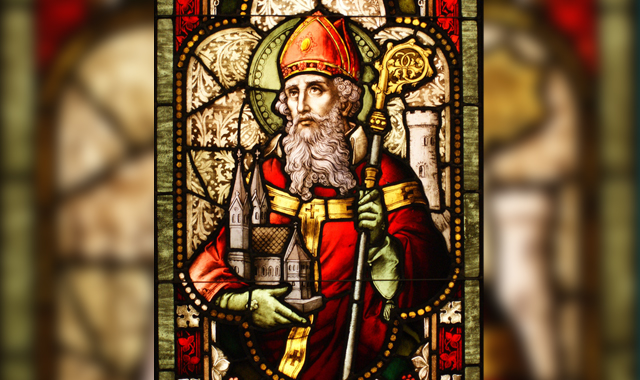 Saint Patrick, the Apostle of Ireland, was a 5th century missionary and bishop of the church. His ministry was exemplary in that he used his familiarity with the culture to effectively reach and convert large portions of the population. It is this legacy of love for a people not his own, and his contextualization of the gospel that ought to be commemorated by the church today.

The little we know of Patrick’s life comes from two letters penned by himself, while later traditions developed long after his death. Patrick was born in the late 4th century to an aristocratic Roman-British family. Though his family was Christian and he was likely baptized as an infant, he claimed to be an atheist throughout his childhood.

When he was about 16 years old, he was captured by Irish pirates from his home in Britain and taken to Ireland where he was sold as a slave. There he worked for six years where he tended sheep for his master. Patrick recognizes this adversity as the instrument that led him to a spiritual awakening: “After I came to Ireland I watched over sheep. Day by day I began to pray more frequently—and more and more my love of God and my faith in him and reverence for him began to increase.” Patrick claims that by his early twenties he had begun to pray up to a hundred prayers every morning.

His escape from Ireland came as a result of directions heard in a dream. One night he heard in his sleep, “You have fasted well—soon you will be going home.” Somewhat confused, though hopeful, the next day he had a second dream in which a voice told him, “Behold, your ship is ready.”

Patrick decided that this was his cue to make an escape, and although he recognized that Scripture taught him to submit to his master, he ruled in favor of listening to the voice of God instead. He ran away from his master and was able to make it to the coast, where he boarded a ship back to Britain by convincing the captain to take him as a crewman. Though they were able to reach land, the crew came to the point of near starvation, so Patrick prayed that God would intervene and provide for them. He recalls that almost immediately, a herd of wild pigs appeared for the men to feast on.

The Call to Ministry

We don’t have records of most of the time between Patrick’s return to Britain and his mission to Ireland, though it is safe to assume that after his call to ministry he progressed from deacon, to priest, and finally a bishop, upon request for serving in Ireland. One of the distinguishing marks of being a bishop is the authority to ordain clergy, which is something Patrick would have needed to spread the gospel in Ireland. It should be noted, though, that Patrick was not the first missionary to the island—not even the first bishop. Earlier, the Pope may have sent the bishop Palladius to influence the region away from the heresy of Pelagianism. While Pelagianism never took root, Palladius’ missionary efforts were largely unsuccessful.

Patrick’s visionary experiences continued, and one day he saw images of Irishmen delivering letters to him and calling, “Come here and walk among us!” By 432 AD Patrick had replaced Palladius as the bishop to Ireland, and was ministering among the people who had once held him captive.

The Mission to Ireland

Patrick’s previous knowledge of Irish culture made him an apt minister to the people. He often began by ministering to Christian slaves in the region, where he gained permission from the local kings to work among the people. His work took him to remote parts of the Island, where he usually needed the protection of a representative from neighboring tribes. These representatives were typically kings’ young sons who often turned on him and stole from his team.

Patrick’s work among the slaves and people on the fringes helped him gain a footing among the people, much like in early Christianity. Christian slaves then began converting the children of Irish kings, and so the gospel spread even to the powerful among the Island. Whereas the church in Britain and Rome believed that people like the Irish were pagans merely fit for slavery, Patrick taught that God cared for them. In this way, networks of contacts and small churches spread throughout the land.

But Patrick’s adversity in Ireland did not end with his escape from slavery. He endured regular persecution in the form of beatings, robbery, and near death. The greatest blow to his mission was at the hand of Coroticus from England, a ruler of Roman-British descent who gained power by helping defend against invading German tribes. But his greed made him turn his eyes to Ireland, and so the defender became an invader himself.

One day Coroticus’ men raided and captured newly baptized converts who were returning home from their time with the church. With deep indignation, Patrick wrote an open letter—in his voice as bishop—to the Soliders of Coroticus and the public: “Notice I don’t call you my fellow Romans—no, your crimes have made you citizens of hell!” Through his condemning letter which demanded the release of the kidnapped Christians, Patrick effectively excommunicated him, without the authority of the church in Britain.

The letter must have angered British Christian leaders who were turning a blind eye to the crimes of men such as Coroticus, on whom the church depended for protection. So Patrick was summoned by the British church and had his past scrutinized, resulting in charges of corruption and other sins that disqualified him from the ministry. But Patrick refused to go, knowing they would not allow him to return to Ireland. His response to the charges of the British church is titled Confession.

By reading his own words, it is difficult to deny his heartfelt love for the Irish people, to whom he devoted his life: “If I have ever done anything worthwhile for the God I love, I ask that I might be allowed to die here for his name with these converts and slaves—even if it means that I won’t have a marked grave or that my body is torn apart piece by piece by dogs or wild animals or that I serve as a meal for the birds of the air.” His words about an unmarked grave came true.

A handful of legends exist today about Patrick’s extraordinary feats, such as his supernatural fights with Druid priests, his driving of all snakes from the island, and using the shamrock to teach people about the Trinity. Though we can’t be sure how far back these stories go, most of them emerge from late, medieval biographers.

What we do know is that after his death around 460, his impact on the island was profound, so much so that he initiated a missional impulse among the people. Only a hundred years later, monastic monks and other clergy were wanting to carry the gospel even beyond Ireland itself, which was originally thought to be the end of the earth. One monastic monk in particular—Columbanus—left Ireland to bring the gospel back to the continent of Europe, where Roman regions that had previously been Christian were now under pagan dominance.

Patrick’s work among marginalized people, his concern for navigating carefully through the local cultures, and his simple gospel message of God’s providence and love for the world make him a saint worth remembering.