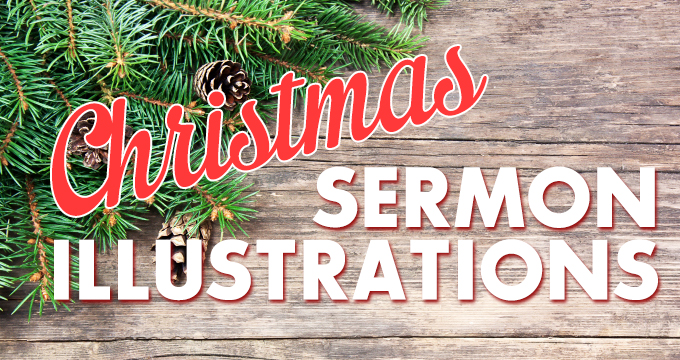 Each Advent season, God invites us anew to reflect on the beauty of the incarnation—the mysterious act of the Word becoming flesh and dwelling among us.

I hope these images will help you contemplate Christmas, complete a sermon, or come close to the feet of Jesus in worship.

1) A Commando in Enemy Territory

In my mind’s eye, on Christmas Eve I see a single commando tumbling out of the bomb bay doors of a B-52 at 30,000 feet. He falls silently in the midnight darkness into enemy territory. Satan sleeps, not knowing that he will organize a rebellion. The empire of sin will fall, not from without, but from within. … Like a commando severely hurt as he landed from far above, who has no apparent capacity to mount an effective action, or for that matter any action at all, the powerless infant turns his face to ours and makes what, in that obscure stable, seems like a crazy, impossible demand: “Join me.”- R. R. Reno, Christmas Draws Near

2) A King Entering a City

You know how it is when some great king enters a large city and dwells in one of its houses; because of his dwelling in that single house, the whole city is honored, and enemies and robbers cease to molest it. Even so is it with the King of all; He has come into our country and dwelt in one body amidst the many, and in consequence the designs of the enemy against mankind have been foiled and the corruption of death, which formerly held them in its power, has simply ceased to be. For the human race would have perished utterly had not the Lord and Savior of all, the Son of God, come among us to put an end to death. – St. Athanasius, On the Incarnation

Life in a prison cell may well be compared to Advent: one waits, hopes, and does this, that, or the other—things that are really of no consequence—the door is shut, and can only be opened from the outside. – Dietrich Bonhoeffer, God is in the Manger

4) Salvation Happens in the Body

Bodies are central to the Christian story. Creation inaugurates bodies that are good, but the consequences of the fall are written on our bodies–our bodies will sweat as we labor in the fields, our bodies will hurt as we bear children, and, most centrally, our bodies will die. If the fall is written on the body, salvation happens in the body too. The kingdom of God is transmitted through Jesus’s body and is sustained in Christ’s Body, the church. Through the bodily suffering of Christ on the cross and the bodily resurrection of Christ from the dead, we are saved. Bodies are not just mirrors in which we see the consequence of the fall; they are also, in one theologian’s phrase, “where God has chosen to find us in our fallenness.” – Lauren Winner, Real Sex

How can the human race be rescued out of rebellion and avoid inevitable condemnation when everyone, without exception, is bound under sin? The only way is to bring another Adam into the world; someone who, like that first Adam, was without sin and who could once again have the choice to obey or disobey, but this time get it right. In other words, there had to be a way to go back and rewrite that first chapter of the human story recorded in Genesis chapter three on the Fall of Man. – Tim Tennent, Thirty Questions: A Short Catechism of the Christian Faith

7) A Free Act Enabled by Grace

The virginal conception occurred entirely by consent, not coercion. The virgin Mother was receptive to the divine address. As the incarnation of the Son was voluntary, so was the virginal conception. Mary was willing to be the human bodily means by which the Word became flesh, even as the Son assumed flesh voluntarily. As the Savior’s conception was voluntary but without works of merit by grace, so is the believer’s new birth into the Christian life voluntary yet entirely by grace. Mary consented without impairment of the liberty that made her human. “It was only after having instructed her and persuaded her that God took her for His Mother and borrowed from her the flesh that She so greatly wished to lend Him” (Cabasilas, “Homilies Mariales Byzantines,” Patrologia orientalis 19, 3). – Thomas Oden, Classic Christianity

8) Moving into the Neighborhood

The Word became flesh and blood, and moved into the neighborhood. – John 14:1, The Message

9) His Weakness as Our Virtue

When we begin with a vague notion of what God is like we tend to project our own experiences, for better or worse, in formulating this image. … The secret to understanding who God is and consequently who we really are is to start with Jesus. The problem is that there are a lot of versions of Jesus out there. The only trustworthy way to understand Jesus is to study His Word with others in the power of the Holy Spirit. – Carolyn Moore, Encounter Jesus

I wanted to write to you about the love of God become visible in Jesus. How is that love made visible through Jesus? It is made visible in the descending way. That is the great mystery of the Incarnation. God has descended to us human beings to become a human being with us; and once among us, he descended to the total dereliction of one condemned to death. It isn’t easy really to feel and understand from the inside this descending way of Jesus. Every fiber of our being rebels against it. We don’t mind paying attention to poor people from time to time, but descending to a state of poverty and becoming poor with the poor—that we don’t want to do. And yet that is the way Jesus chose as the way to know God. – Henri Nouwen, Letters to Marc about Jesus

It should be noted that the sign given of the Savior’s birth is not a child enfolded in Tyrian purple, but one wrapped in rough pieces of cloth. He is not to be found in an ornate golden bed, but in a manger. The meaning of this is that he did not merely take upon himself our lowly mortality, but for our sakes took upon himself the clothing of the poor. Though he was rich, yet for our sake he became poor, so that by his poverty we might become rich. Though he was Lord of heaven, he became a poor man on earth, to teach those who lived on earth that by poverty of spirit they might win the kingdom of heaven. – Bede, Exposition of the Gospel of Luke

14) The Climbing Down of God

“The nativity mystery” means that God became human, truly human out of his own grace. The miracle of the existence of Jesus, his ‘climbing down of God’ is Holy Spirit and Mary! Here is a human being, the Virgin Mary, and as he comes from God, Jesus comes from this human being. Born of Mary means a human origin for God. Jesus Christ is not only truly God; he is human like every one of us. He is human without limitation. Not only similar to us, he is like us. – Karl Barth, Dogmatics in Outline